The explorer has notched up some extremely successful results from the first 25 of the planned 395 holes at Marao. Besides, strong visually estimated (VIS EST) heavy mineral results from drilling close to the camp have delivered MRG Metals’ first HMS mineralised target at Marao - the Magonde Target (Figure 2). 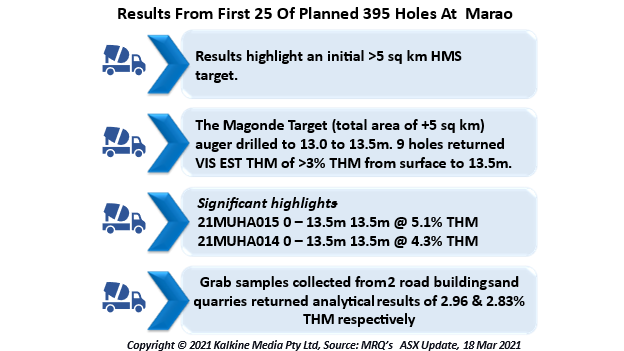 An exploration base camp was constructed on site. Then, the company kicked off a reconnaissance hand auger grid drillhole program of around 395 holes at 500m X 1000m hole spacing. To date, 25 holes have been finalised.

The program was initiated in vicinity of the site where the Marao base camp was being constructed. This was done for logistical reasons, so that the onsite senior staff could conduct the drilling and simultaneously be involved in the camp construction, without significant travelling.

The exploration camp is now complete. Now, the auger drilling program’s focus will expand and begin in the south western sector of the Marao licence. 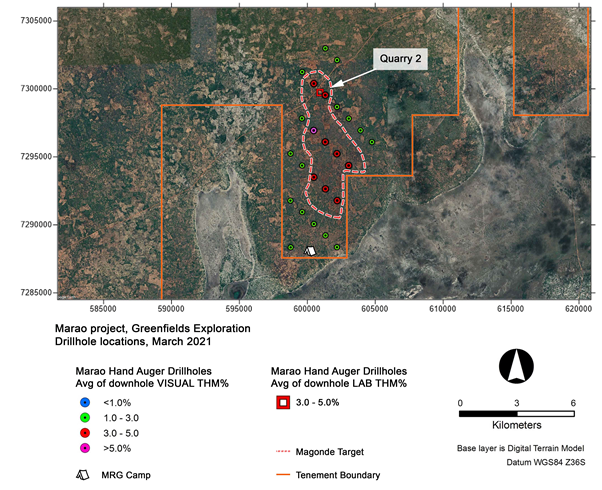 Grab samples from surface were collected from two road building sand quarries within the Marao licence. These are currently being investigated for the mineral assemblage.

Further mineral assemblage examinations remain in pipeline. These would be conducted from material generated during the drilling program. This is likely to both define as well as quantify the Valuable Heavy Mineral content (of the Heavy Mineral Concentrate).

Besides, the explorer will shortly wrap up aircore infill drilling at Nhacutse high-grade target. Upon completion, the drill rig will be moved to a 30 drillhole infill aircore drilling program at the Koko Massava target.

Will infill Aircore drilling at Nhacutse give MRG Metals (ASX:MRQ) its second MRE?