QX Resources Limited (ASX:QXR) announced entering into a binding agreement with Redstone Metals Pty Ltd (Redstone) to conduct due diligence on the Turner River lithium project (ELA 45/6042) in Western Australia. Perth-based minerals exploration and development company entered into a binding option agreement to acquire a 100% stake in the Lithium project in the world-class lithium province of the Pilbara. The explorer holds the rights for 30 days to conduct due diligence.

Bourses welcomed the significant market update as the shares of QX Resources jumped ~53.85% to AU$0.02 a share on 30 September 2021 at 11:19 AM AEST. In the past month alone, the stock has surged by over 100% on the back of promising outcomes of the latest exploration projects and highly prospective acquisitions. 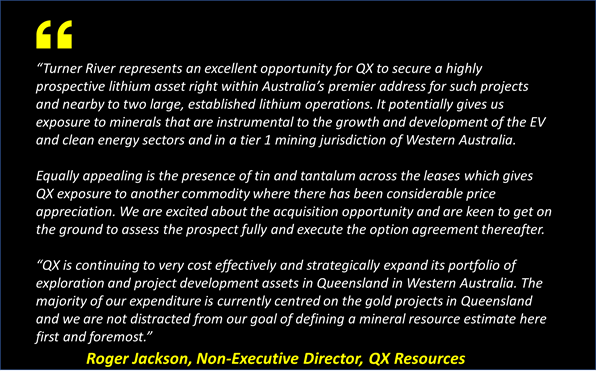 The Turner River Lithium Project stretches over tenement application, ELA45/6042, over 45km2 and is located 12km south of the access turn-off for the Mineral Resources Limited’s (ASX:MIN) and Albemarle-owned Wodgina mine site. The project is located 120km from the Port Headland with access to the Great Northern Highway. 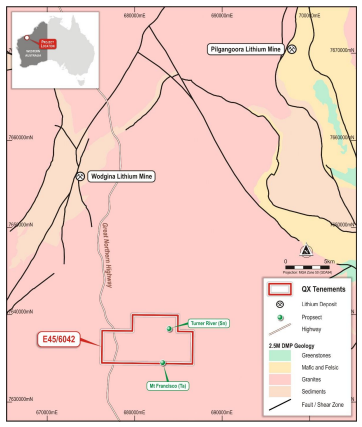 The Pilbara province is home to numerous world-class hard rock lithium projects, including Pilgangoora (309Mt @ 1.14% Li2O) and Wodgina (259Mt @ 1.17% Li). The project, Turner River, consists of Exploration Licence application, covering 45 km2, and is located ~17km south of the Wodgina mine and ~30km southwest from Pilgangoora.

Apart from lithium, the project is considered highly prospective for tin and tantalum and includes historic alluvial tin workings on the Turner River. Regional geology of the Wodgina Greenstone Belt is dominated by mafic volcano sediments with smaller-yet-substantial quantities of epiclastic sediments, cherts and BIF's. Regionally, the lithium hosting pegmatite is concentrated near N-NW trending lineaments, faults or granitic dykes.

Exploration so far and QX’s Plans

The exploration activity at the Turner River lithium project comprises geological mapping and geochemical sampling programs. The historical exploration work is limited and sporadic in nature. The project includes the historic Turner River tin prospect in the northeast section of the tenement, while the Mt Francisco alum prospect is situated in the south.

During the 30-day option period, QX will undertake further desktop review of all publicly available data, prior to the planned 3-day site visit by the technical team. The company’s technical team would undertake geological mapping and would delineate the potential prospective outcropping units during the field work in coming weeks.

QX Resources and Redstone have entered into a 30-day exclusivity agreement to conduct due diligence studies upon the payment of AU$10,000 (already paid). If QX Resources exercises its option to acquire a 100% stake in the lithium project, Redstone would be entitled to a stock consideration of 12 million fully paid shares of QXR. The ownership transfer is contingent on the granting of the tenement application and the ministerial consent.