The Company with Cash and Cash equivalents of over AU$19.33 million remains in a strong financial position to fund exploration ventures at its gold project portfolio. Musgrave’s financial footing is further strengthened by its shareholding in Legend Mining Limited and Cyprium Metals Limited, with a combined value of approximately AU$1.2 million as of 22 October 2021.

During the quarter, Musgrave has been mainly focussed on regional exploration on its wholly-owned tenure at Cue.

The program has continued to define strong gold mineralisation across multiple targets, with best results received at high priority Target 14, White Heat and Big Sky Prospects. All targets have been characterised by encouraging near-surface gold mineralisation, driving the Company to kick off with resource definition drilling at Big Sky and White Heat.

White Heat is located 300m south of Break of Day, a high-grade gold deposit on the Cue Project. The prospect has a strike extent of approximately 70m and is open down plunge. The Company received high-grade results from the three diamond holes completed at White Heat.

RC drilling continued to define regolith gold mineralisation over a 2.6k long trend, 2km southwest of Break of Day, where it remains open down dip. Infill RC resource definition drilling is ongoing at Big Sky with the focus to delineate a maiden Mineral Resource in second quarter of 2022. 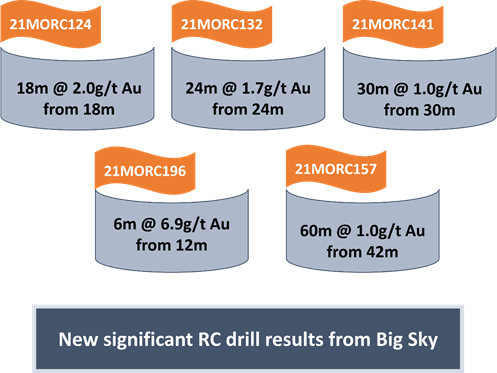 The Company reported that 141 drill holes for 13,799m had been completed in the ongoing Phase three program. Further, post September Quarter-end, assays for the first 32 drill holes in the aircore program were reported, highlighting solid results in the West Island area. The encouraging results extend the regolith gold anomalism to more than 1.6km of the strike, where it remains open to the north and south.

In the current program, nine diamond drill holes for 2,850m (of a planned total of 7,000m) have been drilled on the Lake Austin area, with seven holes completed at West Island. The assays for the first two diamond holes received are significant and includes:

Road Ahead for Musgrave Minerals’ Exploration

A number of activities are in the pipeline at Musgrave 100% exploration ventures. These include: 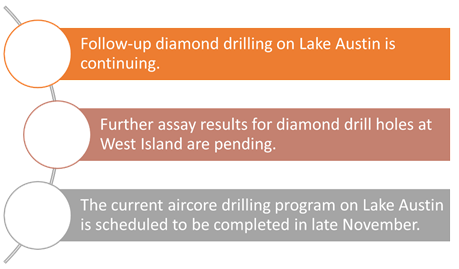