Gold explorer Middle Island Resources Limited (ASX: MDI) has been focussing on activities at its Sandstone gold processing plant and had previously commenced Phase 3 RC drilling campaign. The Company has been steadfast on its strategy to make significant progress on Sandstone’s feasibility study (FS), which is close to being concluded. 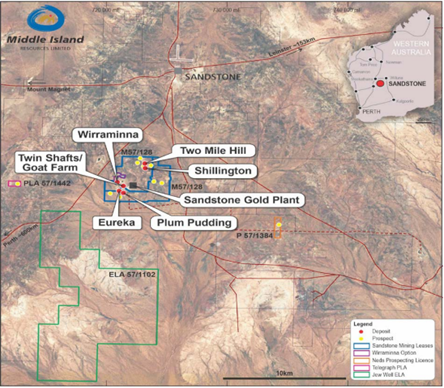 MDI received final contract mining costs last week, and these are to be reviewed and incorporated into the Feasibility Study (FS) to re-commission. Moreover, this would also be needed for the expansion of the Scoping Study (SS) at the Sandstone gold processing plant.

Furthermore, the Company has already completed the technical work like pit geotechnics, water supply, tailings storage, metallurgy and environmental aspects associated with the feasibility study. Notably, no material issues were identified during the process.

The Scoping Study evaluated the existing gold plant at Sandstone being expanded to 750ktpa and indicates an attractive outcome upon identification of additional mill feed, including from third parties.

MDI continues to reflect upon the opportunities concerning regional consolidation at the Sandstone and has retained Argonaut. Through this, the Company aims to pursue and promote such value accretive transactions that are potent for attaining value for all parties that may not otherwise be available to those entities independently.

The Company prioritises the access to nearby third-party deposits as well as and wider consolidation of the Sandstone district. Moreover, the Company is advancing discussions for this purpose.

The Company had also planned several critical activities at the Sandstone project during the March 2021 quarter that include completion of the following:

Other than these, MDI had plans to compile and report Phase 3 drilling results, progress re-commissioning financing, finalise various contract tenders and estimate updated Mineral Resources for several deposits at the Sandstone Project.

All in all, MDI has been on an exciting journey at its Sandstone Project and has crossed several milestones and outcomes of the feasibility study is now awaited.

MDI looks forward to finalising the feasibility study report as well as scoping study report in the coming few weeks.