Recent geochemistry and aeromagnetic programs undertaken on the project, together with drilling information recently announced by Core Lithium Ltd (ASX:CXO), suggest multiple swarms of lithium-caesium-tantalum (LCT) pegmatites that extend from the adjacent Finniss Lithium Project into the Bynoe Lithium Project.

The assay results of the 2021 soil geochemistry program, which generated around 3,000 samples, have been merged along with the pre-existing data and interim comments received from the consultant geochemist.

The results suggest that pegmatite swarms have been emplaced within two large zones - Megabucks Zone and 7-Up Zone. 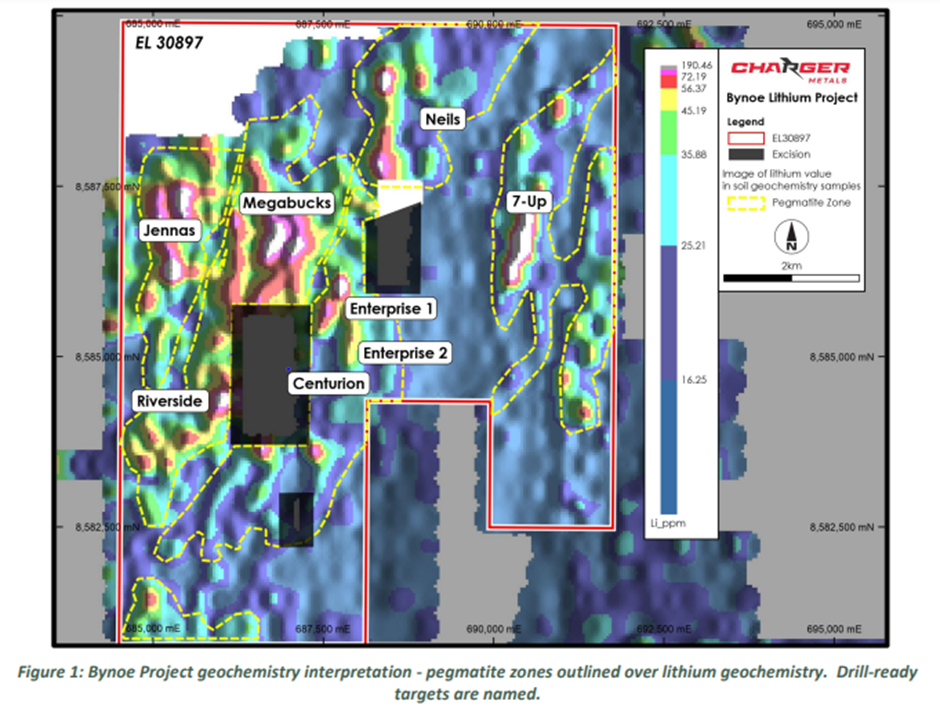 Drill-ready lithium targets have been identified within each pegmatite zone and consists of Megabucks, Jenna’s, Enterprise 1, Enterprise 2, Riverside, and 7-Up pegmatites. Despite the different soil geochemistry signature of each lithium anomaly, all are generally multi-elemental in nature.

Coincident elements consist of all or some of beryllium, tin, caesium, and rubidium. Notably, these are classic element associations of lithium endowed LCT pegmatites.

The aeromagnetic survey imagery on the Bynoe Lithium Project indicates the recently intersected high-grade spodumene mineralisation at Core Lithium’s Ah Hoy prospect, which is located 3km northeast along trend from the 7-Up prospect.

Moreover, the recent drilling by Core Lithium also intersected lithium fertile LCT pegmatites at Centurion, which is located 600m southwest along trend from the Enterprise 1 Prospect on the Bynoe Project.

The partners are advancing with planning and permitting for the maiden drill program at the Bynoe Project. Priority targets, such as those at Megabucks, 7-Up pegmatites, Jenna’s, and Enterprise are being prepared for drilling following the Northern Territory wet season.