The Australian explorer in its latest update has highlighted that the gold mineralisation achieved from the first phase helicopter reconnaissance is very encouraging.

The Company announced a high-grade gold result of 7g/t Au from rock chip grab sampling in the Middle Branch area, which is a newly discovered area of veining. 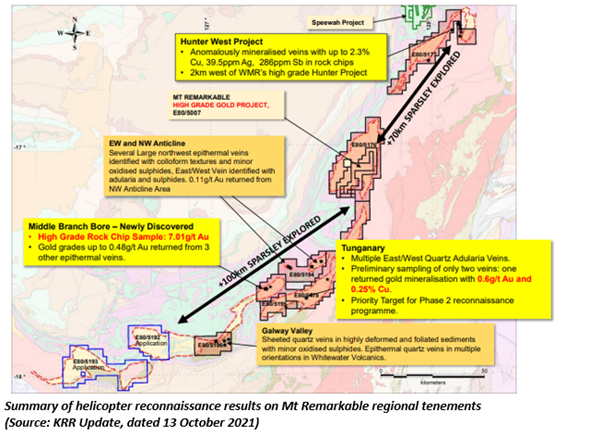 The Middle Branch area is exposed at the centre of an eroded anticlinal dome. Multiple epithermal vein structures have been discovered, with all sampled veins returning anomalous gold values.

The Middle Branch area has been prioritised for further reconnaissance before drill targeting.

Malachite and oxidised sulphides were identified in some of the quartz adularia veins. Moreover, significant results were returned from two veins sampled in the program.

Due to the structural complexity and multiple veins, the Company has prioritised the area for detailed mapping and sampling in subsequent land-based reconnaissance visits.

During helicopter reconnaissance of the Hunter West area, KRR identified numerous east-west trending quartz breccias with minor adularia, with several of them having associated malachite and oxidised sulphides.

While no significant gold values were returned, the assay results were encouraging and consisted of copper (up to 2.3% Cu), antimony (up to 286ppm Sb) and silver (up to 39.5ppm Ag).

The Company has planned further reconnaissance work in the area.

How is KRR’s gold exploration progressing?

KRR is advancing gold exploration in its Mt Remarkable and Tennant Creek project areas. At Mt Remarkable, the Company is undertaking reconnaissance with a further 301 rock chip grab samples collected, for which assays are pending.

The Company has planned airborne magnetics and VTEM Surveys planned for the Barkly East project tenements with the best results planned to be prioritised for drilling.