In a significant development, Jindalee Resources Limited (ASX:JRL) has announced the estimation of an Exploration Target Range (ETR) for the Lyons River deposit. The Lyons River magnesite deposit is a part of the Company’s wholly owned Prospect Ridge Project. 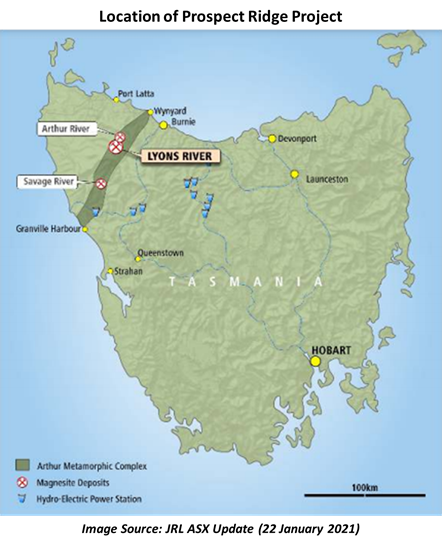 The project is situated in the north-west region of Tasmania. It comprises both Lyons River and Arthur River magnesite deposits. Since the acquisition of the Prospect Ridge project in May 2016, the Company has steadily progressed the project with the conversion of the historic resources into JORC 2012 compliant equivalents.

The ETR has been estimated on the basis of 37 diamond drillholes finalised by CRA Exploration (now Rio Tinto) between the years 1982 and 1989. Open at depth, mineralisation at Lyons River is delineated over a 400m wide, 300m deep, 2km strike.

Jindalee has highlighted that the Lyons River ETR exhibits the potential to boost the existing Mineral Resource base at its Prospect Ridge project.

The Arthur River Mineral Resource lies 6.5km north along strike of the Company’s Lyons River deposit, with the area between the two deposits just lightly explored.

Jindalee believes that an increase in the current Mineral Resource at the Prospect Ridge project can positively influence the economics of any kind of mining study at the project. The Company has designed a 3,000m diamond drill program to infill the Lyons River deposit to provide the required confidence in geological continuity and grade needed to advance the ETR to a Mineral Resource.

Magnesium carbonate (MgCO3) or magnesite is the main source of magnesia or MgO. About 90% of the total annual production of magnesia (~9.4Mt) comes from magnesite feedstock. The remaining 10% is obtained from seawater and magnesia rich brines.

Magnesia and magnesium brines are utilised to produce magnesium metal (Mg). Magnesium is one of the lightest metals carrying atomic number 12, which is usually alloyed with aluminium to produce a high-strength, light, and corrosion-resistant alloy. Magnesium is commonly used in the below industries:

Amidst growing importance of magnesium, the Company is tapping a potentially lucrative market opportunity in the magnesite space via its Prospect Ridge project. Notably, the European Commission included magnesium in its latest list of 30 EU Critical Materials, owing to the solid forecast in demand for magnesium.

Jindalee is actively undertaking discussions with prospective project partners seeking to continue developing the Prospect Ridge project. Going forth, further resource infill drilling, routine bulk density estimation, metallurgy and geotechnical logging are likely to be carried out at the project.

Do Not Miss: Why Jindalee Resources’ (ASX:JRL) Shares Skyrocketed in 2020?