BlackEarth Minerals NL (ASX:BEM) is in a sweet spot as latest results have validated the enormous potential value of the Razafy Northwest area at the Maniry graphite project in southern Madagascar.

In May this year, the Company commenced a diamond drilling program targeting the shallow high-grade Razafy Northwest area.

In late-August, the Company announced the intersection of high-grade graphite mineralisation over wide intervals in line with previous trenching results.

In a significant update, the Company has announced the latest high-grade assay results, which have extended the previously reported intersections at Razafy Northwest.

The intersections following the extension now include:

A lens through recent metallurgical progress

The preliminary metallurgical test work undertaken at ALS Perth included testing of six samples produced from the diamond drilling program at Razafy Northwest, with head grades ranging from 3.64% to 20.82%TGC.

In his comment on the latest Razafy Northwest drilling outcomes, BlackEarth Managing Director Tom Revy indicated that these results demonstrate the enormous potential value present in the northwest area.

He stated that the Maniry deposit, due to increased widths, continuity of high-grade and metallurgical results, is comparable to the best projects in the world.

The project is sensitive to feed grade, and the results received so far from the Razafy Northwest area demonstrate the potential to significantly enhance the total project economics. 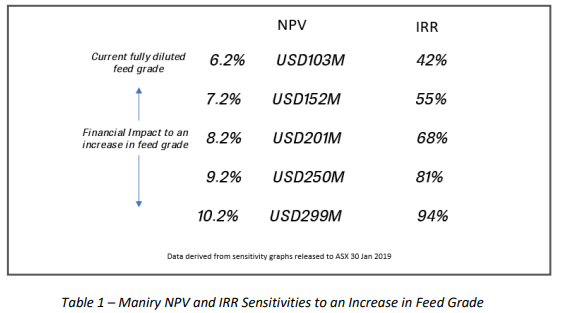 Final results from the Razafy Northwest drilling campaign are anticipated to be reported in early October. The results will be used to update BlackEarth’s resource inventory, which will be released to the market in Q4 2021.

In addition, the Company intends to finalise a New Resource Model following the receipt of the final results.

Stock performance - Following the significant update, BEM shares rose by around 4%, trading at AU$0.14 on 22 September 2021.