In an upbeat market update, First Au Limited (ASX:FAU) announced the granting of two of the three-tenements at the prolific Mabel Creek area of northern Gawler Craton, South Australia. The granted tenements together stretch over 838km2.

Furthermore, the Company also announced the appointment of Mr. Ryan Skeen as the new Chief Executive Officer. Mr. Ryan Skeen took over the charge at First Au immediately as of 26 July 2021.

Responding to encouraging updates, the market participants welcomed the slew of positive updates as FAU shares traded ~18.18% higher than the previous close at AU$0.013 a share, with a market capitalisation of AU$6.76 million.

New CEO to lead FAU from the front

Mr. Ryan Skeen, the new CEO, is a seasoned finance professional with extensive experience across wealth management and corporate advisory. He has also been involved in financial services start-ups and brings on board his critical exposure to corporate development.

Further strengthening the existing board at FAU, he brings complementary skills to lead, support, and contribute to developing the Company's strategy. Additionally, Mr. Richard Revelins will now serve as FAU’s Non-Executive Director.

“I am delighted that Ryan is joining First Au as CEO as we continue to progress our operations, particularly at our Victorian Goldfields project. Ryan will make an invaluable addition to the First Au team to support the long-term growth and strategic objectives of FAU. I look forward to the contributions he will bring to the Company.”

Mabel Creek Copper Gold Project: Another ace in the making 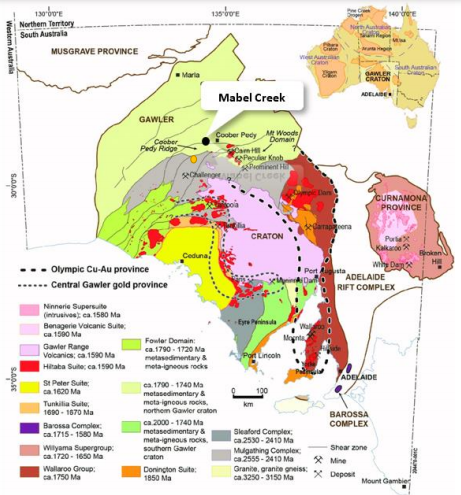 The Mabel Creek project is wholly owned by First Au and was identified as a result of project generation activities in 2020. The project tenure is surrounded by tenements owned by the mining giants BHP, Rio Tinto, FMG and Oz Minerals. The region is one of the most sought-after jurisdictions and is currently being actively explored. Recently, OZ Minerals Limited (ASX:OZL) and Rio Tinto (ASX:RIO) have applied for or have been granted tenures in the neighborhood of FAU’s ground.

The Mabel Creek area has also been identified as the winner and runner-up of the South Australian government’s “2020 Gawler Challenge”. It was identified as the key prospective areas underexplored for IOCG and Central Gawler style gold mineralisation. FAU's tenements coincide with the area identified as one of the five key gold targets by the winner of the challenge.

First Au plans to wait for all the tenures to be granted and then progress on a high-level litho-structural analysis and to target from the existing datasets. Next, the Company intends to conduct geophysics (e.g. gravity) and surface geochemistry and then proceed to the drill testing. 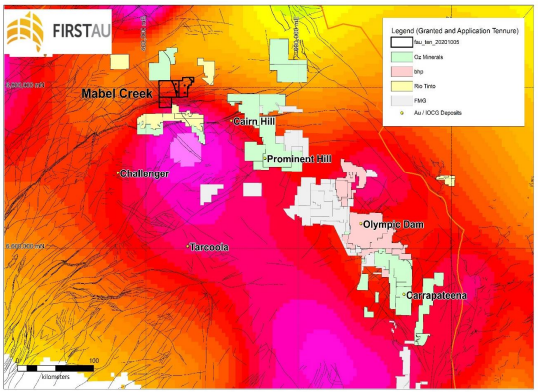 Upon the completion of the Gawler Challenge, the SA government has announced an AU$5 million Geological Survey of South Australia (GSSA) fund to delineate and advance winning concepts into prospects. The government aid will assist the explorers in unlocking new discoveries. First Au plans to apply for funding from the GSSA once all tenements are granted.