The year 2022 is proving to be an action-packed year for First Au Limited (ASX:FAU, OTCQB: FRSAF) as the minerals exploration company announced the second promising update within a week. This time, the company has received high-grade drilling results from its Snowstorm project in Victoria.

Triggered by the encouraging results, shares of FAU zoomed 8.33% on Friday to trade at AU$0.013 per share.

First Au has released assay results of the first 3 drillholes and has completed 11 out of the 14 proposed diamond drill holes at the Snowstorm Project in Victoria. The drill program targeted the gold reef system, which was highlighted by the New Structural System at Snowstorm.

The assay results from initial three holes intersected gold mineralisation within a mineralised sulphide breccia vein with grades up to 59.2 g/t Au. The significant mineralised intervals are:

Notably, the drilling program was conducted on Licences EL005505 and PL007319 within Victoria’s Swifts Creek Goldfields and was intended to expand a mineralised envelope around encouraging results received from earlier drilling, which included intersections such as -

FAU has completed the drilling of initial three holes from the same pad with targets on the continuation of the earlier high-grade intersection of SNDH002, the hole that included a high-grade vein of 0.8m with 33.3 g/t Au.

Additionally, the company's geologist also identified that the gold mineralisation occurs as a series of folded link structures hosted in NW-SE trending shear zones, based on results of drilling and field mapping. 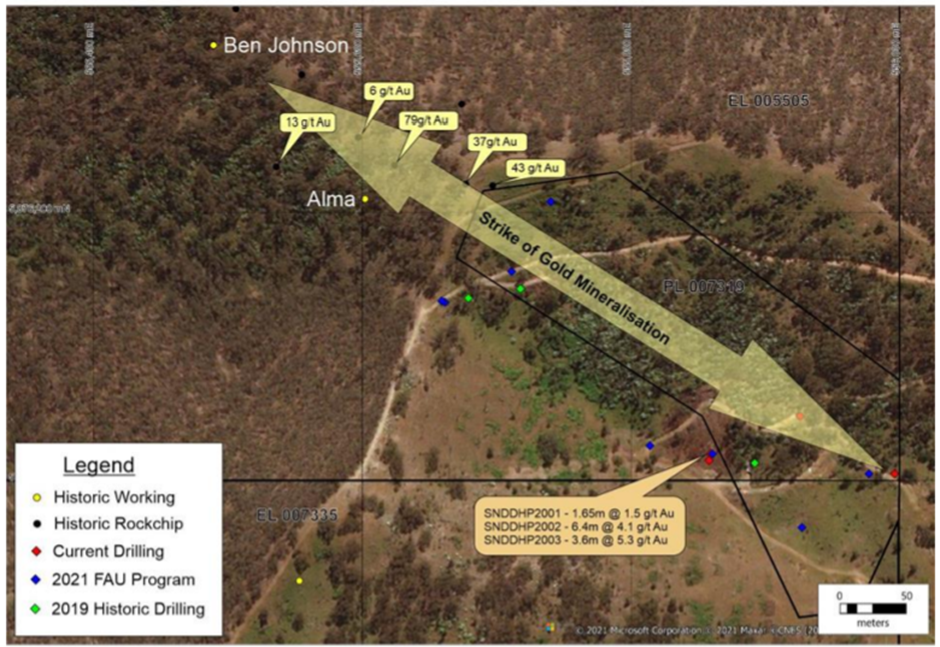 The current drilling program is targeting trending shear zones along the NW strike. Apart from the results discussed from three holes, eight more holes have been drilled to a total of 768m. Many of these holes demonstrate similar quartz veining styles and sulphide mineralisation.

The exploration so far has successfully demonstrated that the mineralisation has a vertical extent of more than 150m and holds potential far greater than 500m strike.

The ongoing drilling program is still left with 400m of drilling and is anticipated to complete by mid-February in 2022.