The 3500m drilling programme, which commenced in early January 2021, has so far returned encouraging results, thereby taking forward Cyprium’s strategy to drill out the resource at the Nanadie Well project. 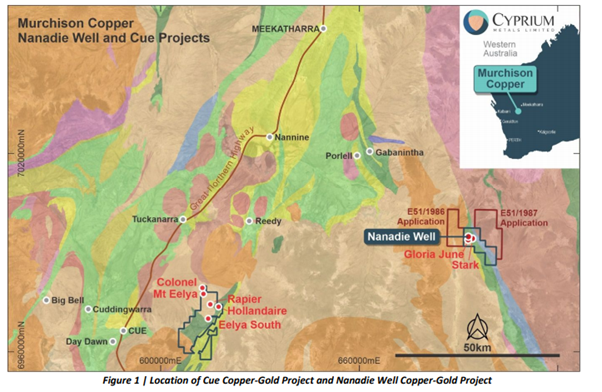 The Company undertook preliminary investigations which have indicated that there lies supergene mineralisation potential over the full and currently defined 750 metres of strike.

The supergene consists of mineralised intersections for metals such as copper, gold, and silver. Meanwhile, the previously drilled RC rock chips consisted of oxide copper minerals like malachite, which can be rapidly leached on sulphuric acid treatment.

The Company’s Phase 1 RC drilling is committed to testing the supergene mineralisation at the Nanadie Well deposit.

The Company plans on preparing a JORC Code 2012 compliant mineral resource estimate (MRE) which will utilise data from the ongoing RC drilling and subsequent programmes at the Nanadie Well deposit. The release of the MRE for the project is anticipated in H2 2021.

Meanwhile, Cyprium is also advancing a scoping study on the Murchison Copper-Gold Project (Cue Project and Nanadie Well) and will include the mineral resource delineated by the exploration programmes.

Commenting on the latest update of the reverse circulation drill programme, Executive Director Barry Cahill stated that visible copper supergene mineralisation like malachite, chrysocolla and azurite have been observed in the RC chips from the drilling to date.

He indicated the presence of visible minerals to be very exciting, and added that the Company intends to submit samples to the assay laboratory for analysis. Mr Cahill highlighted the ease of leachability of Supergene mineralisation which complements Cyprium’s neighbouring Hollandaire mineral resource that has a massive sulphide orebody with proven acid-generating capacity.

The Company is looking forward to the programme results that would be used for further exploration endeavours at Cyprium’s project portfolio.