Uranium is the most common choice for nuclear power generation. Kazakhstan is the global leader in uranium extraction, followed by Africa and Canada. Russia is also a prominent player in the market.

The average price of uranium in 2021 was US$36.5/lb. The lower price for a long period of time has led to the closure of several uranium exploration projects. However, uranium prices are forecast to rise, requiring long-term prices in the vicinity of US$60/lb to US$70/lb to incentivise new uranium mine development and allow a sustainable supply industry.

As deferred or cancelled projects and disturbance in Eastern Europe have led to a potential shortfall in the market, uranium outlook looks positive. There have been growing investments in the energy commodity. 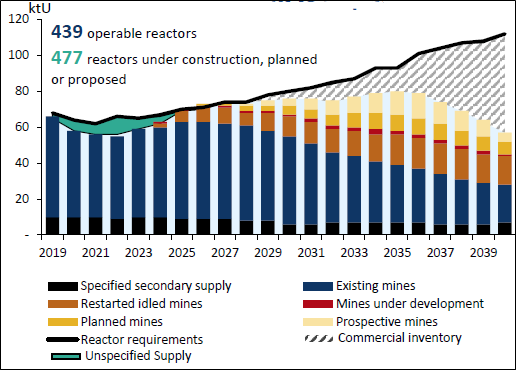 Having identified the growing trends, Deep Yellow Limited (ASX:DYL|OTCQX:DYLLF) has embarked on a journey to emerge as one of the key players in the global uranium market. The ASX-listed company operates its uranium project in the highly attractive uranium jurisdiction of Namibia.

Moreover, it is all set to boost its portfolio of world-class projects with a recently announced merger deal with Australia-based mineral explorer Vimy Resources. The merged entity will have one of the world’s largest attributable resource inventories and a strong balance sheet to carry out development activities across the projects in Australia and Namibia.

The merger deal will involve 100% acquisition of fully paid ordinary shares of Vimy. Post completion of the deal, Vimy shareholders will receive 0.294 shares of DYL for each share and will have a 47% interest in the new merged group.

One of the world’s largest resource inventories

The merged group will have a resource inventory of 389Mlbs, highest among its peers and one of the largest in the world. The merged entity will have a market cap of AU$658 million and have a strong balance sheet with cash and cash equivalents of AU$106 million (as of 31 December 2021), with zero debt.

The merged group will act on a dual strategy to develop current advanced assets (Mulga Rock and Tumas) while expanding through acquisitions to achieve greater scale with high-quality mining assets.