Troy mined 1,190,752 tonnes of material during the quarter from Hicks 4, Spearpoint and Goldstar pits. Ore mined was 8% higher than the forecast value for the quarter, though the total material mined was 10% below the forecast due to lower ore and waste mining. The mill processed 200,682 materials with an average feed grade of 1.23g/t Au.

Recent update: Troy Resources (ASX:TRY) back on track in March, beefs up gold production by 75%

One of the most sparkling highlights of the March quarter was the company’s total gold production, which stood at 7,333 ounces, 75% up from the previous quarter. Also, gold recovery stood at 92.4% during the quarter. The stockpiles of crushed ore were reported at 6,863 tonnes at an average grade of 1.38g/t Au at the end of the reporting period.

Exploration activities during the quarter

During the quarter, Troy undertook RC and diamond drilling programs on the brownfield as well as greenfield targets on the Karauni Gold Project. The Goldstar prospect witnessed infill RC drilling in 15m by 10m spacing. The drilling operation revealed the presence of a small resource with an occurrence of anomalous low-grade gold in a broad zone. 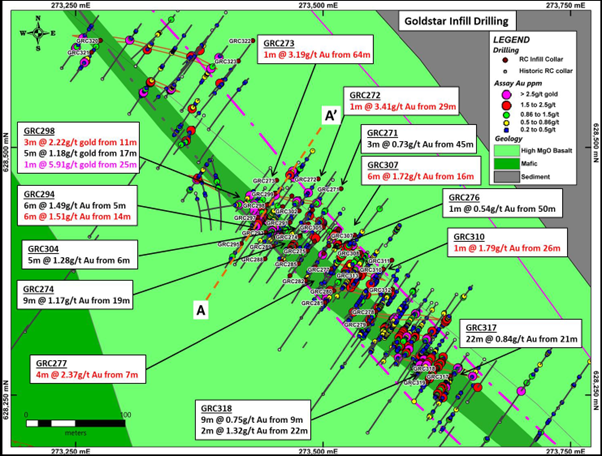 Troy concluded diamond drilling campaign on the Gem Creek prospect with encouraging results. The drilling confirmed the mineralisation, and one of the holes returned 11m @ 1.90 g/t Au from 80m and 6m @ 7.30 g/t Au from 102m. The prospect holds gold mineralisation in shear contact of younger sediment with MgO clastic volcanic and felsic intrusion with quartz veining and pyrite alteration. 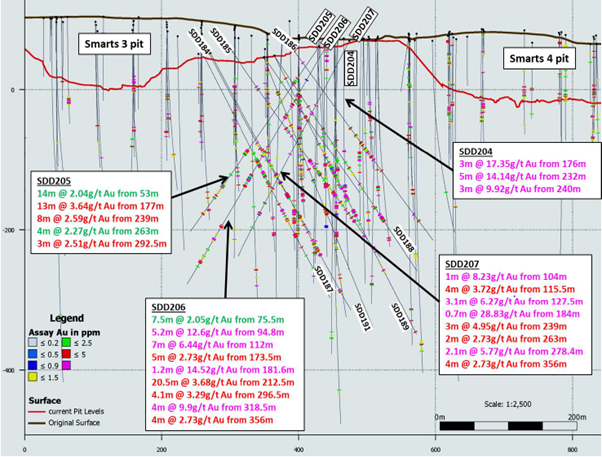 Troy added a highly prospective tenement to its portfolio through three successful deals with Guyanese vendors. The newly acquired tenement lies along the Makaba-Kuribrong Shear Zone (MKSZ) and covers nearly 10 km of strike in one of the major shear zones in the Guiana Shield.

Field mapping and sampling programs back in 2019 and 2020 confirmed the presence of the shear zone, and rock samples had returned gold mineralisation up to 2.87g/t. 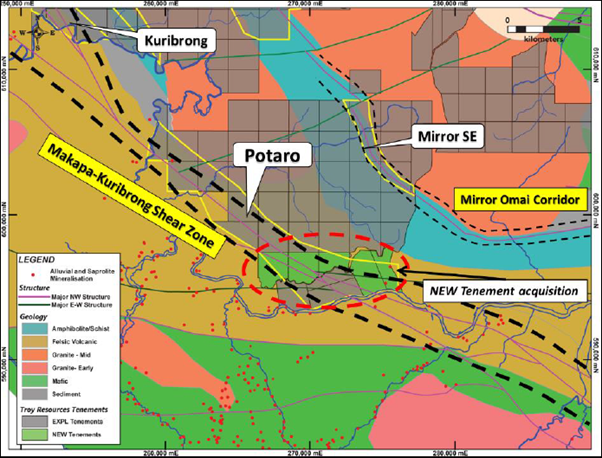 During the March quarter, Troy undertook a field mapping program on the newly acquired tenements. The targets in Mirror SE were visited, and laterite fragments along the creek indicate possible bedrock source.

A mapping program between the Potaro and Kuribrong targets lying along the prospective Makaba-Kuribrong Shear Zone is also in progress, currently.

The Total Recordable Injury Frequency Rate (TRIFR) for the 12-month period recorded to be 6.9, while the Lost Time Incident Frequency Rate (LTIFR) for the same period was reported at 4.6. For the March quarter, a total of four incidents of first aid and medical incidents occurred with several equipment damaged reports.

All incidents were investigated and recorded, and lessons to be learnt were shared across the Company’s mine site.

Troy is taking all preventive steps to safeguard its employees from getting infected from COVID-19.

However, COVID-19 continues to affect the mining operations on the project. The travel restrictions are hindering the movement of expatriates and affecting staff availability on the project. Troy is monitoring the situation across the mine site on a daily basis and ensuring the safety of all employees.

Higher than average rainfall and unavailability of trucks and excavators have also impacted the operations negatively.

Troy reported an exploration expenditure of AU$1.56 million during the quarter, while expenses against plant and equipment at the project was around a quarter of a million.