Mount Burgess Mining NL (ASX:MTB) has a stated objective to explore and in the event of discovery, develop commercial deposits of mineral resources. After discovering the Red October Gold Deposit in WA and three kimberlites in Namibia, the Company is currently developing the Kihabe and Nxuu Zinc/Lead/Silver/Germanium and Vanadium deposits in Botswana.

It is Mount Burgess’ intention to initially concentrate on developing the totally oxidised polymetallic Nxuu Deposit. A shallow basin-shaped deposit with a maximum depth of 64 meters, Nxuu is a potential low cost, low risk operation with possibility for onsite metal/ mineral recovery processes to be applied, thereby achieving beneficiation within Botswana.

In its recent Quarterly Report to 30 June 2020, the Company demonstrated holes that had been drilled into the polymetallic Nxuu Deposit North, together with proposed drill holes.

In due course, the Company was requested to show known mineralised domain and continuity of mineralisation with better clarity. Consequently, the five areas have been reduced to two, showing only the holes drilled to date- 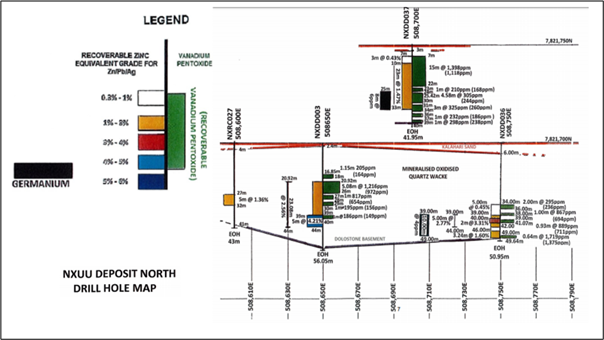 Extractive metallurgical test work on samples of Zn/Pb mineralisation in the deposit demonstrates that 93% Zn can be recovered in 12 hours through acid leach, with potential to produce Zn metal on site via SX/EW, with 93% Pb reporting to flotation concentrate.

Review of results from recent drilling campaigns, that included assaying for Vanadium, shows that mineralisation at the deposit extends beyond the zones of Zn/Pb mineralisation, increasing the overall metal endowed domains within the mineralised quartz wacke. Metallurgical test work on Nxuu mineralisation demonstrates that 80.4% Vanadium Pentoxide (V2O5) can be recovered on site via a standard oxide flotation process through hydroxamate collector for recovery.

Nxuu Deposit samples containing Germanium have been sent to the University of Naples for test work that will analyse nature and structure of the host mineral. Once out of lockdown, Naples University is likely to commence this test work. Mount Burgess believes that if shown as recoverable, a further credit for the Project would be represented, as Ge is trading at USD 1,890 per kg at present.

Previous Nxuu resource estimates only included Zn/Pb, though lately, V2O5 represents a substantial additional credit. Consequently, the Company believes that on completion of a further 2,500m of drilling, it will be able to quote a resource compliant with the 2012 JORC Code.