Kogan (ASX:KGN) to cough up $350K fine for misleading customers

The Federal Court has advised Kogan.com Limited (ASX:KGN) to pay a penalty of $350,000 for misleading consumers by inflating the prices of products and then advertising discounts on them.

The Australian Federal Court imposed the penalty on Kogan Australia Pty Ltd for the four-day coupon code promotion, initiated by the Company in June 2018.

However, in a market announcement to its stakeholders today, Kogan mentioned that the profits generated by the promotion were immaterial and the ruling would not impact the ongoing promotional activities, which were updated in 2018.

In July 2020, the Federal Court found that the Company has misled consumers by advertising the coupon code of ‘TAXTIME’, leading to a 10 per cent discount during checkouts. The court has found the promotion as an infringement to the Australian Consumer Law, highlighting that the Company inflated the original prices of over 600 products right before the promotion.

In most cases, Kogan lifted the prices by a minimum of 10 per cent but decreased the prices right after the promotion event to the pre-promotion levels.

In an official statement, the Australian Competition and Consumer Commission (ACCC) Chair Rod Sims cited that the consumers using the discount window, more or less paid the same price ahead of the promotion, even higher in some cases.

Therefore, consumers were not receiving any 10 per cent discount as advertised by the Company, affecting high-value products.

Furthermore, the Company played a human psychology card by creating a sense of urgency as it used statements such as “only 48 hours left” and “Ends Midnight tonight” to promote the sales of products available on its website.

The ACCC finding in the matter led to the court hearing, which has now ruled that the Company would pay $350,000 in penalties. 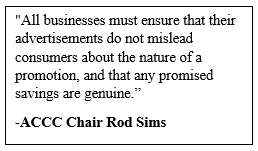 In the official announcement, Kogan mentioned that the Company now has a compliance program in place that includes protocols for the internal and the external review of promotional statements and related collaterals. 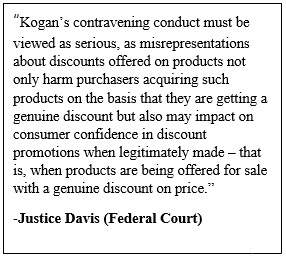 Furthermore, focusing on the concluding statement by the Federal Court, which reads:

“Kogan did not deliberately intend to engage in the contravening conduct and the material does not indicate a culture of non-compliance or disregard of the law”, the Company suggested that it is reviewing the decision and would notify the market once the internal review concludes.