When Beach Energy Ltd (ASX:BPT) announced its summary quarterly report last Wednesday, it came across as sort of a mixed bag for the investors who would have been watching its fundamentals.

Most of the elements were within the guidance provided by the company. But for the company’s shares to outperform the stock exchange, we need the company to churn out excellent results. After the guidance is discounted for by the markets: any performance which is lower than its guidance leads to selling pressure on shares, and any performance which is higher than its guidance levels, leads to buying pressure on shares.

While on a quarterly basis, the company’s revenue has jumped by 7% for the quarter ended 30 June 2021. However, at AU$1.52 billion, the company’s annual revenue saw an 8% dip, from AU$1.73 billion clocked last financial year.

Although the full results are expected in mid-August, yet for smart investors this 18-page summary handout was enough to grasp things.

Since then, BPT has underperformed the broader market as well as its peers. Let us see how? 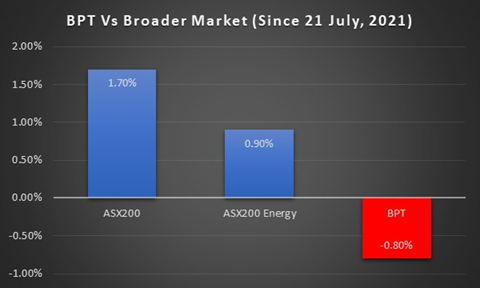 Beach Energy: After the announcement of the results, shares of Beach Energy have corrected by 0.80% in seven days and are currently trading at AU$1.24 each. Well, you might say that this movement isn’t much, but read on to know why.

ASX200 Energy: The sectoral index for the sector in which Beach Energy operates has gone up by 0.90%. This uptick has been there despite the fact that the energy market was facing an upheaval recently as the Organization of the Petroleum Exporting Countries (OPEC) and its allies were trying to restore production cuts. This uptick in ASX200 Energy would mean that Beach Energy has underperformed its peers by 1.6 percentage points, after it announced the results.

ASX200: The benchmark ASX200 has been on a record-breaking spree of late – touching new life highs every day. The benchmark has rallied by 1.7% in the past seven days – mostly driven by miners. This would mean that Beach Energy has underperformed the broader Australian market by 2.5 percentage points since the day company announced its summary results.