In this article, we discuss three innovative companies listed on the Australian Securities Exchange (ASX). These companies have gained significant investor traction over the recent months. One thing similar in these companies is that they are engaged in the development of innovative and disruptive products.

Earlier this month, the company released a progress update to the market, highlighting that quarterly objectives were achieved. Audio Pixels now has two distinct technological demonstrators working within its cleanroom.

Of these two, the first one is core single chip product capable of reproducing low frequencies, which are unattainable with speakers of similar size. The second one is a multi-chip demonstrator, which uses multiple chips to attain virtually any desired acoustic output by using multiple AKP’s single chips.

Now, the company is in a position to intensify engagement with the marketplace. To meet industry standards, it is required to assemble and package chips for collecting data outside a cleanroom, which would be done when restrictions permit.

Audio Pixels would now focus on optimisation of the product and manufacturing process to advance quantity production of its first generation of products.

The company also received a batch of hydroxychloroquine compound, which would be used to advance its research into IHL-675A for the treatment of Sepsis Associated Acute Respiratory Distress Syndrome (SAARDS).

In July, IHL reported positive results from the pre-clinical animal studies for IHL-675A. At present, it is undertaking in vitro studies to study the response of IHL-675A.

4DMedical is a global med-tech company, revolutionising respiratory imaging and ventilation analysis. Its flagship XV Technology is proven and patented. The company is changing the way how physicians manage and diagnose patients with lung disorders.

As a newly listed company on ASX, the company has gathered traction among investors. In a recent healthcare forum, 4DX noted that the respiratory diagnostic sector represents a global market of over USD 31 billion per annum. 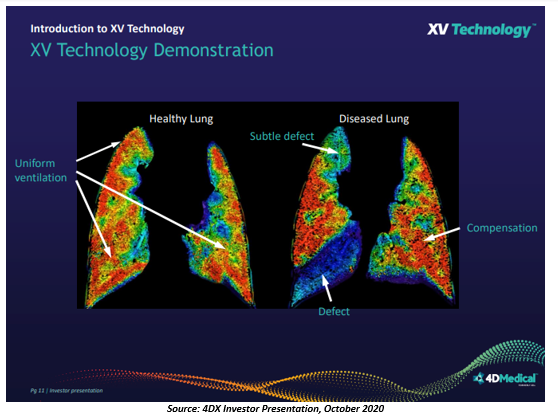 4DMedical’s XV Technology helps physicians to understand regional lung motion and airflow in real-time. It has FDA clearance and is emphasising on the commercialisation of XV Technology in the US market.

Good Read: All you need to know about 4DMedical