Among individual stocks, technology firm Pro Medicus (ASX: PME) rallied over 16% to emerge as the top gainer among the ASX pack. The stock rallied after the imaging tech company posted strong earnings for the 2021 financial year. 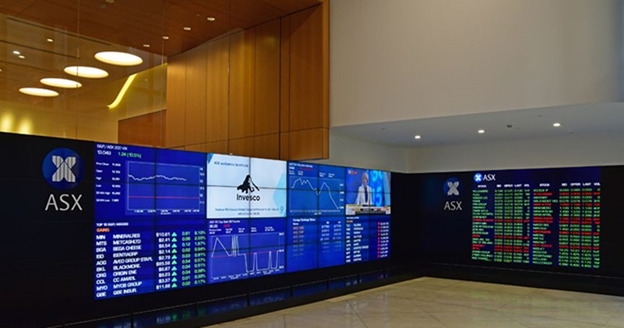 The equity market witnessed broad-based buying as eight of the 11 sectoral indices ended in the green. The A-REIT sector gained the most and settled with 1.8% gain, followed by utilities, which rose over 1.7%. Among others, telecom and industrial sector also closed with over 1% gain each.  Financial, information technology and consumer staples indices also saw surge in buying.

Bucking the trend, the material sector emerged as the worst performer, falling 2.9%. Among others, health care and energy index also ended lower.

Shares of BHP Group (ASX: BHP) declined as much as 9.4% to hit an intraday low of AU$68.69 on decision to exit petroleum business.

Oil and gas major Woodside Petroleum (ASX:WPL) shares dropped as much as 4.4% to AU$19.85 despite reporting strong earnings and interim dividend.

The share price of Silver Lake Resources (ASX: SLR) rose as much as 3% to AU$1.36 after the gold miner unveiled its earnings report.

Australian biotechnology firm CSL Ltd (ASX: CSL) dropped 2.1% to AU$291.63 on weaker earnings outlook. The healthcare company expects a weaker performance in the 2022 financial year due to margin easing as a result of increased plasma costs.

Shares of Tabcorp Holdings (ASX:TAH) fell nearly 0.9% to AU$4.81 after the firm released its earnings report for financial year ended June 30, 2021. The Group revenue rose 8.8%, while EBITDA was up 11.3% versus the last corresponding period.

South Korea’s KOSPI was the top performer in the region, rising 0.95%. It was followed by Straits Times in Singapore, which gained 0.9%. Taiwan’s Weighted Stock Index surged 0.6%, while India’s BSE Sensex rose 0.5% in opening trade.

Moving on from Asia to the US now, Wall Street ended lower in overnight trade as investors scaled down their risk appetite. The Dow Jones dropped 0.8%, the S&P 500 fell 0.7%, and the NASDAQ tumbled 0.9%.

All major cryptocurrencies extended fall for the second day on Wednesday, with popular coins such as Bitcoin, Ether and XRP floating in the red. Traders seemed to have taken a pause after recent rally and resorted to profit booking.

Bitcoin, the world's largest cryptocurrency by market capitalisation, dropped 3% to around US$45,000 levels. In the past 24 hours, the most popular currency moved in a range of US$44K to US$47K levels.

Ether, the world’s second largest crypto, also declined nearly 5% to trade around US$3,000 mark. The coin had witnessed a strong rally last week after the Ethereum blockchain network upgraded its software with a new update, called as the London hard fork.

In a similar trend, little-known digital coin Cardano fell 5% to US$2. This coin has become the third-largest virtual currency in the world as network developers look to ride the boom in decentralised finance.