The benchmark index was tad lower today. ASX200 lost 20.40 points and traded at 6974.80, down by 0.29% on Friday's closure. The majority of sectors were under in the red today, with A-REIT being the worst-performing sector, followed by Utilities, Materials, and others. Only Health Care and Telecommunications Services managed to trade in the green zone. 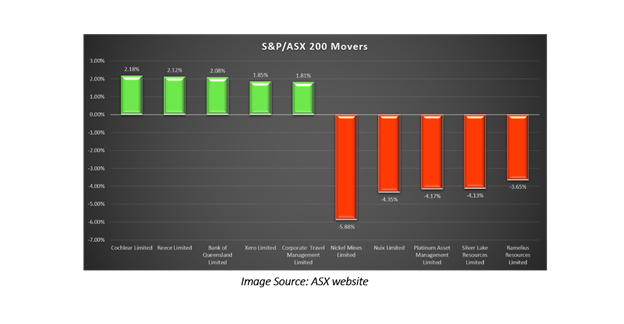 The former prime minister Malcolm Turnbull has re-emphasized the powerful role of News Corp in Australian politics. He said News Corporation is the most powerful political actor in the country as compared to the Labor Party, Liberal Party, or the National Party. He also stated that the media organisation must be held accountable, which currently is not the case.

Mr Turnbull is worried about the fact when information is designed to target a niche audience. He further added that, when he was recently named as NSW government's head of a climate advisory board, he faced a ferocious campaign from media organisations. He compared the entire situation with something similar to where a person is taken to the police station and harassed until the person fakes a confession.

Moving on, NSW Premier Gladys Berejiklian said if the vaccine rollout does not get back on track, Australia risks being left behind on this front as compared to other countries in the world. She said there is a sense of urgency as if the rest of the world will start engaging with each other after the vaccination, Australia cannot afford not to do so.

There is still no clarity on how many doses the state is going to receive. Despite the AstraZeneca vaccine side effect concerns and ongoing supply problems, NSW has a plan in place to set up mass vaccination centers in the state.

The Federal government has asked NSW state to give vaccine shots to 300,000 people comprising frontline workers and their families.

While many criticised the slower pace of the vaccine rollout, Australia's Chief Medical Officer Paul Kelly said phase 1a and 1b of vaccine rollout would be completed by mid of the current year.

Prime Minister Scott Morrison also said that he hopes that all Aussies will get the first shot by the year-end, but this is not guaranteed.

A quick look at the news highlights from other Asian markets

Alibaba CEO Daniel Zhang said that there should not be a material impact of the probe on the company.

The investors in Indian equities lost a whopping INR 6.24 trillion (US$73 billion) in the first hour of trade, on back of raging pandemic in the world’s second most populous country.

Indian benchmarks opened about 2% below their Friday’s close, triggering a massive sell-off in the shares. The selling pressure continued. The Indian market have been hammered by the rising cases of COVID in the country, as country has now become the epicentre of the global pandemic.