Australia has just stepped into corporate confession season, which coincided with recession, ongoing COVID-19 pandemic, and record stimulus with a lot of companies updating or due to update investors on their results for the financial year ended 30 June.

Let’s have a look at the latest news of the 5 ASX200 listed stocks to get acquainted with their respective performances.

On 20 August, Pacific Smiles released FY20 report for the period ended 30 June and noted a solid performance before the impact of coronavirus, but the dental services took a significant hit on its overall results in the second half of FY20.

Key financial highlights from the financial 2020 year results include of the following: 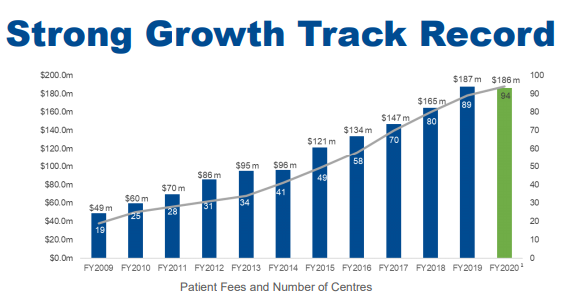 On the outlook front, for FY21, patient fees with nearly 15% growth and EBIDTA with about 15% growth YoY is expected, assuming various factors, which includes of JobKeeper benefits for Q1FY21 offsetting COVID-19 related underperformance, persistent level 3 restrictions in Melbourne in 1H FY21, trading in H2 FY21 without significant COVID-19 disruptions and opening of about 10 new dental centres.

GOOD READ: No FY21 guidance from most ASX Companies: 3 Things Investors should look at while going by luck

Utilities sector player, Infigen Energy Ltd. (ASX:IFN) share price on 20 August closed unchanged at $0.92, and has been closing flat at the same price since 12 August.

Infigen announced a 92% fall in NPAT with a loss of $37 million to stand at $3.5 million due to higher levels of depreciation, along with several pre-announced, one-off items. It also raised Renewable Energy Generation sold of 1,959GWh, rising up by 10%, with renewable sources supplying over 99% of its overall output during FY20.

Some of the key metrics from FY20 report ended 30 June includes of the following: 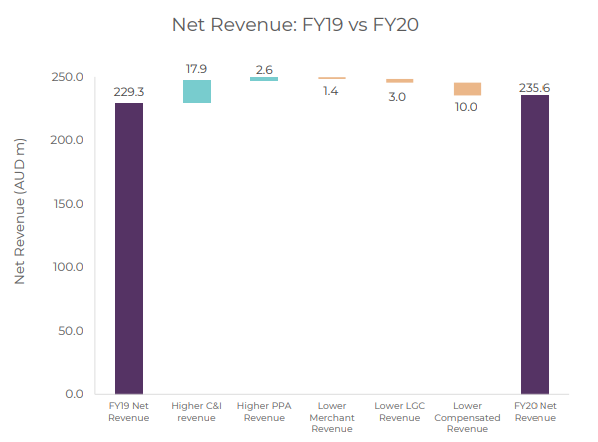 On the outlook front, Infigen expects net revenue and EBITDA to be materially lower in FY21, as indicated in its Q4FY20 activity report.

Further, as notified on 19 August, The Australia unit of Spain’s Iberdrola increased, by a week its off-market takeover offer for Infigen. The bid of $0.92 per share will stay open till 26 August.

Southern Cross reported a fall in earnings, revenue and profits for FY20 for the period ended 30 June, but the business still reported a profit excluding significant items of $34.1 million and an underlying NPAT of $35.8 million as its cost-saving initiatives and equity raising resulted in a much healthier balance sheet in FY20.

Other highlights from the full year report are as follows: 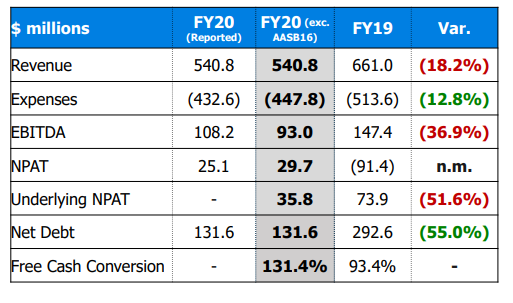 Codan announced a record statutory net profit after tax (NPAT) of $64 million for the financial year ended 30 June 2020, up by 40% on 2019’s result driven by record sales in both metal detection and communications segment which makes up of 68% and 30%, respectively. The total revenue stood at $348 million.

Codan’s business appears to be well-positioned to deliver strong performance in FY21, but the Board did not provide any update on the outlook for FY21.