A new Shot of Bonanza Gold Grades at Starlight Adds Another Feather in Musgrave’s Cap, Stock Shoots Up 7%

Notably, the impressive results came following the discovery of new White Light lode, which is 75m South of Starlight and strikes parallel to it.

Both the Starlight as well as White Light gold lodes at Break of Day are stationed at Musgrave’s flagship Cue Project, which is wholly owned by the Company and sits in the terrain of Western Australia (Murchison District).

Commenting on the recent results, Musgrave Managing Director Rob Waugh has indicated that further RC drilling is ongoing towards infilling and extending the mineralisation at Starlight, eyeing completion of a JORC resource update late in Q3 2020. Besides, diamond drilling is also being carried out in order to test depth extensions of Starlight lode below 250 vertical metres and for further defining the White Light Lode. He stated that the Company “anticipates having four drill rigs on the site by mid-August.” 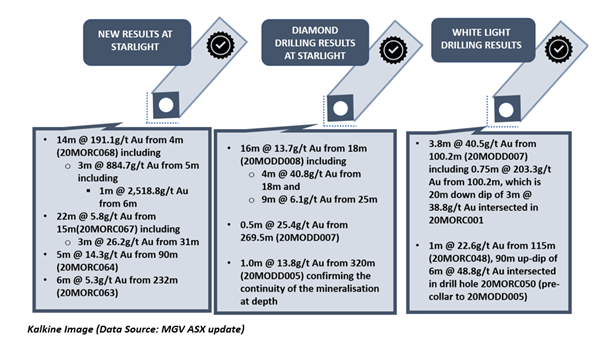 Significant new results from extensions to the Twilight and Velvet lodes at Break of Day include:

The drilling program targeted at infilling and extending the high-grade gold mineralisation is underway at the Starlight at Break of Day. Significantly, all the intersections returned from both Starlight as well as White Light lies beyond the boundaries of Break of Day’s current resource.

Notably, Break of Day’s current resource estimate, which is 868Kt @ 7.2g/t Au for 199koz contained gold does not include any results from the new Starlight and White Light gold discoveries. Musgrave plans to update Break of Day’s Resource estimate in late Q3 2020, integrating the latest results from the Starlight and White Light gold discoveries

Furthermore, drilling for testing new lodes would continue within the mineralised corridor of Break of Day or Lena, with a third drill rig due to commence on the Company 100% owned ground in mid-August.

Up until now, Musgrave has completed 58 RC holes out of the planned 70 holes, while assay results have been received for 49 holes. 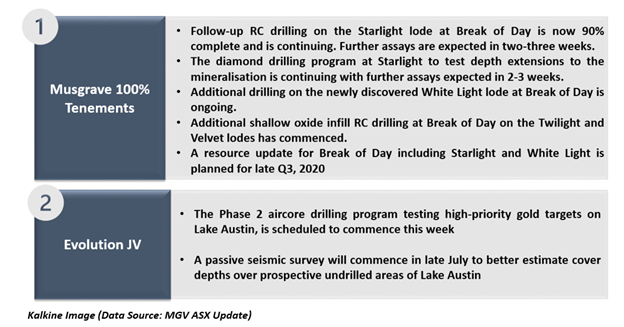