When the nation experienced shut down, and people were compelled to stay at home due to the strict regimes imposed by the government, technology played a pivotal role in ensuring there was a minimum disruption across the activities of businesses by extending multiple products and services such as cloud computing, video conferencing applications, e-learning, e-commerce and many more.

Furthermore, technology sector has been amongst the best performing sectors amid COVID-19 pandemic and numerous businesses in the technology space have been in the limelight and were preference by the market players, which in turn, aided the sector index to increase significantly on the ASX.

Did you read; Technology sector could be the best bet at the moment

Did you read; Do not miss! 5 Reasons Australian Tech Stocks would keep up with the Boom

Noteworthy, in the era of digitalisation, several companies are growing and gaining success in their businesses in terms of updated technology such as artificial intelligence and machine learning, cloud computing and are functioning uninterruptedly during this challenging time.

Did you read; A glance at Five tech-based companies tasting success amid COVID-19

In this article, we would be having a look at ASX 200 company Bigtincan Holdings Limited (ASX:BTH) from the technology sector that has outperformed and emerged better on ASX tech space with its impressive performance amid COVID-19 headwinds.

Join us and read through its latest news and take a peek at its share price on 20 August 2020.

Recently, Bigtincan presented itself in the 40th Annual Growth Conference (11 August-13 August 2020), and released a presentation on the same. It included the introduction to Bigtincan, financial progress, impact of digitisation and mobility and investment summary.

On 28 July 2020, Bigtincan unveiled its performance for the quarter ended 30 June 2020 and highlighted bolstered Annualised Recurring Revenue (ARR) of AU$35.8 million, for the period.

The substantial y-o-y increase of 53 per cent on last year and double-digit y-o-y growth of 40 per cent, with the organic ARR echoed the continuing robustness of the organic growth engine at Bigtincan.

Notably, BTH’s ARR has grown at a remarkable CAGR (compound annual growth rate) of 50 per cent over the last five years. 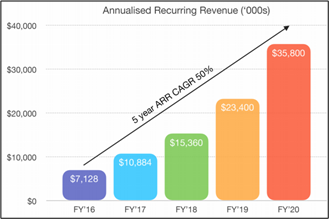 The Company witnessed a whopping increase of 89% q-o-q in customer cash receipts standing at AU$10.4 million driven by soared customer deals signed at the end of calendar year 2019 and during first six months of 2020. Also, in the quarter period, Bigtincan secured Government grants worth AU$1.5 million.

Additionally, Bigtincan’s total operating cash payments for the three months noted a considerable increment of 74 per cent y-o-y and was noted at AU$12.3 million.

Furthermore, the Company also divulged its bolstered financial position with AU$71.9 million in cash and cash equivalents, as on 30 June 2020, demonstrating the fact that the Company was well-funded to execute on its development plans.

Position boosted with the capital raising

Initially $5 million was the target set for SPP offer, but due to solid support received from eligible stakeholders, the directors of the Company exercised their discretion to grow the size of the SPP offer to around AU$7.5 million.

Bigtincan obtained more than 3,700 applications from eligible stakeholders amounting to around AU$ 16.1 million (on 19 June 2020). The SPP shares would be issued at an issue price of $0.67/SPP Share.

The proceeds of the raised capital would be utilised to-

Bigtincan had also reiterated its FY20 guidance and had advised that the Company remained on track to achieve 30-40% organic revenue growth in FY20 and anticipated stable retention.

On 2 July 2020, BTH announced that it had inked a contract worth AU$1.8 million with Red Bull GmbH for the implementation of the Bigtincan software.

The duration of the agreement is noted to be 30 months, and with a provision of an extension for another 60 months.

In the quarterly rebalance of the S&P/ASX indices unveiled on 12 June 2020, BTH was included in All Ords (ordinaries) index on 22 June 2020.

Despite the fact that overall market conditions for FY21 are uncertain, BTH is noted to be well-positioned to commence the new financial year for future growth.

Which ASX BlueChip Stocks Are Trading Higher As Earnings Continue?