While investing, an investor interacts with various class of investment, such as bonds, FD’s, shares (Equities) etc. However, when it comes to investing in equities, the small-cap companies persist with a high risk in comparison to large-cap and mid-cap.

In this article, we would be discussing about some small cap stocks and their recent updates, to reach to a conclusion- which small cap stock is gearing up in the trading session of 30th October 2019.

PPK Group Limited (ASX: PPK) is engaged with the business activities such as manufacturing, providing support and distribution of CoalTram, along with other underground diesel automobiles, alternators and so forth.

Emeco Holdings Limited (ASX: EHL) is known as the global leader in making the best use of the execution of heavy earthmoving equipment. EHL was established in 1972, with operations in all major mining areas of Australia. Its clients are from mining entities.

Notice and Agenda for 2019 AGM

The Annual General Meeting 2019 of Emeco Holdings Limited has been scheduled to be held on 14th November 2019 and there would be few business agendas as follows:

In the report for the quarter ended September 2019, the net cash outflow of the company stood at $3.484 million, settling major payments such as $5.124 million and $0.946 million for product manufacturing & operating costs and staff costs, respectively.

Steamships Trading Company Limited (ASX: SST) has its operations in the divisions of Hotels and Property, Logistics and Commercial & Investments.

Change in Date for Interim Dividend 2019

Recently, SST through a release dated 24th September 2019 announced that the date for 2019 interim dividend has been changed from 4th October 2019 to 1st November 2019 because of delays in securing foreign exchange, as a consequence of shortages in currency.

A look at Half-Yearly Results

Johns Lyng Group Limited (ASX: JLG) is into providing building and restoration services throughout the Australian region. JLG has a diversified consumer base consisting of commercial enterprises, loss adjusters and so forth.

The company would be conducting its 2019 Annual General Meeting on 21st November 2019. It would be considering and receiving its financial report for the year ended 30th June 2019 and a few resolutions such as: 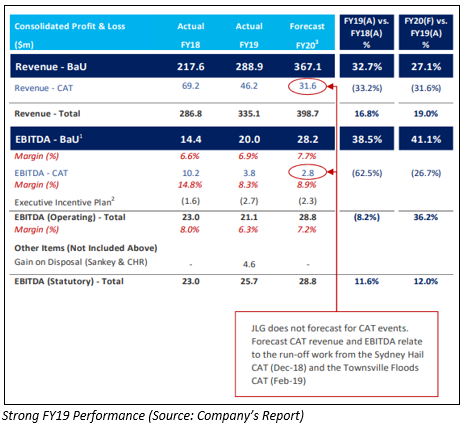