Australia is one of the worlds foremost mining hubs, and there is no denying that the mining sector forms a major contributor to the GDP around 10% of the GDP (35 % of the GDP growth in FY19). Also, it is worth mentioning that the resource sector holds 60% of the total export share of the nation. The volume of activities in the mining sector unlocks the opportunities for mining equipment providers and contractors.

In any infrastructure projects, the maximum chunk of upfront capital expenditure (capex) is consumed by the equipment procurement and construction. In the milieu of which it is quintessential to analyse the upcoming projects in Australia and for the same, the article focus is on feasible and publicly announced projects. The existing committed and completed projects must have already been into an agreement with their prospective supplier, contractor or Engineering, Procurement and Construction (EPC) companies for the development of the project.

The total tune of opportunity in the upcoming projects is massive to the value of ~A$133 billion in Australia coming from ~131 projects. These projects are expected to create immense job opportunity both at the time of construction and operations.

The number of jobs generated from the construction projects is expected to be ~48,402 headcounts and ~36,685 headcounts at the time of operation – Estimated by Department of Industry, Innovation and Science (DIIS).

Therefore, it is pertinent to evaluate the region-wise future projects to effectively map the movement of equipment from one place to another potential project, shipment route to customer and even helps in assessing the future supply and demand gap. It may also help all the related stakeholder of the projects to identify prospective business opportunities and increased logistics efficiency. 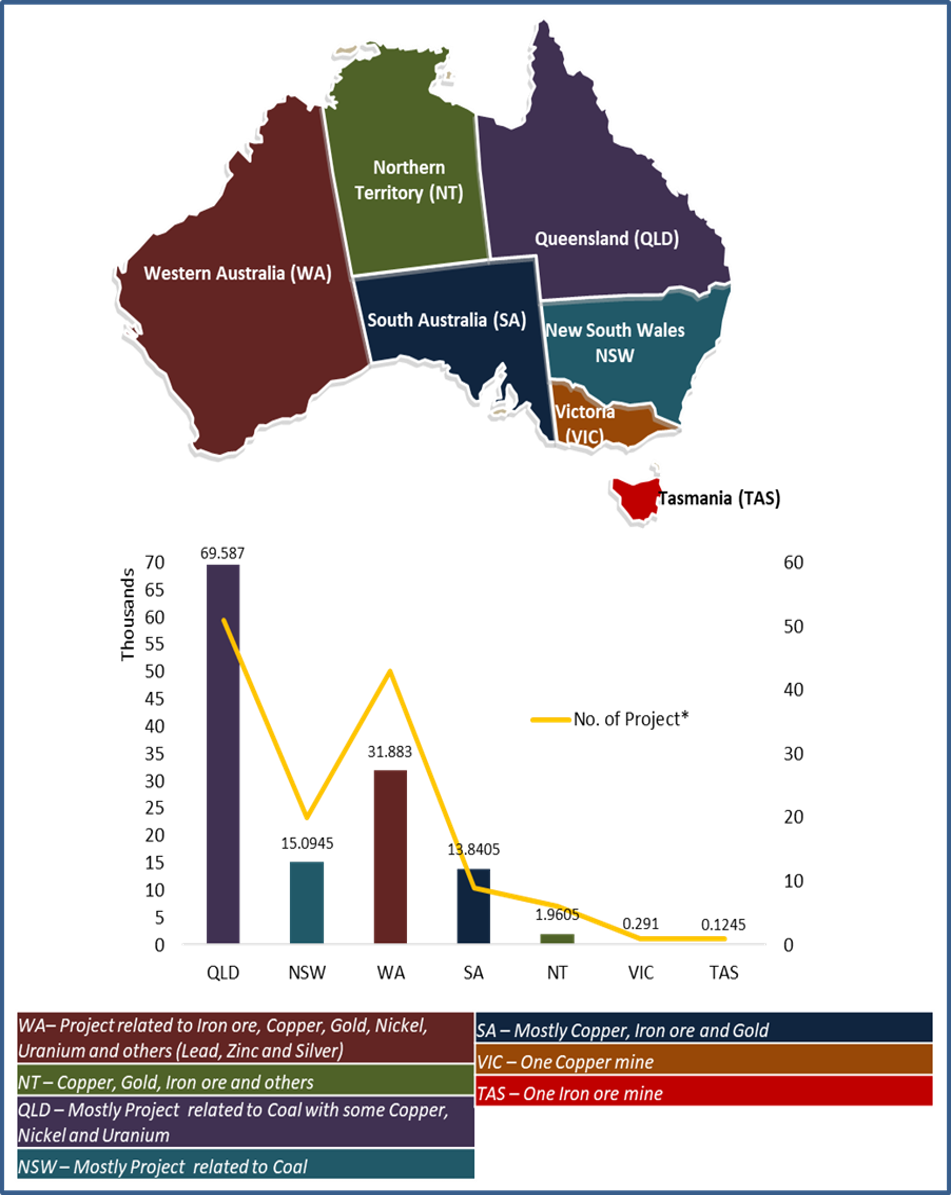 *Only Feasible and Publicly announced projects; $A billion is as per Kalkine base case scenario for the upfront capital expenditure given in the range.

Let us now gauge through forthcoming projects vis-à-vis commodity to help in the segregation of the mining equipment as per the commodity. For example, Dragline and Bucket-wheel excavator are predominantly used in coal in comparison to copper or gold. The most common mining equipment's are shovels, loaders, drill and blasting, ventilation fans, longwall machine and hauling trucks to mention a few.

Analysing commodities also helps the reagent supplier to estimate the future demand coming from which region in the country. For an example presence of gold mine may involve cyanide for leaching purpose whereas most of the precious and base metal would require common equipment related to crushing, grinding, flotation and reagent such as sulphuric acid.

Copper: The upcoming copper projects capacity is around 122kt from feasible projects and 298kt from publicly announced project with a value of ~A$1,354.5 million and ~A$5,747 million, respectively. The bulk of the capacity is anticipated to come from new assets than expansion project, majorly coming from WA, SA and others. The employment generation is expected to be ~2,970 headcounts at the time of construction and ~1,600 at the time of operations.

Coal: The upcoming coal projects capacity is around 392.53Mt from feasible projects and 63.6 Mt from publicly announced project with a value of ~A$62,227 million and ~A$13,494 million respectively. Most of the capacity is anticipated to be coming from new assets majorly from QLD region. The employment generation is expected to be ~30,967 headcounts at the time of construction and ~28,230 at the time of operations.

Iron ore: The upcoming Iron ore (Hematite and Magnetite) projects with a capacity of around 194.1Mt is expected to come from feasible projects and ~137.5Mt from publicly announced project with a value of ~A$20,821 million and ~A$16,618.5 million respectively. Almost all the projects are new, with a major bulk of it coming from WA followed by SA, NSW, NT and TAS. The employment generation is expected to be ~10,850 headcounts at the time of construction and ~4,390 at the time of operations.

Nickel: Nickel projects worth ~64.8kt capacity are expected to come from feasible projects with total capex of ~A$1,418.5 million and ~98.6kt from publicly announced project with total capex of A$3,997.5 million. Future production is anticipated to be coming from new assets, mostly located in WA, followed by QLD and NSW. The upcoming projects are likely to produce cobalt and to some extent copper.

Interesting Read: How Is the Nickel Landscape Shaping Up

Uranium: The upcoming Uranium projects are new assets located mostly in WA and QLD. Where ~23.75kt of capacity is expected to be from feasible projects with total capex of A$2,408 million and mere 2.7kt from publicly announced project with total capex A$749.5 million, the resources in the country are mostly Triuranium octoxide (U3O8) and only 13kt of Uranium.

Other Base Metal: The remaining Lead, Zinc and Silver projects worth capex of ~A$622.5 million are expected to come from WA followed by NSW and NT.

Summarizing the upcoming projects in the table: - 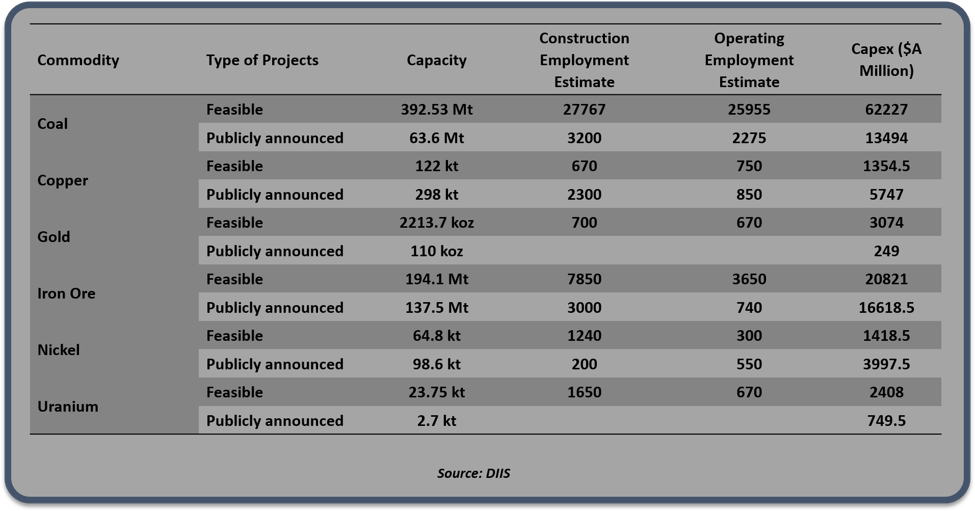 The upcoming projects pose excellent opportunity in future to all the stakeholders of the mining projects ranging from exploration stage to the operational stage. And even after commercialisation, the assets hold the prospect for subcontracting. Having said that all the above-cited opportunities are subjected to various macro-economic factor as well as to the feasibility study for publicly announced projects.

Must read Article on: Miners as looked through three stocks: RIO, OZL and S32