Annual General Meeting is a mandatory gathering of a companyâs shareholders in most of the jurisdictions. If interested, the shareholders can attend the meeting to gain insights from the management related to the companyâs performance and strategy.

The companies usually schedule AGMs on a yearly basis and present their achievement for the past period. At the AGMs, the eligible shareholders vote on the resolutions put forward by the management.

Further, the resolutions may include dividends, appointment of directors, compensation of executives, corporate restructuring plans, etc. It provides opportunities for the shareholders to ask questions or express concerns related to the company.

In October 2019, the gambling and other entertainment services provider had reported on the appointment of Mr David Gallop AM to its Board as a Non-Executive Director, dependent on regulatory and ministerial approvals. Mr Gallop is a well-known figure in the sports industry with senior positions at the National Rugby League and Football Federation Australia.

It is expected that the company would announce more additions to the Board in FY20 to complement its Board with necessary skills and experience.

In September 2019, the company had notified that the 2019 Annual General Meeting (AGM) is scheduled on 24 October 2019 in Sydney, NSW. Besides, the company also reported that investigation in the Cambodian matter from 2009-10 was closed by the Australian Federal Police.

In the year-ended 30 June 2019, the company reported strong growth in revenue and profit, and declared fully franked dividends worth 22 cents per share for the whole year. Due to multiple transactions including closure of Sun Bets business in the UK and acquisition of Tatts Group, the results from the prior year were restated to reflect Sun Bets as a discontinued operation. 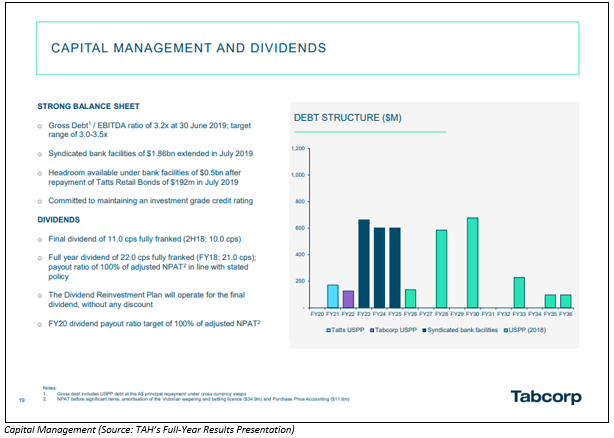 In FY2019, the company reported NPAT of $362.5 million, up from $28.7 million in the previous year (including discontinued operations). Reported revenues from continuing operations were $5.48 billion for the period.

Recently, the air transportation services provider had notified on the level of foreign relevant interest in QAN. As of 3 September 2019, foreign investors potentially held the relevant interest of 35.78% in the issued share capital of the company. Therefore, the company is in a position to qualify for the recognition in the MSCI Global Investable Market Indexes.

In late August 2019, the company had reported convening its 2019 Annual General Meeting on 25 October 2019 in Adelaide, South Australia.

In the year-ended 30 June 2019, the company adopted AASB 15 Revenue from Contracts with Customers from 1 July 2018, and the results for the previous year were restated to reflect the change for comparison.

During the year, the company generated statutory profit before tax of $1.27 billion, down $87 million compared to the previous year. The fuel costs soared higher by $614 million compared to the previous year. Its international business is more prone to the fuel headwinds with relatively more competition, resulting in a slow recovery from fuel costs headwinds.

However, the fundamentals of the international business were strong, increasing revenue propelled strong earnings. The company also returned to double-digit profit growth in the second half compared to the prior corresponding period. 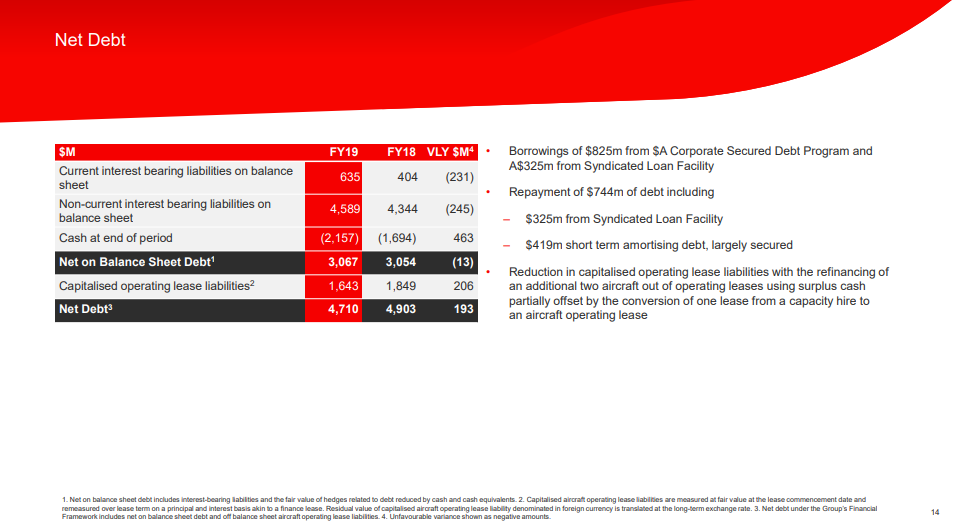 According to its Annual Report, the companyâs net debt at the year-end was $4.7 billion that was below the lower end of the net debt target range of $5.2 billion to $6.5 billion. It generated $2.8 billion in operating cash flow, lower compared to the previous year due to lower working capital benefits and timing of option premium outflows.

Recently, the international casino and gaming entity had reported on the tax dispute with the Australian Taxation Office (ATO) before the Federal Court and the Administrative Appeals Tribunal. The tax dispute is related to the taxability of the companyâs financing for investment in Cannery Casino Resorts in North America for the financial years ended 30 June 2009 to 30 June 2016.

Further, the company and tax office had reached an agreement to settle the dispute and issues related to financial years ended 30 June 2015 to 30 June 2018. The terms of the agreement are confidential, and the settlement is not material to the companyâs current and future financial results.

In September 2019, the company had notified that the Annual General Meeting is scheduled on 24 October 2019 in Victoria.

Recently, the online automotive advertising services provider has announced that its Chief Financial Officer â Mr Andrew Demery has resigned after spending five years with the company. He had overseen numerous favourable changes to the business, and the most recent project was the implementation of a new global ERP and Salesforce platform.

Further, the company has confirmed that Mr William Elliot would be working as Acting CFO while the company conducts a search for a replacement. Mr Elliot is the current CFO of International & Head of Commercial Finance.

In September 2019, the company announced that the Annual General Meeting of Shareholders is scheduled to be held on 25 October 2019 in Melbourne.

In the year-ended 30 June 2019, the company achieved growth in the business amid challenging economic conditions on consumer sentiments. The domestic conditions in the period were unfavourable with new vehicle sales adversely impacted by economic uncertainty, tightening credit availability and falling property values. 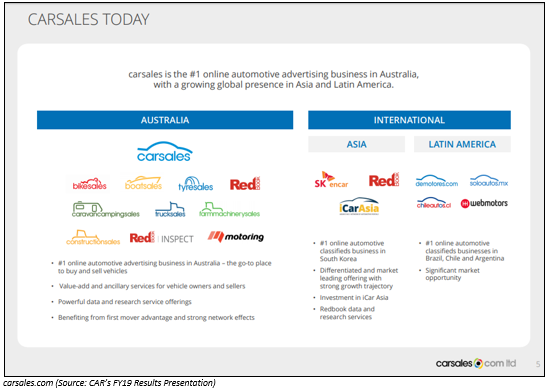 However, the company delivered growth amid unfavourable conditions in the domestic market due to diverse revenue streams, new products and entry into new markets. The industry-wide headwinds included changes to lending regulations for dealers, challenges in sourcing new car stock from Europe, and reduced spending on advertisements by carmakers.

In September 2019, the home consumer products retailer notified that the Annual General Meeting is scheduled to be held on 24 October 2019 in Victoria.

The company also released its 2019 Annual Report for the period ended 30 June 2019. In the Chairmanâs and Group Chief Executive Officerâs Report, it was stated that FY2019 was a strong year for the company with record sales, profits and dividends, all reporting increase over the previous year.

Tags:
crown resorts limited tabcorp holdings limited ASX: QAN ASX: JBH ASX: CWN ASX: TAH ASX: CAR JB Hi-Fi Limited Qantas Airways Limited carsales.com Limited Annual General Meeting (AGM) growth in revenue
All pictures are copyright to their respective owner(s).Kalkinemedia.com does not claim ownership of any of the pictures displayed on this website unless stated otherwise. Some of the images used on this website are taken from the web and are believed to be in public domain. We have used reasonable efforts to accredit the source (public domain/CC0 status) to where it was found and indicated it below the image.