The below-mentioned stocks have witnessed improvement in their share price during todayâs trading session. Further, these stock have made significant operational progress in the recent past. Letâs take a look at these stocks.

Today (18 October 2019), this financial services giant provided an update in relation to proceedings brought by APRA against two of IOOFâs APRA regulated entities and certain directors and executives, wherein, the company has advised that the deadline for APRA to lodge an appeal was due to lapse today and APRA has announced that it will not appeal the matter.

Recently, the company welcomed the receipt of the No Objection Notices from both OnePath Custodians Pty Limited (OPC) and Australia and New Zealand Banking Group Limited regarding the transfer of the ANZ Wealth Pension and Investments business, reflecting both ANZ and IOOFâs commitment to completing the transaction.

In addition to this, both ANZ and IOOF have also agreed on the following changes to the terms of the ANZ P&I acquisition:

Listed in the year 2013, Steadfast Group Limited (ASX: SDF) has successfully established itself as a leading general insurance broker in Australia. On 17 October 2019, the company held its 2019 Annual General Meeting (AGM), wherein it carried six resolutions.

While addressing the shareholders at the AGM, the companyâs chairman highlighted strong revenue and profit growth achieved by the company in FY19. The chairman also highlighted:

Prompted by the strong performance of the company, the Board had decided to pay fully franked total FY19 dividends of 8.5 cents per share for the year, up by 13% on last year.

During FY19, the company made a total investment of $136 million in earnings per share accretive businesses, including seven new acquisitions and 12 increases in its equity holdings in Steadfast Network brokerages and underwriting agencies. The company recently announced the successful completion of the IBNA transaction which added 79 brokers to the Steadfast Network and which will be accretive to the companyâs profit.

During FY19, Steadfast Networkâs gross written premium (GWP) increased to $6.1 billion, which is 16% higher than FY19. Steadfast Group highlighted largest general insurance broker network in Australasia with 398 brokers prior to the completion of IBNA acquisition. 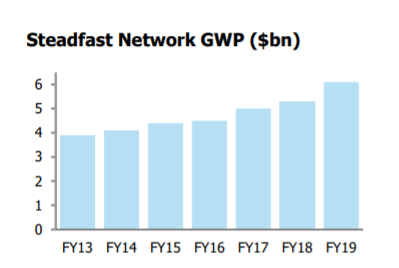 The company already has a strong sales pipeline across its key markets and across its geographic regions, and in addition to this its strong market credentials is driving a pipeline of contracted work from existing clients.

In FY19, the company delivered outstanding results across all key metrics, driven by robust demand across the Bravura product suite and operating leverage expansion.

In FY19, the Wealth Management segment achieved healthy growth, with revenue increasing by 14% and EBITDA by 17%, primarily due to the companyâs flagship offering, Sonata. During FY19, the company delivered complex implementation projects for new Sonata clients across key geographic markets, as well as met strong demand among the companyâs existing global client base for additional functionality.