The Present And Future Of The Major Australian Banks

It has been always rightly emphasised about the robust stance of banks and financial institutions in Australia. In the article on the share market evolution in the past century, we stated that banks constitute to be a vital element of the Australian economy and have been one of the most important sectors.

However, the recent global economic turmoil has had an adverse impact on world economies and the banking sector for a variety of reasons, be it the non-settling US-China trade war, unemployment surge, interest rate cut and property plummet. Amid these micro and macro-economic factors hovering over the business world, let us understand the present positioning of the banks and financial institutions in Australia, and analyse if these sturdy stocks are worth investing in.

The banks in Australia offer a wide range of financial services to the individuals and businesses and have a vital role to play in the financial system and overall economy. The banking system in Australia is very reliable, sophisticated, competitive and is of a transparent nature. It possesses a strong regulatory system.

In the Australian region, the first bank to be established, was in Sydney, way back in 1817, namely Bank of New South Wales. Presently, the Australian Banking sector is still evolving and continues to provide a basket of financial services, with the inclusion of foreign banks and heightened technology amid deregulation and privatisation.

However, the pivotal bank, guardian and watchdog of the country is the Reserve Bank of Australia, which decides the monetary policy and regulates the payment system. It is supported by the Australian Prudential Regulation Authority (APRA) who carefully watches the banks, credit unions, building societies, insurance and superannuation companies. The Australian banks can be categorised in the following four categories: 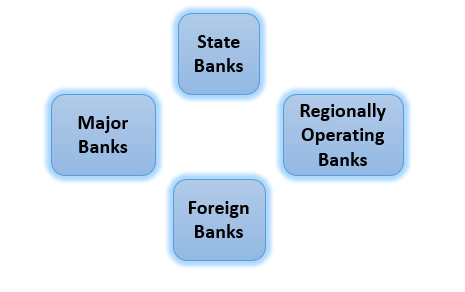 In the first half of 2019, the Australian major banks faced challenging conditions from the slow lending growth, margin compression and a softer domestic economy growth. They encountered the scrutiny of the Royal Commission era and had a tough game rebuilding trust with customers post the Royal Commission’s orders and adherence, which caused some short-term volatility. As a result of these challenges, the major banks reported a continued decline in aggregate cash profits in 1H19 and continued to allocate a greater proportion of their spending towards risk and compliance, which formed almost half of the total investment expenditure cost.

Coming to the much-discussed topic of property this season, the housing credit was up by 1.5% and the non-housing credit depicted a reasonable upliftment of 1.3%. The average cost-to-income ratio was up by 47 basis points to 46.1%.

A topic that cannot be ignored while discussing a bank’s or financial institution’s performance is debt. In 1H19, these banks reported an aggregate charge for bad and doubtful debts of $1.8 billion, down by $23 million on a statutory basis. However, the capital position underwent a growth trajectory, and was up by 25 basis points, though the ROE decreased by 88 basis points on pcp. 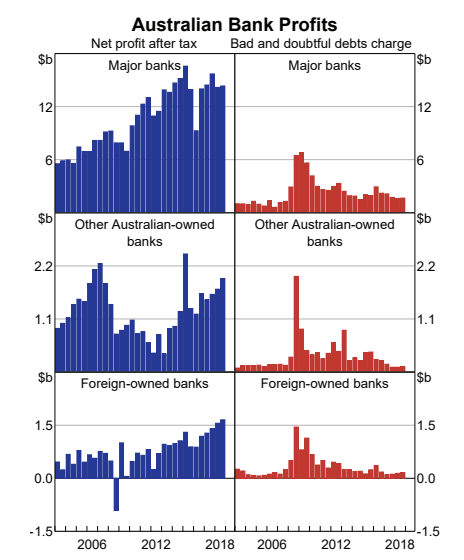 It can be rightly concluded that the decline in housing demand, tightening of the credit standards and increase in competition from the non-banking sector, have adversely affected the revenue performance of these banks.

Recent with the Banking Sector in Australia

On a lighter note, ANZ was accoladed as the Best Major Bank in the Mozo Experts Choice Award, as it offered lower fees and competitive rates across the widest range of personal banking products and was in the good books of customers via its credit card and home loan options.

Adding to the bright outlook, industry experts are cautiously optimistic with the stable performance of the auction clearance rates, that have modestly edged up in the capital cities of the country. Moreover, healthy competition is on the rise with the recent presence of neobanks (digital banks with no physical presence) in Australia- Xinja and 86 400.

What’s in store for the Australian Major Banks?

Industry experts suggest that the near future of Australia might face a tighter serviceability assessment, subdued economic growth, slowing housing market and a haywire housing credit growth. The sensitivity of this situation and fixing the same is the need of the hour, and for the same reason, interventions from the RBA and APRA are likely to take place. The competition is expected to increase from both traditional ADIs and non-bank lenders, which would eventually put pressure on interest margins.

Australia is expected to face further low interest rate environment, after the RBA shunned down the rates historically and consecutively in June this year. The challenges in the revenue growth and expenses would make it difficult for the four banks to maintain the level of ROE and dividends. Moreover, divestment of non-core businesses is on the cards.

However, Australia has a robust governance and potential to combat economic challenges, given the support of the government, regulatory authorities and increase in investor traction in the country. This can aid the banks and financial institutions in the country to become more efficient and rebuild trust amid rising competition.

How did the Major Four perform on the ASX?

Let’s look at the performance of the four major banks, by the closure of the trading session on the ASX (as on 11 September 2019):

The above performance is an indication that amid the challenging micro and macro-economic adversities, the major banks have maintained the investors sentiment on a modest but positive note. It would be interesting to analyse if the anticipated positive outlook is able to outweigh the pessimism projected in the sector by some experts.