Overview of the Australian Telecom Sector

The telecommunication sector comprises of the companies that enable global communication through either Internet or Phone, wires or wirelessly, airwaves or cables. The telecom sector has developed from the telegraph to the digital and wireless technology used in the present.

The Australian telecommunication market is driven by Mobile broadband and Fibre-to-the-Node (FttN) market. The mobile broadband market is growing steadily in Australia with a decline in fixed-line telephony traffic and revenue. As the fibre and fixed-wireless broadband services are becoming more widely available, the fixed-line DSL broadband is declining.

The Communications Report for 2017-18 presented by the Australian Communications and Media Authority (ACMA) showed that Australia's telecom industry generated a revenue of $44 billion in the last financial year. The report also demonstrated a growth of 15 per cent from the wireless telecommunications between 2014 and 2018.

Let us have a look at some of these telecom service providers trading on the Australian Securities Exchange:

During the period ended 31 December 2018, the company renamed its operating segments as follows:

The company informed that the ASC (Australia Singapore Cable) submarine cable between Perth, Singapore and Indonesia was successfully launched in 1HFY19. During the half-year ended 31st December 2018, capex payments of AUD 133.0 million were made in relation to the ASC. The company has estimated the final capex payments in relation to the ASC project at AUD 8.4 million that is to be made in the second half of FY19.

In H1 FY19, the company’s Statutory Revenue improved slightly by 0.7 per cent to $974.2 million from $967.3 million in H1 FY18. However, its Underlying EBITDA fell 9.8 per cent to $170.7 million in H1FY19 compared to the prior corresponding period (pcp). The company reported a Net Profit after Tax of $16.5 million during the half-year period.

The table below incorporates the divisional performance of the company in H1 FY19 relative to H1 FY18:

The company aims to maximise profitable growth within its core Enterprise, Government & Wholesale markets in New Zealand and Australia, utilising its fibre and network assets. The company’s goal is to double its revenue from these Australian and New Zealand markets within five years.

One of the leading telecommunications and technology companies headquartered in Australia, Telstra Corporation Limited (ASX: TLS) provides a wide range of services worldwide. The company has been committed to the Asia Pacific region for a long time. It has one of the largest subsea cable networks in the region, delivering access to 400,000 kilometres of cable. The networks of the company are connected to nearly 60 data centres, with the largest integrated data centre footprint in the Asia-Pacific region.

The company announced on 29th May 2019 that it expects increased restructuring costs and non-cash impairment of legacy IT assets in FY19 due to good progress on its T22 strategy. The company also anticipates a reduction of around 6000 roles by the end of the financial year.

Telstra published its financial results for the half-year ending December 31, 2018 on 14th February 2019. The company’s financial results were in accordance with its guidance with its total income, EBITDA and NPAT down by 4.1 per cent, 16.4 per cent and 27.4 per cent, respectively on a reporting basis. The results reflected the significant and progressive impact of the NBN roll-out. 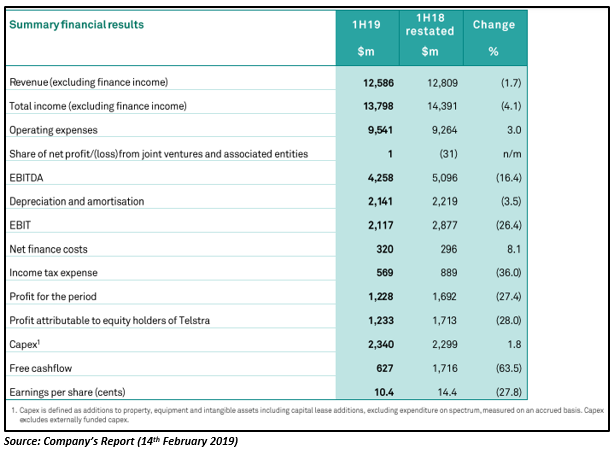 The underlying fixed costs of the company declined 4.2 per cent in 1H19, with around $900 million achieved in cost reductions since FY16.

A global communications partner, Speedcast International Limited (ASX: SDA) has an extensive multi-technology terrestrial and offshore network. The company offers telecommunications managed services and IT solutions to governments and enterprises and has more satellite capacity than any other service provider.

The company published its Annual Report 2018 on 18th April 2019, in which it mentioned that it has further strengthened its position as the world’s leading remote communications services provider in 2018. The company has around 1,500 employees in more than 40 countries, serving around 3,200 customers in 140 countries.

In December 2018, the company completed the acquisition of Globecomm Systems Inc. for a cash consideration of $134 million. The acquisition supported doubling Speedcast’s revenue in the Government sector and bringing both significant cost and revenue synergy opportunities. The company also signed two largest contracts in 2018, with Carnival Corporation in the U.S and NBN Co in Australia.

The company’s financial performance was weaker than expected despite several achievements in 2018. The revenue of the company improved 21 per cent in the year ending 31 December 2018 to USD623.1 million. However, the ‘Profit for the year after tax attributable to the owners of the Company’ declined 69 per cent to USD1.9 million. 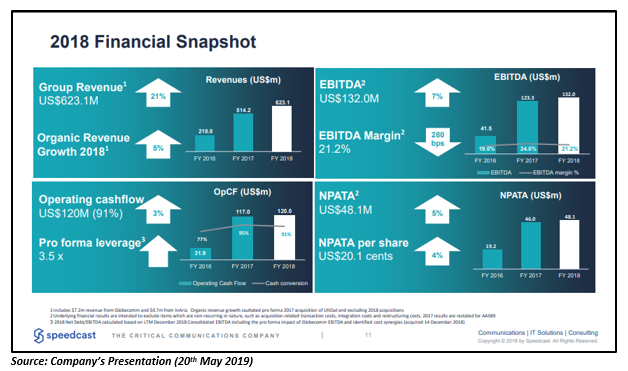