Normally when a company has surplus cash, it has four choices as to what to do with the extra cash: The company can pay extra cash to its shareholders in form of dividend, can invest in other existing businesses or incur capital expenditure, can buy another business unit or can repurchase its shares back from shareholders in the form of share buyback.

A share buyback is a way to return capital to shareholders, which requires the shareholders to give up the stock of the company in order to receive cash. Those shares are taken off the market and pulled out of circulation.

Many fund managers think that companies returning surplus funds to shareholders is a good thing in the absence of exciting opportunities. It can be through paying dividends or buying back their own shares.

Buybacks are critiqued overseas as they are considered to artificially increase the EPS of a company by reducing the outstanding shares and increasing the profit per share. Long term investors generally prefer higher dividends than buybacks as they must stay invested. That said, a buyback is intended to result in a technically more profitable, and valuable, company.

Let’s look at some examples of share buybacks in Australian market.

Aurizon Holdings Limited is an integrated rail transporter of coal from mine to port for export markets and a heavy haul freight railway operator. Earlier in August 2019, the company announced share buyback of up to $300 million to reward investors, despite a 13 per cent decline in its statutory net profit for FY2019, to $473 million. 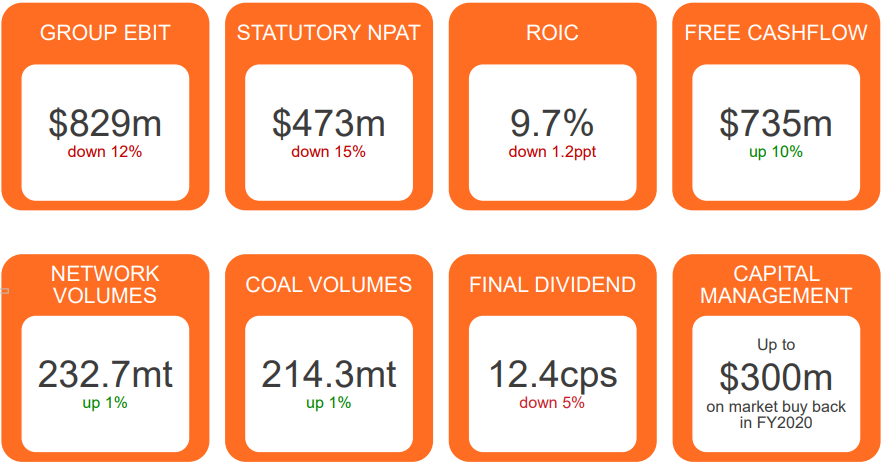 The company gave solid performance for the year with good growth in various areas. Net sales saw an increase of 5.5% and adjusted net income increased by 9% - both in constant currency terms and on YoY basis due to marked improvements in working capital

AGL Energy Limited operates Australia’s largest dual fuel and retail energy customer base, which comprises of a considerable portfolio of wholesale energy assets and contracts to support its retail customer base.

Qantas Airways Limited is engaged in the business of international and domestic air transportation services, the sale of worldwide and domestic holiday tours and associated support activities.

The company reported underlying profit before tax of $1.3 billion for FY19, which was lower than the record result the company achieved in 2018, due to headwinds it faced during the year. Due to higher oil prices, the company’s fuel bill rose more than $600 million, and the company also had a $154 million hit from lower Australian dollar on non-fuel expenses.

In FY19, the company returned $1 billion through dividends and buy-backs and in the month of August 2019, it announced a fully franked ordinary dividend of 13 cents. The company announced a $400 million off-market buy-back of up to 80 million shares.

The key outcomes of the buyback are given in the table below: