Property stocks with double-digit growth in the last 12 months

The year 2019 witnessed a revival in Australia’s property market, backed by improved lending conditions and lower interest rates. The reduced interest rate and its sustainability will help create a positive outlook and lead to a further rise in property prices in 2020.

According to a recent announcement, ABS reported a growth of 4.4% in the new loan commitment value for housing in December 2019.

As per the World Bank’s ‘Doing Business Report 2020’ ranking 190 economies around the globe, Australia is ranked 11th on the parameter for ‘Dealing with Construction Permits’. Also, in the parameter ‘Registering Property’, Australia is ranked 42nd. These parameters consider the number of procedures, cost and time to transfer a property and to complete all formalities to build a warehouse. Moreover, it considers safety mechanisms and the quality control in the construction permitting system and land administration system.

Let’s have a look at three property stocks: LLC, HPI and CQR; their businesses, announcements and the change in stock price observed based on various important updates. 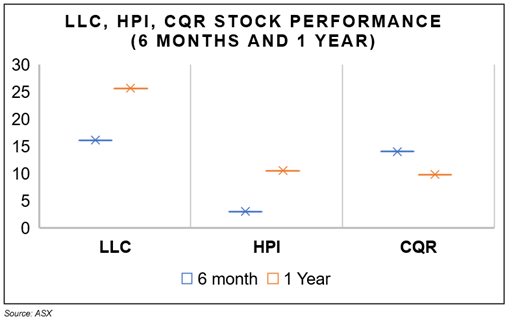 An ASX-listed company, Lendlease Group, is into the business of construction, investments and development for building places to live, work, enjoy and connect. The company has delivered several projects of cultural, public and social significance, including National September 11 Memorial & Museum, Sydney Opera House, renovation of National Theatre and London’s Tate Britain.

LLC was incorporated in Sydney in 1958, and it operates in four regions, namely the Americas, Asia, Australia and Europe.

For the six-month ended 31 December 2019, Lendlease declared a dividend distribution of 30 cents per share which is not franked. The record date is 28 February 2020, followed by the payment date, 17 March 2020.

LLC to Divest its Engineering Business for $180 million:

On 19 December 2019, LLC notified the market that it had signed an agreement with Acciona Infrastructure Asia Pacific to sell its engineering business for $180 million. The deal was a key milestone for the company, which is focusing on achieving its target of delivering more than $100 billion global development pipeline. Subject to the regulatory approvals and consents from third party and client, the transaction is expected to close in the first half of CY2020.

The ASX-listed Hotel Property Investments maintains a portfolio of freehold properties including hotels and associated specialty tenancies, spread across South Australia and Queensland.

Other key highlights include: 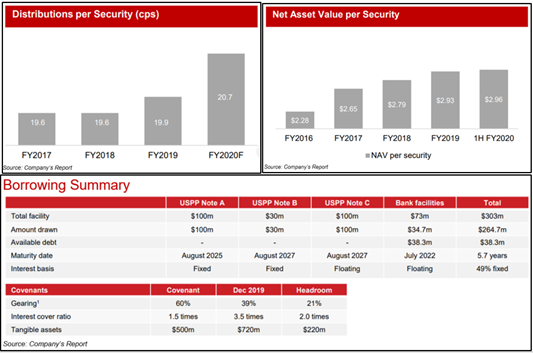 The stock had delivered positive returns of 0.29% and 10.19% in the last six months and one year, respectively.

Interesting Read: Best of the Yields - Australia's REITs under Spotlight

The increased stake of CQR in BP Partnership Fund:

On 20 February 2020, Charter Hall Group (ASX: CHC) notified the market that it had sold its 17.5% stake in the BP Partnership to Charter Hall Retail REIT for around $77 million.

Also, the company would undertake a fully underwritten institutional placement to raise $90 million at an issue price of $4.81 per unit. This placement will be used to fund the BP Partnership acquisition.

The company wished to halt the trading of its stock, either until announcement issued to the market or beginning of normal trading on 24 February 2020, whichever is earlier.

The company came out with its first half FY2020 results for the period ended 31 December 2019.

The stock of the company had generated positive returns of 16.12% and 25.67% in the period of 6 months and one-year, respectively.