Pharmaceutical giant with one of the largest and fastest-growing protein-based biotechnology business, CSL Limited (ASX: CSL) continued to be the market darling throughout the year with its share price reaching its all-time high of $262.0 on 4 November 2019. In the last 30 days, the CSL shares gave return of 8.83% adding to what has been an outstanding year for CSL shares. This monthly upsurge in stocks could be attributable to increasing demand for immunoglobulin resulting in a shortage of supply, as reported by US FDA earlier in August 2019.

An outstanding year for the CSL is reflected from its share price graph which showed a steady and gradually increasing upward trend underpinned by the robust financial performance, with a strong upsurge in revenue by 11% for FY2019 and on a constant currency basis, the revenue increased by 17%. CSL reported $1,919 million net profit after tax and US$1.85 total full-year dividend per share.

The company recorded interim unfranked dividend was valued at US$0.85/share and a final dividend unfranked of value US$1.00/share. Together they comprised of the total ordinary dividends of US$1.85/share, with US$4.24 earnings per share.

Also, an amount of US$832 million had been invested in R&D activities, of which 57% dedicated to novel product development, 13% for market development and 30% for lifecycle management. Total operating revenue of US$8,539 million and a Net Profit of US$1.9 billion has been reported for FY2019.

CSL is involved in developing, marketing and delivering novel biotherapies as well as influenza vaccines via its two prime businesses CSL Behring and Seqirus.

CSL Behring Portfolio delivered a significant market growth reflected by a 16% hike in sales. It was notified to the market that CSL’s novel CDIP (Chronic Inflammatory Demyelinating Polyneuropathy) indication for HIZENTRA® and the inclusion of this CDIP indication for PRIVIGEN® played a remarkable role in driving CSL’s growth with –

Furthermore, the augmented demand of immunoglobulin was driven by increased use of chronic therapies, improved awareness as well diagnosis of chronic diseases, CIDP indication as mentioned above & growing usage for SID. Likewise, there is a rising demand of patients for HAEGARDA® and KCENTRA®, which are CSL’s speciality products. Also, encouraging advancements in CSL’s Haemophilia portfolio contributed to its stupendous financial performance.

It was reported that the total sales of this portfolio were up by 19%, and revenues were reported to be increased by 12%. The company is undergoing a transition in its portfolio into distinguished products.

CSL is looking forward to expanding the market for FLUCELVAX® by –

CSL released notice regarding the change of its directors’ interest on 25 October 2019. It was informed that Mr Paul Perreault, Mr Robert Andrew Cuthbertson and Mr Shah Abbas Hussain changed their relevant interest in securities as per the section 205G of the Corporations Act. The details are given below. 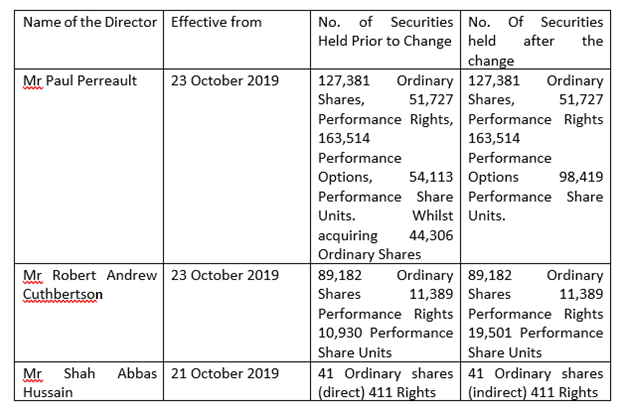