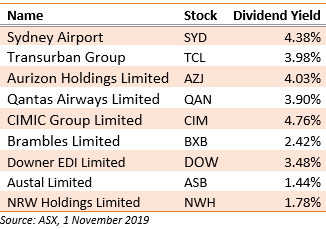 However, some of the broader markets players in the industrial space have the annual dividend yields above 5 per cent as well, and these stocks include:

Industrial sector players may be up for some optimistic times in the near-term. As tackling slow economic growth could be a daunting task and, slow moving economies must also realise that only monetary-side policy measures might not be able to uplift economic growth completely. Such low rates globally only increase the monetary supply, which could be fruitful if the borrower quality remains strong in order to access credit at reasonable yields.

In this context, let us delve deeper into 2 industrial stocks-ASX: TCL, ASX: AZJ

Recently, the group completed the acquisition of the remaining minority interest in M5 West, following the nod from Roads and Maritime Services and M5 West financiers. The company had notified about the acquisition in the full-year results in August 2019.

In October, the group convened its 2019 Annual General Meeting. In its Chairman Address, it was mentioned that this year marked the 20th anniversary of the opening of CityLink which was responsible for connecting Melbourne.

Mr Lindsay Maxsted said the Federal Governments and private sector had invested record amounts into roads and public transport infrastructure development to meet the demand. Presently, it is estimated that $130 billion worth of infrastructure projects are under construction in Australia.

Infrastructure Australia has found in its modelling that the cost of road and public transport congestion is $19 billion that could reach double figures by 2031 to nearly $40 billion in the absence of any pre-emptive measures.

He stated that the Australian economy is not moving towards a recession, and an even greater infrastructure investment to stimulate growth could be needed to tackle the present sluggish state of the economy.

The group would support RBA Governor’ call for a major investment program in new infrastructure projects and maintenance of existing infrastructure to generate growth.

He also acknowledged some softness in the September quarterly traffic numbers, which depicted that growth in the group’s domestic assets is slightly behind compared to recent years.

In the present scenario, the group would be actively investing billions of dollars in the cities where it has a presence. Over the past decade, the group, along with its partners, had invested over $31 billion into construction projects in the Australian market. These investments were responsible for generating over 24k construction jobs as well as tens of thousands of indirect jobs, and the wider economic benefits are reinforced by more efficient transport networks.

Presently, the group is working on four major projects in Australia for a value of over $17 billion, which would employ over 20k people. In addition, these projects are expected to open in the next four years, contributing to the productivity and liveability of our major cities.

In the September quarter, the Average Daily Traffic (ADT) increased by 1.8 per cent with growth cross all markets. The three major projects that were completed in the twelve months to August 2019 in Queensland generated additional one million trips.

Further, the development pipeline across the group’s project continues to progress, and three additional projects remains on track to open by the end of 2020.

Recently, the company has announced that Dr Sarah Ryan and Mr Lyell Stramb would be taking up Non-Executive Director roles with effect from 1 December 2019. Dr Ryan comes from the oil and gas industry background, while Mr Stramb is the CEO of Melbourne Airport.

In October, the company convened its 2019 Annual General Meeting. Mr Tim Poole – Chairman of the company, has said that the company’s bulk business has been working to progress with the turnaround plan, and a number of new contracts were started this year.

It was said that the company’s vision is to become first choice bulk commodity transporter, and in this regard, the company is progressing with Optimise, Excel and Extend strategy.

The company worked on a 10-year agreement with its network customers for an alternative access undertaking for the Central Queensland Coal Network. It is believed that the agreement has the firepower to deliver on the long overdue regulatory reforms, improving the performance of QLD’s coal supply chain.

Further, the Queensland Competition Authority considers it appropriate to access undertaking with some minor amendments. The company positively expects that the amended undertaking would be formally approved by QCA before the end of the calendar year.

He also said that the company is committed to supporting its customers as a part of the supply chain for Australia’s second-largest export industry. The high-quality domestic coal would underpin the steel-intensive growth of new infrastructure in Asia and the Indian sub-continent.

It was also said that Australia’s high-energy lower-emission thermal coal would power these nations over the medium-term amid the transition to renewables and clean energy sources from the existing fuel.

In October, the company also released quarterly above rail volumes. Accordingly, the total above rail volumes was 1 per cent higher compared to the previous corresponding period, with an increase in coal and bulk volumes.

The company has reiterated that coal volume guidance for FY2020 remains at 220 to 230 mt. In coal, the September quarter volumes were 1 per cent higher over the previous corresponding period at 52.8 mt, up by 0.6mt due to higher NSW volumes.

In Bulk (iron ore, bulk east & bulk west operations), the September quarter volumes were 1 per cent higher over the previous corresponding period at 11.6 mt, up 0.1 mt due to strong demand in Bulk West, partially offset by lower iron ore volumes.

Although, the Bulk volumes excluding iron ore were 4 per cent higher than previous corresponding period due to higher bauxite and alumina volumes, and commencement of Glencore freighter.