Lens through Large Cap and Midcaps Quarterly Updates for the week

In this article, we are discussing a few mining stocks that have reported their respective business updates for the December quarter. Due to the volatility in the commodities price, there has been a mixed effect on the realisation of prices of minerals during the last quarter as compared to the previous quarter.

Let’s go through the recent operating highlights of these companies.

Alumina Limited operates in the mining and refining activities of minerals like bauxite and aluminum. The company also operates in the alumina-based chemicals through joint ventures.

Q4 FY19 Operational Highlights for the Period ended 31 December 2019:  AWC declared its quarterly results wherein the company reported adjusted EBITDA from Alcoa Alumina Segment at $133 million as compared to $223 million in Q3 FY19. The quarter witnessed a fall in Alumina prices due to lower API pricing. The Bauxite segment reported Improved Price/Mix result offset by a small increase in other production costs. The company reported Adjusted EBITDA of $132 million from the Alcoa Bauxite Segment, reporting a marginal decline from $134 million in the previous quarter. The business reported Adjusted EBITDA Margin of 12.7% and 42.4% from Alcoa Alumina Segment and Alcoa Bauxite Segment respectively, as compared to EBITDA Margin 19.6% and 38.2% in the Q3 FY19. The business reported production from AWAC Refining Business at 3.2 mt while AWAC Mining Business reported production of 11.4 mbdt as compared to 11.5 mbdt in the previous quarter, including share of wholly owned mines along with a share of CBG and MRN. Cash Cost of Alumina stood at $200 per ton as compared to $203 per ton in the previous quarter on account of declining prices in caustic soda. The company reported a realised price of $284 per tonne from the Alumina segment as compared to $311 per tonne in the previous quarter. The Management indicated that the reason for lower realization was the fall in one month lagged API on a q-o-q basis. During 3Q FY19 the company reported a cash payment of ~US$20 million for the Cross-Currency Interest Rate Swaps associated with the repurchase of the A$ Medium Term Notes. 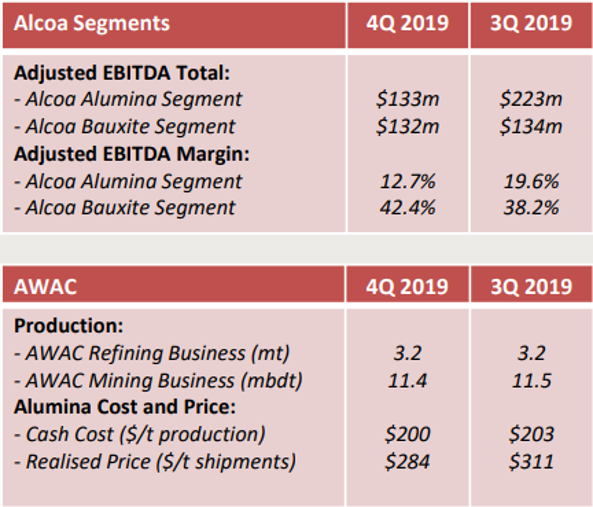 Stock Update: The stock of AWC closed at $2.290 on 17 January 2020, in line with the previous day’s close.  The stock has a market capitalization of $6.59 billion, with 2.88 billion outstanding shares. At current market price, the stock is trading in the lower band of its 52-week trading range of $2.070 to $2.810. The price to earnings ratio is 8.08x on a trailing twelve months (TTM) basis. AWC has delivered a robust dividend yield of 11.41% on an annualized basis. The stock has given positive returns of 3.62% and 4.57% in the last three months and six months, respectively.

South32 Limited is engaged in diversified mining and metals across Australia.

Q2FY20 Operational Highlights for the Period ended 31 December 2019: S32 announced its quarterly updates, wherein the company reported Alumina production at 1,327 kt, depicting an increase of 1% on a q-o-q basis. Aluminium production is reported at 248 kt, remained unchanged from the previous quarter. Energy coal production was recorded at 5,898 kt, depicting a de-growth of 12% q-o-q basis. Metallurgical coal production, during the second quarter of FY20, stood at 1,208 kt, down 27% from its previous quarter. Manganese ore production stood at 1,398 kwmt, down by 1% on a q-o-q basis. Payable silver production and Payable lead production stood at 3,192 koz and 28.8 kt, depicting a growth 7% and 9% q-o-q basis. The quarter was marked by increased in alumina production by 4%, resulting a year to date production at Brazil Alumina. The business witnessed maintaining higher rates of calciner availability at Worsley Alumina as the company deliver initiatives to sustainably increase to nameplate capacity.

Whitehaven Coal Limited is engaged in the exploration and mining activities related to coal.

Operational Activities for the Period ended 31 December 2019: WHC declared its quarterly results, wherein the company reported managed ROM coal production at 3,124, down 58% on u-o-y basis followed by total managed coal sales at 4,485, down by 17% on a y-o-y basis. The company reported Total Equity Coal Sales at 3.9 Mt as compared to 4.5 Mt in Q3FY19. Coal sales mix stood at 49% of high CV thermal coal, 29% of other thermal coal, followed by 22% of metallurgical coal. The pricing of the NEWC Index stood at US$67/ton, JSM Quarterly (SSCC) at US$98/ton and average SSCC spot price at US$77/ton. The company decreased its operational activities in South Africa Energy Coal in accordance with the response to market conditions. The above activity resulted in lowering of the FY20 production guidance. During the quarter, the company completed the sale of its manganese joint venture for US$93 million and the company distributed the proceeds to the Group during the Q2FY20. During the quarter, the company exercised the option to acquire a 50% interest in the Upper Kobuk Mineral Projects which was available with Trilogy Metals. 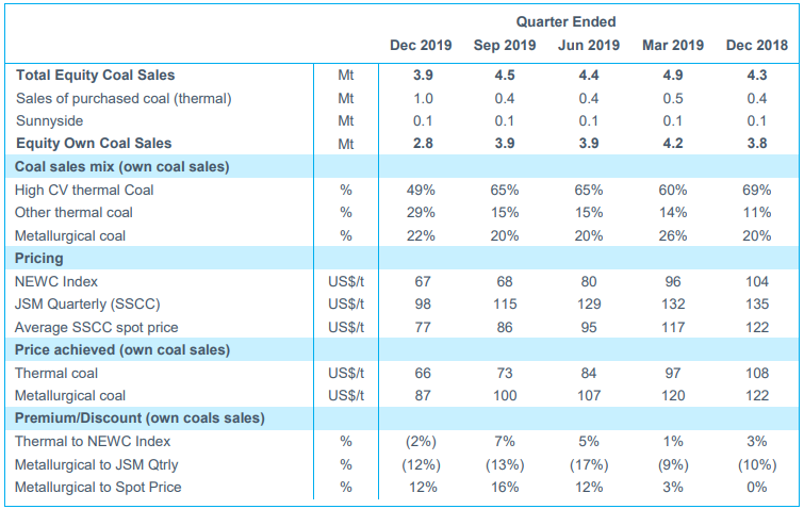 During the quarter, the company acquired property near Maules Creek with productive groundwater resources and purchased temporary water entitlements. The company also indulged into the transfer of various water access licences across the Whitehaven Group. The operations also included hauled water between supply points and mines and increased the use of dust suppressants.

Management Changes: During the period, the company appointed Leigh Martin for the role of EGM People & Culture. The role was newly created to recognize the need fora dedicated leadership to address labour and skills requirements within the organization. The company also appointed Quentin Granger as interim EGM Operations as Jamie Frankcombe resigned from the above post.

Upcoming Strategies: One of the primary strategies involves increasing its coal production from ~20Mtpa ROM to ~50Mtpa. The business is targeting expanding its customer reach, targeting additional export markets with added production across two premier areas – the Gunnedah Basin in NSW and Queensland’s Bowen Basin.

Vickery Extension Project: The Vickery Extension Project is a planned open cut mine with a twenty-year mine life in the Gunnedah Basin with JORC marketable reserves of 178Mt. The above project is conducted by the NSW Government Department of Planning, Industry and Environment (DPIE) which is expected to be finalizing its whole of government (WOG) report on the project. The WOG report will be used by the NSW Independent Planning Commission (IPC) when it completes its final review and determination.