Information Technology refers to the application of computers and telecommunication devices for data storage, retrieval, transmission and manipulation.

IT stocks refer to those companies that are engaged in the development of software, hardware and semi-conductor devices as well as provides internet and its related services.

Below discussed are four IT related stocks. Let us have a detailed look at the recent updates from these ASX listed stocks.

On 18 June 2019, Appen Limited provided an update regarding the change of directorâs interest. Mr Bill Pulver, a non-executive director of the company, holds an indirect interest in the ordinary shares of the company. These shares are held by New Greenwich Pty Ltd, in which Mr Pulver is a director and shareholder as well as a beneficiary of the New Greenwich Superannuation Fund.

On 12 June 2019, the CEO and Managing Director of Appen Limited, Mr Mark Brayan sold 100,000 shares of the company in order to satisfy tax obligations and diversify personal investments. On the same day, Lukas Biewald, the founder of FigureEight, closed the share purchase of APX for USD 1.5 mn as contemplated by the acquisition agreement. 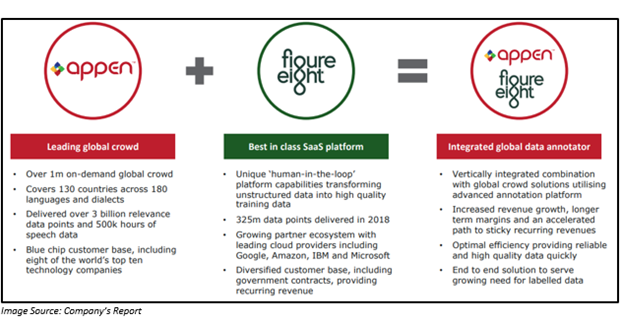 On 15 July 2019, the company made an announcement, providing trading update for the financial year 2019, based on unaudited management accounts as at 30 June 2019.

The company reported an 11% growth in license revenue during the period. Moreover, it reported to have registered strong growth for all key subscription product lines, with ECMaaS growing 23%, Connect surging 27%, Keystone increasing 21% and Trapeze rising 20%.

Overall, the company performance was good during the period. Its revenue remained flat for the period, still the company was able to deliver margin expansion, growth in ARR, and improvements in its suite of products. According to CEO Tony Walls, the increasing proportion of subscription revenue delivers considerably greater anticipations for revenue as well as earnings in the future. Moreover, this would enable the company to plan as well as manage its resources in a better manner. During FY2020, the company will direct its cash flows generated towards its existing product portfolio as well as launch of new products through strategically aligned acquisitions.

Afterpay Touch Group Limited (ASX: APT) is a financial technology company, which aims to make the buying experience of its customer base great. The company, at present, has ~ 4.3 mn active customers and ~ 30,600 active retail merchants. 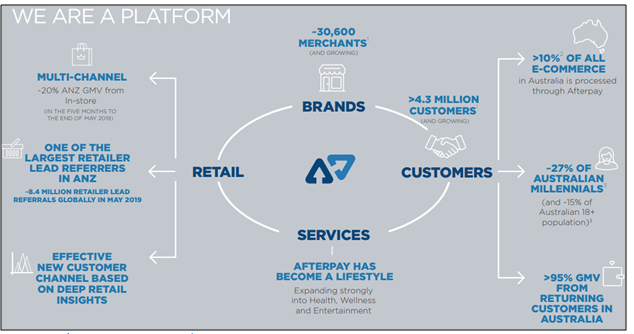 On 4 July 2019, the company updated the market regarding the deferral of the share purchase plan. Afterpay Touch, on 26 June 2019, had unveiled that it would be in the best interest of its shareholders to defer the share purchase plan till the final audit report gets prepared by the external auditor appointed by AUSTRAC and its recommendations.

After the SPP announcement was made by the company, Afterpay received a notice from AUSTRAC, according to which the company was required to appoint an independent external auditor for auditing Anti-Money Laundering / Counter Terrorism Funding compliance. For this, the company would now be working closely with AUSTRAC and will take a formal approach towards ensuring that its AML/CTF compliance is strong.

At the period of the announcement regarding the share purchase plan, the company was in discussion with AUSTRAC; however, it had no knowledge about the decision of AUSTRAC to serve the notice until 12 June 2019.

The company, which has made nominations of three auditors, expects the audit process to start as soon as AUSTRAC shortlists one of the threeauditors.

With this deferral, there would not be any changes with respect to terms and conditions of the SPP. The only change would be the change of the date when the SPP would be offered.

Recently, the company also provided its Board and Executive leadership update.

Bigtincan Holdings Limited (ASX: BTH) is an enterprise mobility software provider, which got listed on ASX in March 2017. The company is majorly focused on helping organisations with an intelligent and mobile-first solution.

BigtincanÂ® Hubâ ¢ is the companyâs sales enablement automation platform, which provides customers with a better experience. Moreover, the platform enables sales as well as service representatives to deliver better and increased business outcomes.

On 18 July 2019, the company announced to have boosted its existing relationship with Anheuser-Busch InBev, which is one of the largest brewers in the world. The expansion is intended at delivering sales enablement to an initial set of autonomous wholesalers across the United States. These wholesalerswould use the BigtincanÂ® Hubâ ¢ software platform of the company to deliver content and provide communications based on SalesAI (the advanced content delivery technology of BTH). Under the terms of the expansion, delivery will start in the first half of FY20.

Anheuser-Busch became the client of the company by the end of the year 2018 using the Bigtincan product for corporate staff. This expanded relationship between the company and Anheuser-Busch demonstrates Bigtincanâs continued success in obtaining and expanding contracts from large enterprises.

The total contract value, covering the expansion, has grown to approximately $692,000.