Property is regarded as the largest asset class in the world, and for Australians, it rightly is a huge component of their total household wealth. The property landscape has attracted market enthusiasts for an ocean of reasons, besides being a value asset and one of the safest investment bets available. Moreover, housing is perhaps the biggest single investment that most people make in their lives.

In this article, we would understand the present stance of the Property market in Australia, which has been making headlines- and not for just good reasons. However, with the trends witnessed of late, is the Property crunch finally on the route to conclude? Let us discuss:

The trade of property in Australia and the perpetual fixtures in the country form the Australian property market. It is non-uniform in nature and elevated variation of it is ideally witnessed across the major Australian cities and regional areas.

The past two years were terse times for the Australian property market, with falling prices in many cities, which is further triggered by the on-going speculation of a recession in the near future, and is likely to take retail sales down and mortgage stress up. Amid this slump, investors were perhaps the first ones to take off, when the property market began to tank a couple of years ago.

However, a silver lining has appeared since the past few weeks, with experts believing that the health of the Australian property market is looking good since it is showing signs of recovery.

Last month, the Australian Bureau of Statistics (ABS) released the Residential Property Price Indexes for eight Australian cities (for June 2019). In comparison to the prior corresponding period, in the June 2019 quarter, for the capital cities, the weighted average of residential property price Index was down by 0.7% and 7.4% in the last twelve months. The overall valuation pertaining to residential dwellings in the country was down by $17,611 million to $6,610,590.1 million. 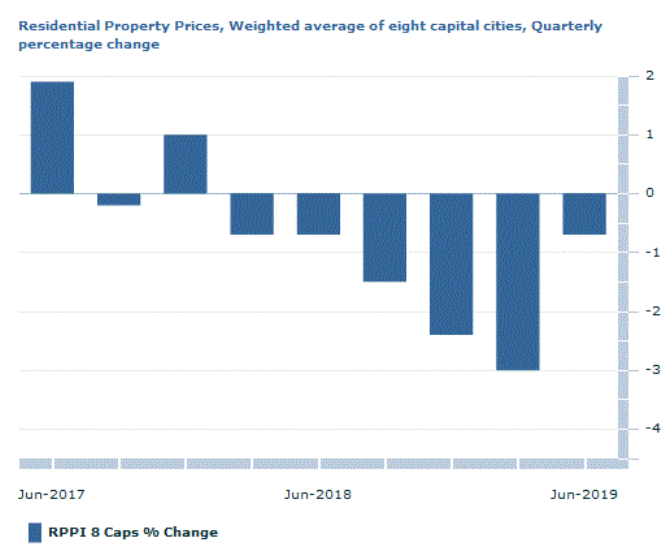 After a historic fall between September 2017 and June this year, the average capital city home prices seem to have turned up again, especially after the federal election phase in May, which eradicated the threat of negative gearing and the capital gains tax discount. As real estate investors renewed confidence, an icing on the cake has been the relaxation of APRAâs 7% interest rate and RBAâs consecutive rate cuts (after a recent third one wherein RBA cut interest rate by 0.25% and the current interest rate stands at lowest level of 0.75%).

Investors and industry experts need to be aware of the recent and optimistic developments in Australiaâs property market, as the property plummet does seem to finally evade:

With a surge in buyer sentiment in the recent months and corresponding price uplifts in Sydney and Melbourne, conditions in the Australian Property space seem to be ripe for investors to pile back in, as per industry experts. The reforms to negative gearing and capital gains taxes, eased mortgage rates and crunching cash returns has opened up positive gearing options.

It is believed by some that amid the risks building for the Australian economy indicating stiff headwinds for the housing market, these events are the silver lining one should ideally look at, as property markets bear the potential to turn the course of slumped phases.

Auction clearance rates should not be ignored, when discussing the property scenario, and these are continuing to track around the mid-to-high range with the results remaining high on larger volumes. This is a direct indicator that consumer attitudes are getting better with increased fuel spending, even though debt levels have been at record highs. However, one should be aware that the housing market is highly sensitive and vulnerable in nature.

Is the Property Crunch Over?

As we discussed the pros of the recent property landscape in the country, the risks and cons hovering over the subject should not be ignored. A few market analysts believe that even though one should take a sigh of relief with the improvements in the recent times, the effectiveness of RBAâs quantitative easing and other tools could be limited, catalysed by the existing abundance of money supply. The policies might encourage people to take greater risks which would consequently inflate the housing bubble.

Besides this, if the country were to then enter the speculated recession, value of riskier assets would drop and stimulating the Australian economy would be a dicey affair, as the demand for the Australian dollar would decrease.

It is safe to conclude that the Australian housing market is undergoing a lot of changes on the consumer, investor and regulatory front. On one end, rate cuts, the election and a modest regulatory relaxation are a good sign but on the other, a fear of recession prevails, as house prices go up and down, and the market remains to be rate sensitive.

The Real Estate Performance on ASX

It would be interesting to see the stance of the Property market in Australia and look at the investor sentiment deciding its course in the coming times, given the dynamic events at the micro and macro level in the economy.

Tags:
Australian Bureau of Statistics Australian Property Market Real Estate Stocks
All pictures are copyright to their respective owner(s).Kalkinemedia.com does not claim ownership of any of the pictures displayed on this website unless stated otherwise. Some of the images used on this website are taken from the web and are believed to be in public domain. We have used reasonable efforts to accredit the source (public domain/CC0 status) to where it was found and indicated it below the image.