Packaging Stocks refer to stocks of the companies with business in the packaging industry. The industry under discussion is a highly important one in global terms. It provides solutions and goods to keep the products safe & reliable, increase the shelf life of the products while maintaining their quality.

According to a leading market consulting group, the packaging industry has achieved substantial growth in the past decade, propelled by the Chinese economic boom, and other emerging regions, along with similar fundamentals that equally drove the growth.

It was also projected that the growth is likely to continue in the decade ahead. Further, the unprecedented rise in the e-commerce industry has escalated the requirements of packaging. The ever-changing consumer preferences and increasing sustainability requirements are likely to prevail in the upcoming decade too.

Let’s discuss two packaging stocks from the ASX to get a better insight on the industry:

On 10 October 2019, the company reported that an agreement was signed with Nippon Paper Industries Co., Limited’s wholly owned subsidiary to sells its Australasian Fibre Business for an enterprise value of $1.72 billion.

The Board of the company has concluded that the offer received from Nippon was compelling and in the best interests of shareholders, following the interest of Nippon in the Australasian Fibre Business of company.

Interestingly, ORA anticipates obtaining proceeds from the transaction, post taxes, transaction and restructuring costs and customary closing adjustments of $1,55 billion. The company has an intention to return the proceeds to the shareholders in tune with $1.2 billion via capital management initiatives.

After the completion of capital management initiatives, ORA intends to achieve its current target leverage, and additional details regarding the return of proceeds to be provided by the company. 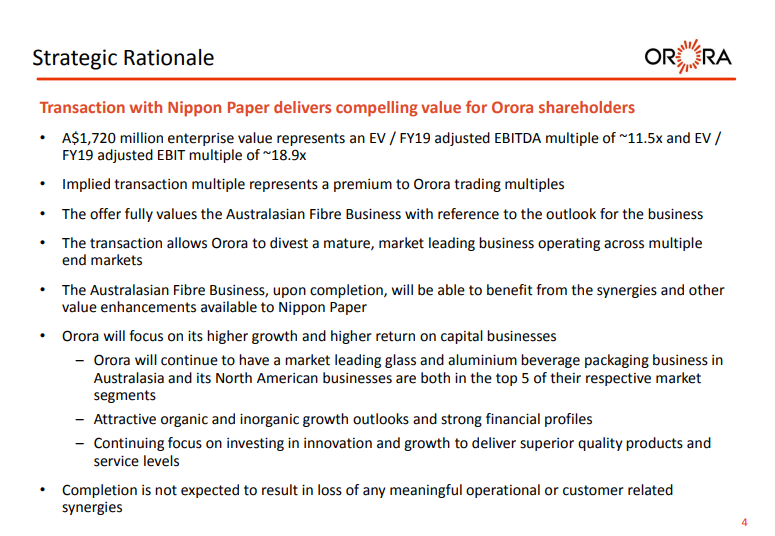 Further, its North American region businesses consist of packaging solutions and visuals. It is believed that there is a potential to scale its business in the region and for that the company intends to utilise superior products, service levels and footprint.

Following the announcement of divestment, the stock of the company soared to higher levels, making up for losses made in August 2019. In August this year, during the release of full-year results for the period ended 30 June 2019, the stock witnessed heavy selling, probably due to shrinking profits.

Despite revenue being up by 12.1% in FY 2019 over the previous year, the statutory NPAT was down by 24% to $161.2 million compared to the previous year. It was reported that the company had incurred significant expenses of $55.8 million, consisting of $35 million for additional decommissioning costs, and $20.8 million in restructuring, impairment charges.

Presently, the investors are rejoicing the prospects of return in the form of capital management initiatives. As a result, on 10 October 2019, ORA last traded at $3.11, up by 13.919% relative to the last close.

At a market capitalisation of ~$22.1 billion as on 10 October 2019, the company is considered as a large-cap entity, recognised in the S&P/ASX 20 Index, among others. 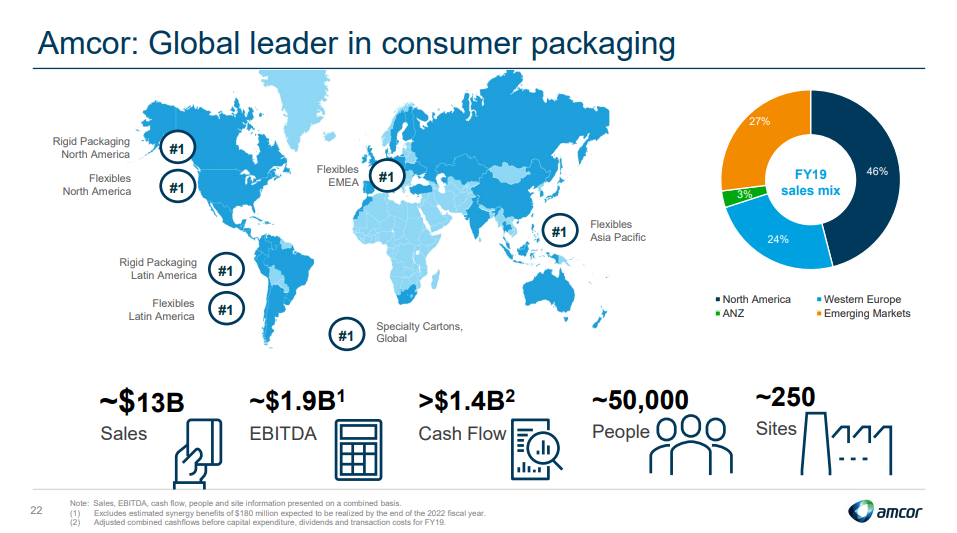 In its full year period ended 30 June 2019, the company mentioned that it has completed the acquisition of Bemis, making Amcor a global leader in consumer packaging while enhancing substantial capabilities in talent, scale, and reach.

In its annual report, it was said that the company is making progress towards its commitment to transform all of its packaging as a recyclable and reusable by 2025. In FY 2019, the company opened its sustainability centre in Europe, and introduced more sustainable products, and utilised more recycled content in products across its portfolio.

Acquisition of Bemis has led to synergies between the two global leaders in the R&D segment in the packaging industry. This has expanded the companies reach and capabilities globally. It was also said that in the upcoming years, the shareholders of the company would benefit from the USD 180 million in cost synergies related to Bemis acquisition by the end of FY 2020. Further, the company has announced USD 500 million in a share buyback.

Reportedly, the company was required to divest its flexible packaging plants in Europe and the United States to secure anti-trust approval for the Bemis acquisition. The combined proceeds after the sale were in the order of ~USD 550 million.

Accordingly, the Board of the company approved the share buy program, resulting in substantial shareholder value. In addition, the company had decided to invest USD 50 million in strategic projects to advance sustainability while scaling towards sustainability.

Some of its ambitious goals for the 2025 target includes making all packing recyclable, to increase post-consumer recycle matter, and collaborating with others to increase rates of recycling worldwide. The strategic investment would be directed to fund the research & development initiatives, extensions to existing partnerships, and investments in open innovation.