But do you know what are Rare Earth Elements?

The rare earth elements are a cluster of 17 chemical elements that occur collectively in the series of the periodic table, consisting of scandium, yttrium and fifteen lanthanide elements. These chemical elements are usually found in the Earth’s crust and are necessary components of a range of products across multiple applications. Their unique luminescent, magnetic and electrochemical properties enable the manufacturing of high-end technologies, creating a substantial demand for such elements.

As there are no real substitutes available for such elements, the expected supply constraint has become a cause of concern for people. Amidst this scenario, discussing the other sources of rare earth elements becomes an important subject matter.

As Australia also possesses some richest rare earth element deposits, the mining companies in the country have begun to re-evaluate already existing rare earth deposits and explore for new ones. Considering this, let us discuss some of the ASX-listed Rare Earth companies below:

ASX-listed Lynas Corporation Ltd (LYC) is the second largest producer of rare earth materials of the world, having resource deposit in Mt Weld, one of the world’s highest-grade rare earth mines located in Western Australia. The rare earth oxides are initially processed and mined at the company’s Mt Weld Concentration Plant. The company then ships the materials to the Kuantan industrial port in Malaysia, further transporting them to Lynas Advanced Materials Plant in Kuantan.

In its recently released consolidated annual financial report for the period ended 30th June 2019, the company reported an annual net profit of $80.0 million relative to $53.1 million recorded in FY18. The company informed that the production of Neodymium-Praseodymium (NdPr) that was Ready for sale was 5,898 tonnes in FY19, in comparison to 5,444 tonnes in FY18.

The company also achieved record Rare Earth Oxide (REO) production in FY19, with its total ready for sale production being 19,737 tonnes as compared to 17,753 tonnes in FY18.

The other key financial highlights were as follows:

The company also announced its 2025 growth plan, which included the following components: 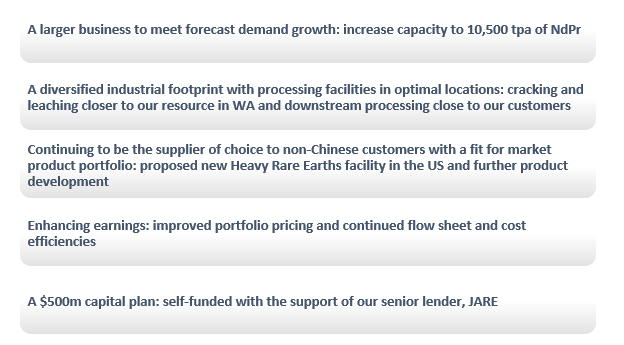 Focussing on the development of heavy rare earth projects, Northern Minerals Limited (ASX: NTU) aims to become the next significant producer of dysprosium outside of China via the development of it’s Browns Range project. The Browns Range Pilot Plant Project that was officially opened on 27 July 2018, is well positioned to turn into a considerable new source of high value dysprosium.

In its recently published financial report for the period ended 30th June 2019, the company notified that FY19 financial year was transformational for the company as it shifted from construction to the operational and commissioning phase at Browns Range.

As per the company, the Browns Range project milled 14,500 tonnes during the reporting period, along with producing a total of 46 tonnes of rare earth carbonate in the second half of the year. The company’s first shipment left Australia’s shores in December 2018.

The company achieved a number of milestones on financing front in FY19, including:

Northern Minerals reported a total income of $2 million and a net loss after tax of $64 million for the period ended 30th June 2019.

On 18th October 2019, NTU ended the day’s trade at $0.053, with a fall of 3.6 per cent in comparison to the previous closed price. The company’s stock has delivered negative returns of 17.8 per cent and 22.5 per cent during the last six months and three months, respectively.

With an aim to become one of the lowest cost producers of NdPr, Peak Resources Limited (ASX: PEK) is engaged in the development of Ngualla Project, which is one of the world’s highest grade and largest undeveloped NdPr rare earth projects.

Peak published its annual report for the year ended 30th June 2019 recently on the ASX. The company notified that it focussed on the development of its 75 per cent owned Ngualla Rare Earth Project during the financial year.

The company primarily focussed on securing the final permitting for UK refinery site, investigating financing avenues to give it a 100 per cent ownership and control of the Ngualla project and off-take negotiations with critical rare earth consumers across the world.

The company informed that it is set to achieve 100 per cent ownership of the Ngualla Project as it executed a Binding Heads of Agreement with International Finance Corporation and Appian Pinnacle Hold Co Limited post the end of the year, to roll up their ownership interests in Peak African Minerals (PAM).

Peak’s stock ended the trading session at $0.036 on 18th October 2019, with a fall of 2.3 per cent relative to the last closed price. The stock has delivered a massive return of 52 per cent on a YTD basis.