Gold prices took a jab in the international market post the United States Fed reduced the interest rate by 25bps. The gold prices rallied previously over the higher rate cut expectations of 50bps.

The Federal Reserve Chair Jerome Powell finally brought down the interest rate, which was initially demanded by the United States President Donald Trump. The decision of the rate cut in the Fed meeting held on 31 July 2019 witnessed a first-rate cut post the 2008 financial crisis.

The United States President took down on the Federal Reserve previously for keeping the conditions tight and recently expressed angst over the Fed and mentioned that âwhat market wanted to hear is that this rate cut is among the first of a lengthy and rate-cutting cycle, which would keep pace with China, European Union and other countries around the world.â

The recent comment from the United States President was in response to the Fed chair Jerome Powell comments that the rate cut was just a midcycle adjustment, which in turn, slammed the doors for the market participants, forecasters, and speculators to anticipate over the possibility of the number of possible rate cuts ahead.

Jerome Powellâs statement worked against the market expectations for further cuts by mentioning the rate cut as a midcycle adjustment. Over the Fed Chair comments the United States President said on twitter that âas usual the Fed Chair let us down.â

Mr Trump suggested that the United States is not getting much help from the Federal Reserve.

Due to a walkout from the Fed Chair from the stance of a rate cut in future, dollar prices rallied in the international market.

Even though the gold prices are feeling the pressure of a rise in the dollar, the investors should dig out more about the gold-related fact and figures as the drop in gold prices is over the speculation that the changes of a future rate cut are either oblique or opaque.

The H1 demand of gold stood at 2,181.7 tonnes and recorded a three-year high level. The central banks buying and the higher inflows from the gold-backed ETFs boosted the gold demand in the first half of the year 2019.

Central Banks as a Net Buyer:

Central banks and other institutions added about 145.5 tonnes in the first quarter of the year 2019, and about 224.4 tonnes in the second quarter, which in turn, underpinned a 47 per cent Y-o-Y growth. 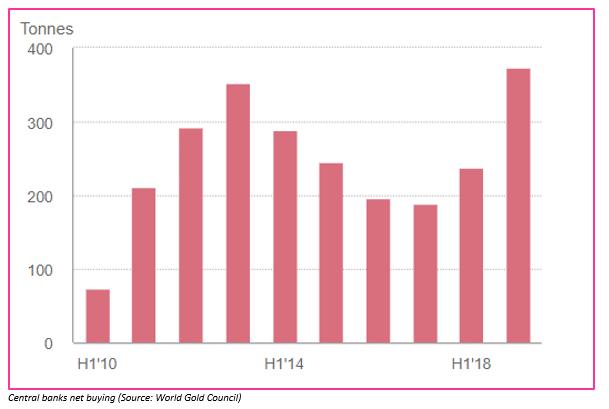 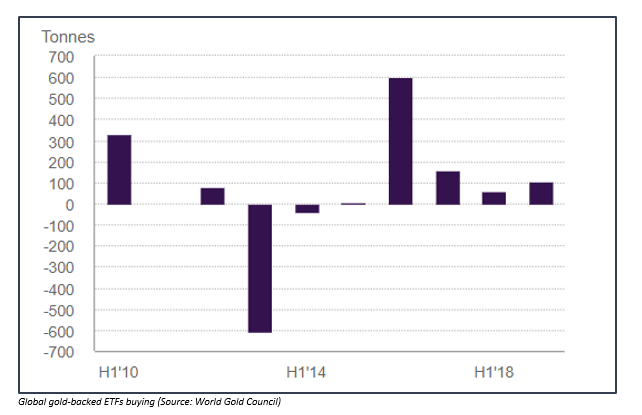 Apart from that, there are many more facts and figures, which need investorsâ attention, and investors should monitor and analyse the market further before entering any long or short in the gold market.

The divergence on the indicator suggests that the prices could take a short-term correction before resuming the original trend. The behaviour of market participants and the future event would govern the price actions ahead. Apart from the support of upward sloping trendline, gold prices have a psychological support level of US$1400, and investors should monitor the level closely to decide on further trades in the market.

If the prices sustain above the low of the candle marked as 0 ( approx. US$1380), the projected Fibonacci series could act as the hurdle and possible targets for the future movements; however, the Fibonacci projected would become void if the prices breach the level of US$1380.

The ASX-Listed gold miners reacted sharply over the Fed opaque stance related to the future possibility of the rate cut, which dragged the gold prices down and in turn, dragged the gold miners yesterday. However, few gold miners on ASX have built a healthy hedge book during the June 2019 quarter to avoid such volatility and investors should monitor such stocks and analyse fundamentals to reckon the price movement ahead.

For now, the gold stocks on the Australian Securities Exchange have taken a down stroll amid fall in gold prices. Gold miners such as Resolute Mining (ASX: RSG), Saracen Mineral Holdings (ASX: SAR), Northern Star Resources (ASX: NST) and many more have taken a hit.

RSG settled 5.352 per cent lower, while NST settled 7.225 per cent lower against their respective previous close on 1 August 2019.

However, despite a negative closing, the gold miners on ASX have shown slight recovery from their respective lows of the day yesterday. While RSG plunged to the level of A$1.590, the stock recovered to end the session at A$1.680, up by over 5.66 per cent from its dayâs low.

Likewise, SAR plunged to the level of A$3.970, the stock ended at A$4.050, up by over 2 per cent from the dayâs low. The underlying fundamentals or a profit booking activity could justify the recovery in these stocks around closing, which would require further investigation.

Gold prices recovered sharply around 10:00:00 UTC-4 post a tweet from the United States President over the U.S-China trade relation.

In his recent tweets, the United States President Donald Trump said that Washington would start exerting additional tariff of 10 per cent on 300 billion dollars goods import from China, which is turn, fuelled a pessimism among the market participants over the U.S-China trade relation and supported the gold prices in the international market.

Post the tweet gold recovered sharply and pulled ASX-listed gold miners along with it. Resolute Mining which previously settled 5.352 per cent down rose today on ASX to touch the level of A$1.950, up by over 16 per cent from its previous close on 2 August 2019.

Saracen Mineral and Northern Star followed the same trajectory and the stock reached over 12 per cent and 7 per cent higher from their respective previous close on 2 August 2019.