It is well known that Australia’s largest trading partner is China, and the country has long enjoyed the benefits of China’s economic progress. Asia’s largest economy is an important destination for approximately one-third of Australian exports and contributes to around one-fifth of imports entering Australia. However, the recent COVID-19 pandemic outbreak has brought things to a standstill as trade barriers came into place due to cross-border restrictions. Recently in the wake of the pandemic, it is being speculated that China would be slapping significant tariffs on Australian barley, meat and even wine imports into the country. Barley is probably one of the top three agriculture exports from Australia to China. Thus, the tariffs would come as a substantial blow to the barley growers.

According to market experts, the growing tensions between the two countries can be attributed to Australia lobbying with its counterparts to push for an independent enquiry into the COVID-19 outbreak. Some segments of the market believe that Australian producers have made excellent inroads into the China market, and the tariffs would not happen. Regardless, given the speculations, the economic relations between the two countries are at stake.

Speaking of Australian Agribusinesses, investment in the agricultural sector is considered to be beneficial at this point of time as market players look for defensive stocks to shield their portfolios. This is because most agricultural companies belong to the consumer staple sector, which is immune to economic cycles or even natural calamities due to their essential nature.

Let us browse through the following three ASX-listed consumer staples stocks and their ongoing business activities amidst the global market turbulence and as Australia sets out to slowly reopen its economy.

Select Harvests Ltd operates as a fully integrated almond business comprising orchards, primary processing, secondary processing, trading, and Consumer products. Select Harvests not only imports a full range of nuts and a wide range of ingredients for their Consumer Products but is also one of the largest exporters of almond internationally to supermarkets, health food stores, other food manufacturers and retailers.

Crop Update: Select Harvests announced that 97% of its orchards had been harvested while 90% of the crop was harvested in near perfect conditions. Rains impacted the remaining harvest, but without affecting the quality of crops. Subsequently, around 60% of the estimated crop was delivered to the Company’s Carina West processing facility. Approximately one-fourth of the crop has been processed already.

The Company also added that the investments in horticultural practices and new technology in the northern Victorian processing facility had been very beneficial. At the same time, the Company has been recording higher productivity levels at Carina West processing facility.

All these figures indicate that the underlying demand remains strong in the market and Select Harvest is confident about continued growth in consumption as distribution channels return to normal.

GrainCorp Limited operates as a food ingredient and agribusiness Company which processes and distributes wheat, barley, and canola, as well as offers a range of malt products and service to brewers and distillers. The Company also supplies and refines edible oils for customers worldwide.

First Half FY20 Results: For the six months ended 31 March 2020, the Company recorded a profit after tax of $388 million (HY19: $59 million net loss after tax), marking a significant repositioning of the Group’s portfolio, including the sale of the Australian Bulk Liquid Terminals business and the successful demerger of United Malt. The Underlying EBITDA for the period amounted to $183 million, and the underlying NPAT was around $55 million, both up substantially on the prior corresponding period.

GrainCorp boasts of a robust balance sheet with zero core debt, which can be attributed to its new operating model and the measures been implemented for the management of crop variability and maximisation of assets. Besides, the market conditions seem to be improving for the Company, complemented by the heavy rainfall in eastern Australia which has further boosted optimism for a much larger crop harvest later in 2020.

Most importantly, while the situation created by the COVID-19 pandemic has been challenging for most of the industries, Food & Agriculture is considered as essential service, and GrainCorp has exhibited all the resilience through the COVID-19 crisis to serve its customers.

Melbourne, Australia-based Treasury Wine Estates Limited is a word-leading wine Company with operations spanning across the globe including Australia, New Zealand, Asia, Europe, and the Americas. TWE sells products under the brands including Chateau St Jean, Penfolds, Beringer, Lindeman’s, Beaulieu Vineyard, Wolf Blass, amongst others. The Company is engaged in the whole lifecycle of wine manufacturing from viticulture, winemaking, marketing, sale, to the distribution of wine through distributors, wholesalers, retails chains, independent retailers, physical outlets, as directly to consumers.

The Group recently relodged its September 2019 Investor Day Presentation on 11 May 2020 highlighting its journey and business strategy. 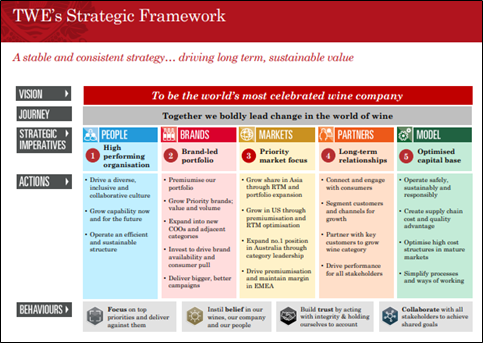 In an update provided last month, the Company informed that in China, TWE’s staff has recently returned to office premises, as have most of its partnership network. While Q3FY20 depletions and shipments were significantly impacted as a result of the nationwide shutdown, TWE is now working closely with these partners to resume operations through the remainder of FY20, where shipments will remain appropriately calibrated to the rate of depletions as consumption rates normalise.

Treasury Wines maintains a flexible and efficient capital structure and as on 31 March 2020, TWE’s liquidity was ~$1.1 billion (including undrawn committed debt facilities and cash).

NOTE: All figures are in Australian Dollars unless stated otherwise.