As development in e-commerce gains beneficial results, cyber - crimes also seek to acquire good pace. The menace of double spending, leading to the need for a reliable third party has been forcing investors, impose a barrier in their investments across various financial institutions and sectors. Despite the online frauds in the online trading and potential risks and price volatility, the global stipulation for Bitcoin has already been a highlight in the worldwide market. The bitcoin has hit a home run in the scenario because of the blockchain transaction method.

Blockchain is a public distributed ledger which keeps a record of the transaction on the bitcoin investment game. The sweeping market innovation of the transaction type has no cost of trade and has helped in curing the dilemma of double spending.

Blockchain method has derived this name from its practice of embedding the data in blocks. Flaws as that of double spending in the trading system can make the economy swallow the bitter pill of inflation. However, the Blockchain method has headed it off at the pass incorporating its transparency with the hash tool. Hashing refers to recording the data in a cryptographic format using mathematical algorithms which integrates the security of the data.

The chain initiating first block or the genesis block contains its secured and verified transaction data which, when encrypted in the block produces an indifferent hash. The successive blocks, along with their data, contains the hash of the previous block. In the same way, as new blocks go on adding into the chain, the exposure of hacking of the data goes on declining dressing the blockchain method for success in the scenario.

Another alluring factor is the decentralized nature of the blockchain technology. The integrity of the data in the blockchains is not affected by a single entity but by an enormous number of miners validating the day to day transactions. This guards the data against online frauds, exposing the investor to the relevant information through the public address of the firms operating in the market. In addition to this, it has also improved the financial efficiency of the system by eradicating the need of a third party which has led towards a fall in the fee costs associated with banks or any other institution.

However, as we know, nothing exciting is ever wholly one-sided, and neither is the blockchain system. Some stumbling blocks hinder the smooth track of the modern and subtle transaction tech. As the data is embedded in the blockchain is very secure; therefore, it is incredibly volatile to online crimes.

There remains a constant fluctuation in the market of blockchain dependent financial assets as that of the bitcoin as the transaction type, and bitcoin itself is very new in the global trading system hence making it a highly risky investment. Not only the invaders but the bitcoin miners and owners themselves can lose all their gains. If the keys to their asset data in the blockchain get lost or anyone else gets it, they can potentially rob their data and control it.

Additionally, high-power usage and transaction costs are also a matter of concern. Because of the decentralized character of the blockchain, many CPU's operate across the global market. This results in excessive use of energy, which is more than the total energy consumption of some of the nations. Some sources state that more than 350,000 transactions take place in a single day and accounts for 470 kilowatt-hours for completion of an only bitcoin strategy. It has also led to a threat to the fossil fuels in the worldwide economy as most of the energy is consumed through their exposure, which in turn can disturb the energy supplies.

The transaction costs in the blockchain dependent – bitcoin was approximately 5.4 times higher in February 2019 in comparison with the price in January 2019.

Let’s have a look at two ASX listed businesses which are incorporating blockchain technology to serve its customers and grow its market.

Webjet Limited (ASX: WEB) is engaged in the digital travelling business. The firm provides its services in the global wholesale and consumer markets using wired routes. The innovation of it’s leading technological subsidiaries, including the Business to Consumer Travel (B2C Travel) and Business to Business Travel (B2B Travel) operating in the regions of Europe, Middle East, Africa, North America and Asia. Webjet is the leading online travel agency in New Zealand and Australia. The B2B tool aims to offer the most extensive range of hotels at the lowest of costs with the help of lots of hotels, Sunhotels FIT ruums and Jac Travel solutions.

The firm has recently introduced two underpins – the Rezchain and Rezpayment solutions. Rezchain is a recent innovation which will use the platform of blockchain for its functioning. It is introduced as a component designed to ease the settlement conditions between any two parties assisting in the verification of booking confirmation as a part of their B2B hotel business. Rezpayments is WEB’s in-house Payment Card Industry compliance solution. It is already deployed in Webjet OTA and Online Republic businesses. Rezpayment opens new opportunity for Webjet including the applicability for other companies that accept credit cards online. 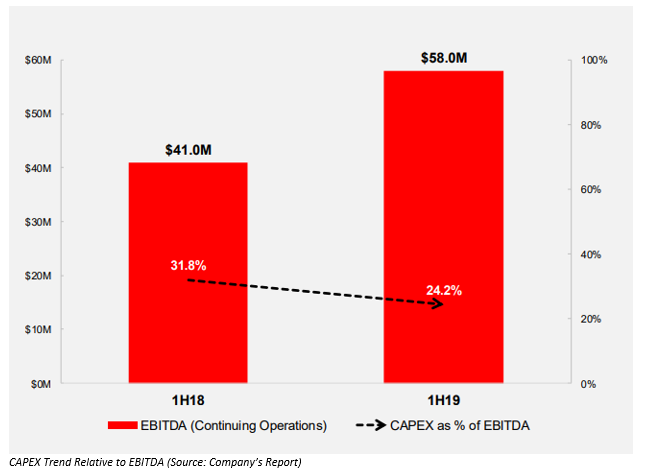 The 1H19 showed some outstanding results in Webjet's performance. The B2B innovation WebBeds was a significant success and declared as the leading business by EBITDA. It saw a rise from $41 million in 1H18 to $58 million in 1H19 and aims to increase the growth rate to 5 times the market. TTV margins also saw a continuous improvement in their movement. A further rise of $40 million is expected in the financial year of 2019. Webjet flight bookings also exploded with a 4.1 per cent rise in year on year growth with the OTA contributing 50% of the entire OTA of the flight market. The company continues to target the bookings growth three times the overall market and expect the TTV bookings to maintain the same trend in 2H19.

The stock has traded almost flat on a one-year return basis, the stock has delivered a return of 25.07 per cent and -9.11 per cent in the past six months and one month respectively.

Security Matters Limited (ASX: SMX) is an Israeli B2B technology company listed on the Australian Securities Exchange (ASX) engaged in supply chain checks of goods using the blockchain technology. SMX’s highly secured and patented technology for marking the products as they move around the globe during the market process of production, packaging and manufacturing has streamlined asset tracking, the authenticity of the product and quality check. The marker is unique to every customer with a custom-made profile for their produce.

The tech-guard firm aims to assist many Companies engaged in sectors, including food, pharmaceutics,

electronics, precious metals etc. in maintaining the integrity of their products and, defeating the menace of the replica of a firm's products and ransack of the brand's name. The company focuses on leading the physical to digital record sector for real goods.

On June 11, 2019, the company announced that it had kickstarted business discussions with Ambar, one of the leading animal feed producers in Israel. With the ongoing progression in projects within the animal/feed agriculture sector and the successful completion of the phase two pilot project has managed an agreement aiming future collaborations with Ambar. The phase two pilot project commenced in the first quarter of 2019 was initiated to check the outcome of incorporating the unique tech and the animal feed properties through a drop-in solution during the production process.

The founder and CEO, Haggai Alon, expressed his gratitude to Ambar and mentioned the stunning nature of their unique and ingenious innovation in technology. He also stated that he seeks to aim the EU and Australian market in future. Ambar too expressed its glee and continuous efforts in bringing something new and creative. This type of technology will not only add to the integrity but will also continue to cultivate their leading position in the agricultural/livestock sector.