American author and activist Michael Pollan states that ‘Were the walls of our meat industry to become transparent, literally or even figuratively, we would not long continue to raise, kill, and eat animals the way we do.’

Apart from the many inferences a reader can derive from this statement, it is clear that the meat industry is stable and evolving, considering the fact that it adheres to food- a basic necessity without which an economy cannot thrive.

According to the Organisation for Economic Co-operation and Development (OECD), over the past approximately 20 years, the total meat consumption in the world was up by 64% at an average rate of 2% each year for sheep meat, 4% for poultry, 1% for beef and 2% for pork.

The meat industry in Australia is robust, evolving and always considered to be one of the country’s finest sector. Australia is the world’s largest sheep meat and goatmeat exporter and the third largest beef exporter (following Brazil and India). Let’s consider the below mentioned points to get a holistic idea of the Australian Meat Industry:

Australia’s red meat and livestock industry turnover was recorded at over $65 billion in 2017-18, up by 1% on the 2016-17 (revised) numbers and by 38% when considered since 2012-13. This accounted for approximately 2% of Australia’s total key industry turnover.

Primary drivers of this uptrend were increase in turnover in the on-farm (59%) and feedlot sectors of the industry. NSW, Victoria and Queensland together accounted for 74% of red meat and livestock industry turnover in 2017-18.

Production and Consumption of Meat in Australia

As per Meat & Livestock Australia’s 2019 State of the Industry Report focusing on The Australian Red Meat and Livestock Industry, Australia accounted for around 3% of global beef production and around 7% of global sheep meat production in 2017. In the following year (2018), the country produced 736,557 tonnes cwt of lamb and mutton and 2.3 million tonnes cwt of beef and veal. 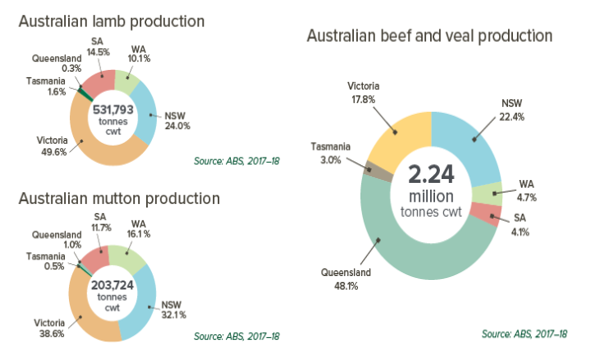 Interestingly, the consumption of mutton in Australia is almost non-existent. This is due to a reduction in the national flock size, shift in the production focus of producers, change in consumer attitudes and the increasingly developed export markets.

Export and Import Position of Meat in Australia

Before acquainting ourselves to facts, it should be noted that Australia is the only exporting nation to impose in-market animal traceability and animal welfare standards.

A couple of years back in 2016, The top importing countries of sheep meat were China, France, the UK and the US and the key importers of goat meat were the US, the UAE and Saudi Arabia.

Now that we understand the Australian Meat Industry, let us concentrate on a progressive subject entailing it- Plant-based meat.

The Clean Meat Revolution has taken a toll over today’s contemporary and conscious world. Producers and consumers are gradually becoming wary of livestock protection, which has sprung up the concept of meat products, but derived from plants. The concept of lab-grown meat is definitely gaining traction across the world.

Plant-based meat products, which can be rightly referred to as meat substitutes mimic the properties which are found within natural meat. This promotes sustainable and environmentally friendly meat alternatives, as the taste, look and feel of these products are the same as actual meat products. The only difference is that they are processed using plant and non-animal products/ supplies.

Pacing with the global growing appetite for fake meat/ Plant-based meat/ lab-grown meat, Australians have made the concept one of the hottest food trend of 2019. Noticeably, there are now plant-based meats in Australian supermarkets and restaurant menus and citizens are growing concerned for the environment and making the switch.

Let’s take a look at the below highlights to concretely grasp the clean meat growth in Australia:

To read about the Clean Meat Revolution across the globe, we encourage you to READ HERE.