Australia To Jostle Qatar for the LNG Crown; How Long Would the Reign Last?

Australia exported 75 million tonnes of LNG in 2018-19, which accounted for 21 per cent of the total global trade during the period. The global demand for LNG is forecasted by industry experts to witness an increase in energy generation by 2021, and Australia is all set to surpass Qatar in LNG exports over the coming years.

The 75 million tonnes of LNG exported by Australia in 2018-19 is anticipated by the Department of Industry, Innovation and Science (or DIIS) to grow by 8 per cent in 2020-21 to stand at 81 million tonnes, as the recent wave of LNG investment increases the overall output.

The global trade in LNG witnessed a decent growth over the past couple of years amid strong demand from Asia, and as the new projects commissioned across the globe between 2009 to 2015 to increase the production capacity in the United States, Australia and Russia.

The DIIS anticipates that the continued expansion in global LNG supply capacity would either surpass or would remain in line with the global LNG demand in 2019 and 2020, before the global production volume falls drastically in 2021, to rebalance the demand and supply dynamics. 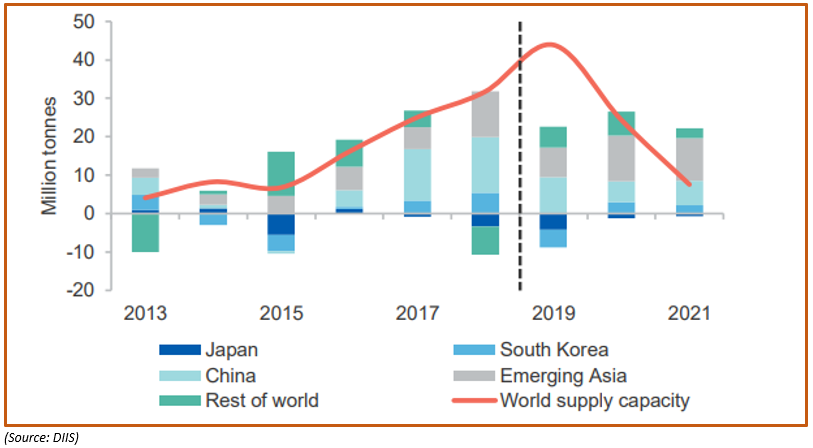 Japan is the world’s largest LNG importer and is also the largest consumer of the Australian LNG supply. Australia’s LNG export revenue stood at $50 billion in 2018-19, of which 47 per cent revenue was contributed by Japan.

In 2018, Japan imported 81 million tonnes of LNG; however, the overall import marked a 9 per cent Y-o-Y decline in the first eight months of 2019, as the temperature remained warmer than anticipated at the beginning of the year. Also, the share of nuclear energy generation increased in Japan gradually, which exerted slight pressure on the LNG imports.

To Know More, About the Increase in Nuclear Energy in Japan, and how would it impact the ASX-listed Uranium Stocks, Do Read: ASX-Listed Alternative Energy Stocks Under Investors’ Lens as Oil Risk Surmounts

However, the local policies of Japan and stringent actions over the nuclear plants could support the LNG imports and act as a risk factor for the Australian uranium markets. The Nuclear Regulation Authority in Japan could order a shutdown of any nuclear plant in Japan over the non-implementation of counterterrorism measures.

Apart from that, several nuclear plants are missing the deadlines amid public opposition in fearmongering over the previous Fukushima Daiichi nuclear disaster, which could support the LNG imports in the country, and holds risk for the uranium sector.

To know More, About the Australian Uranium Industry and Its Interaction with Japan, Do Read: Australia Anticipates lower Uranium Exports; ERA Climbs 15% for the Month

The overall imports of LNG also witnessed an increase during the first eight months of 2019 and stood 15 per cent higher on the Y-o-Y basis; however, the imports slowed during the recent months as the LNG demand took a hit amidst of the trade tussle with the United States.

The DIIS anticipates, that the LNG imports would witness strong growth in China amid its stance to reduce the carbon footprints, and the country aims to increase the share of LNG in the overall energy mix to 8.3-10 per cent in 2020 and to 15 per cent in 2030 from 7.0 per cent in 2017.

To Know More, About Australia Policies to Achieve Net-Zero Emissions, Do Read: Australian Government Policies and Programs To Attain A Net-Zero Carbon Emission

Apart from China, South Korea, Europe, and emerging Asia would also witness a surge in the LNG demand. 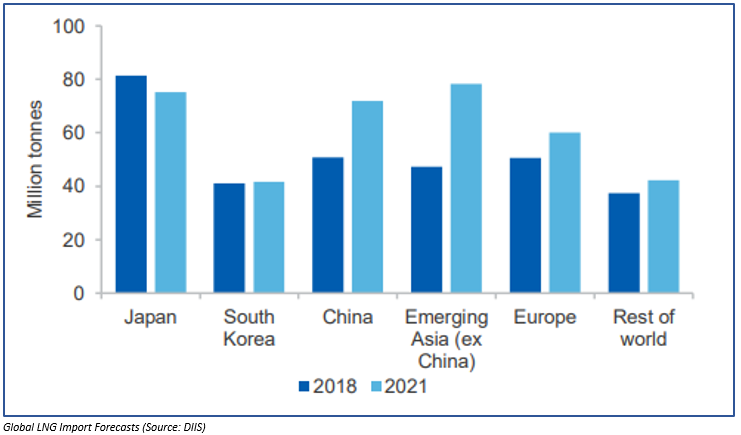 The global LNG production capacity witness exponential growth with new projects coming along in the United States, Australia, and Russia, which raised the nameplate capacities of these nations in 2018.

The wave of surmounting production still got some spark left in it, and the DIIS anticipates the global supply to increase rapidly in 2019 and 2020 amid ramp-up production in the United States followed by Australia.

To Know More, About the LNG Expansion in the United States, Do Read: United States Likely to Retain the Label of Net LNG and Natural Gas Exporter

How Tough Would be the Challenge Against Qatar?

As per the data from International Energy Agency, Qatar exported 76 million tonnes of liquified fuel in 2018, and the exports ranged between 72-77 million tonnes per annum since 2011, with occasional peaks around 80 million tonnes a year.

While the production from Qatar is anticipated by the DIIS to remain steady for a while, Australia could take the LNG crown with a forecasted nameplate capacity of 88 million tonnes per annum amid ramping up at the Prelude and Ichthys LNG prospects.

The international giant- Shell shipped the first LNG cargo from the Prelude LNG prospect in June 2019, and the production is further anticipated by the industry experts to increase in 2019-20, while the production at the Ichthys project remained 80 per cent of the nameplate capacity in June 2019 quarter.

In the value terms, the exports earnings are anticipated by the DIIS to stand at $52 billion in 2019-20, up by 4 per cent from the previous year. 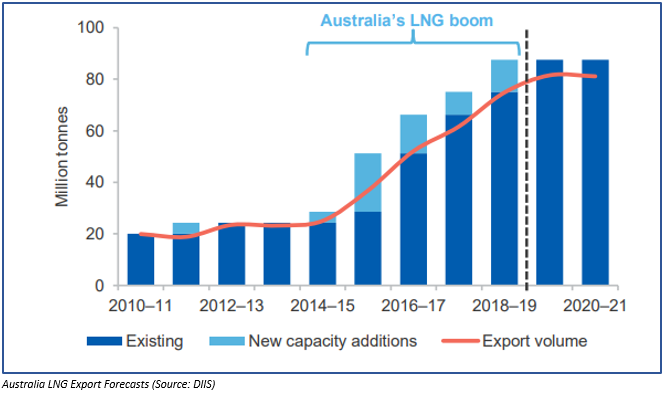 The DIIS slashed its value forecast for 2019 by $1.5 billion and for 2020 by $1.6 billion against the June 2019 quarter forecast amid anticipated fall in the oil-linked LNG prices.