ASX oil & gas exploration companies are performing relatively better as compared to the global oil and gas explorers as the nation is currently witnessing a shortfall in the supply chain of natural gas, which is further providing gas explorers such as Senex Energy Limited (ASX: SXY) with lucrative opportunities.

Recently, SXY announced that the Project Atlas secured its first gas sales ahead of schedule post the commencement of the first two trains of the five-train.

The 15 petajoules per year Project Atlas gas processing facility of the company started the production of the sales gas, which the company secured via sales agreement with CleanCo- A Queensland Government-owned corporation.

Senex is currently addressing the east coast gas crisis and supplying the Wallumbilla Gas Hub with the 60km Project Atlas pipeline, at a fixed price, in line with the current market levels.

The contract complements the previous gas sales agreement inked by Senex with CSR Limited (ASX: CSR) and Orora Limited (ASX: ORA), which would start on 1 January 2020.

Project Atlas has delivered gas from its first acreage dedicated to addressing the domestic gas situations, and from appraisal to productivity in such a short time is an appreciable task completed by the dedicated team and Managing Director- Ian Davies .

While the work done by the company is appreciable, the support provided by the Queensland government could not be overlooked. The Government provided the Petroleum Lease to the company 18 months back, and Senex progressed with a rabbit pace to achieve production on budget and ahead of schedule.

Senex now plans to complete an initial ~60 well drilling campaign in the middle of the year 2020 and intends to ramp up the production to 12 petajoules per year by the end of the financial year 2021.

Currently, 23 drilled wells of the initial ~60 well mark completion and 15 wells are currently producing over three terajoules per day.

Extension for the Existing Sales Agreement with Orora

In May 2019, Senex inked a sales agreement with Orora to supply 3.3 petajoules of natural gas from 1 January 2020, which post the consent of both the parties, has now been expanded for further six years.

Get Ready to Pay Higher Bills

While Senex is currently dedicated to addressing the current domestic gas shortage over the higher LNG exports, Santos Limited (ASX: STO) is also ramping up the production capacity and is targeting cumulative annual growth rate in production of over 8 per cent to 2025.

To Know More, Do Read: Santos Legacy of Growth and Productivity to Continue Post A Hiatus in FY2019?

The current shortage, coupled with a short-term reduction in production guidance by few oil & gas explorers such as Santos, could keep the electricity prices up for a while in the domestic market. The AEMO has already planned for the coming peak summers, which is already anticipated to witness large blackouts over the running out of coal-fired generation and scarcity of natural gas.

However, the electricity market operator has already laid down plans to deal with the estimated large power cuts, yet, the higher cost measures could raise your bills this summer.

But, Keep Clam As Summer Is Upon US! 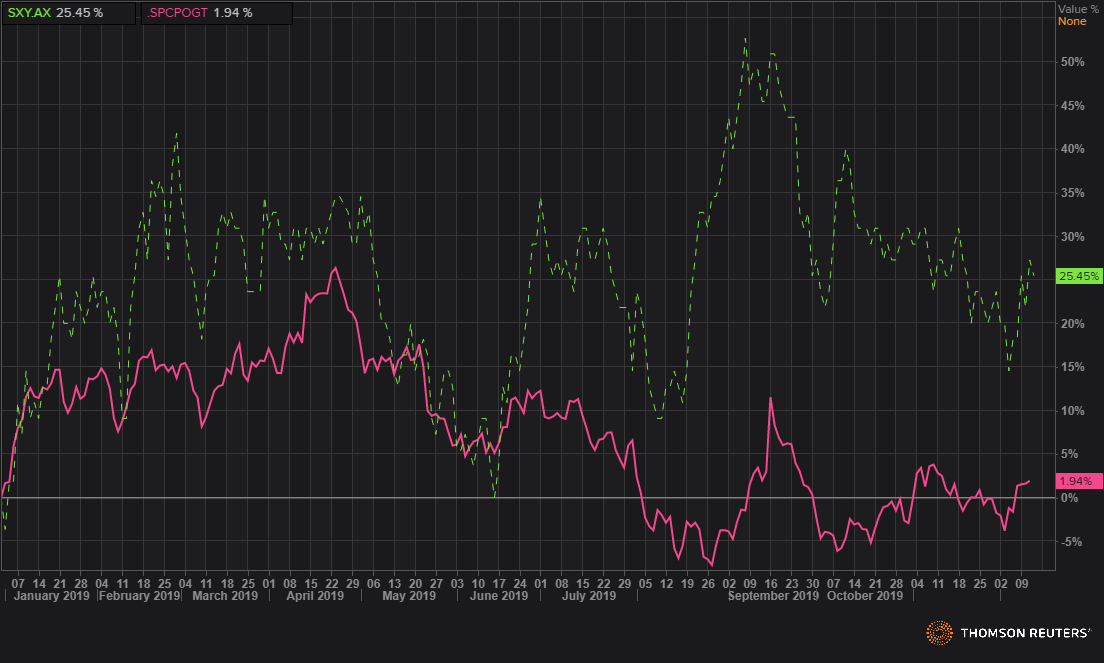 On comparing the YTD returns delivered by the stock of the company, against the S&P Commodity Producers oil & gas index, which tracks the global large-cap oil & gas exploration companies, it could be witnessed, that SXY clearly outperformed the global oil & gas explorers.

The better performance by SXY could be attributed to the domestic natural gas conditions, which is currently supporting the share prices of the company.

On the daily chart, the stock is presently trading below Span A of the Ichimoku cloud, which is the mean of the conversion line and the base line and taking a hurdle at it.

The gap between Span A and Span B, which is the mean of 52-day highs and lows, is narrowing down, which further suggests that the downtrend in the share prices of the company is nearing to an end.

The 14-day RSI is complementing the indication from Ichimoku, and the current value of the RSI is above the mean of 50.0 at 54.48, which further suggests that the prices are currently at the crucial stage, and break above the Span A and sustain or failure to do so would decide further stock price action in SXY.