However, the decline in gold prices in the global market is exerting pressure on the gold stocks on the ASX, with many trading in the red zone for quite some time, despite significant progress across the gold prospects.

To know how the Australian gold industry and how its players are performing and performance going forward, Do Read: ASX Gold Stocks At The Brim Of The Rejuvenating Gold Industry In Australia

The Australian gold miner announced that the company would partner with Aggreko plc- a global leading power generation provider for the development of a new hybrid modular power station at the Syama Gold Mine, Mali, which is currently undergoing through the repairing work of a sulphide roaster.

KLA recently announced the new drill results from the underground exploration conducted by the company at the Macassa Mine in Kirkland Lake, Ontario, Canada. The new results included 71 drill holes, which accounted for 29,207m of drilling from the exploration drifts on the 5300-foot level and 5600 Level Ramp Development along the east and west.

The company presented the results from the three key targets rigs, namely SMC East, SMC West and the Amalgamated Break, and would further continue the drilling from the 5300 Level and 5600 Ramp till the end of the year.

KLA intersected high-grade mineralisation about 200 m northeast to the existing Mineral Resource via 41 holes drilled to the east of the SMC from the 5300 Level. The company also completed a total of 16 drill holes from the 5300 Level west exploration drift to target the west and lower SMC, which resulted in high-grade intersections up to 275 m west of existing Mineral Resources.

SAR announced that the company entered an additional hedge of 200,000 ounces of gold and received the ministerial consent for the proposed acquisition of Barrick Goldâs interest in the Newmont operated Superpit Gold Mine in Western Australia.

The company entered the hedge at an average price of $2,187 per ounce with scheduled deliveries out to the December quarter 2022, which would take advantage of a strong Australian-dollar gold price and would further boost the financial position of the company to repay the $400 million debt amidst the 50 per acquisition of the Superpit. 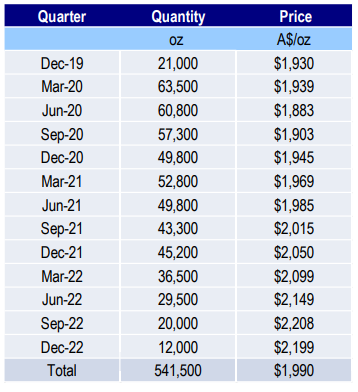 While RSG, KLA, and SAR remain just an example, there are many more ASX gold miners who are developing their assets consistently; however, the slipping gold prices could be worrisome for them. The strong hedge book building process could support the falling share prices, but the longer-dated hedge could build some pressure on the futures curve of gold, which could be again a problem for gold prices.

However, the current valuations scenario, coupled with falling bond yields could provide some support to the gold prices, and it would be worth monitoring the gold prices ahead and its impact on the ASX gold stocks.

To know how could gold make its way to the investorsâ portfolio in the international market, and to know about the right parameters to guide your judgement better, we would like to encourage you to read: Does Gold Investing Intimidate you? Discover the Right Parameters for Astute Judgement