Are there any brewing opportunities in travel and banking space?

Travel and banking companies are perhaps the most stressed ones in the aftermath of COVID-19 led logjams. Travel sector includes a wide range of businesses that have been severely impacted by the implementation of lockdown.

Banking companies are at the risks of an increased number of delinquencies as economic picture has deteriorated sharply. It could impact the customers of banks in repaying their obligations and many could be at the risks of bankruptcy.

It is very important that restrictions are lifted, and economic activity is resumed across the world. A resumption in people movement does increase the chances of a second wave outbreak, and precautionary measures are crucial that must be embraced by society.

Recently, the bank provided an update on COVID-19 impacts. In May, it added $148.3 million to provision for potential impact of the pandemic. This additional provision would increase FY20 credit expense by $127.7 million and general reserve for credit losses by $20.6 million.

In assessing the level of provisions, BEN has not considered a sharp recovery in economy. It has assumed a slow recovery and more downside scenarios. Increase in collective provisions was undertaken assuming deterioration by the bank instead of observed credit quality. 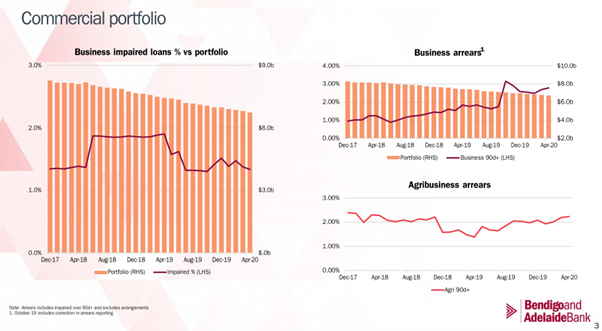 Over the past two years, the bank has continued to improve its risk profile by shifting away from real estate construction and development lending.

Recently, the Group announced re-opening of its majority of avenues. CEO, Dan Brady noted that management team was effectively managing the impact of COVID-19. They were focused on rebuilding the business with an innovative mindset.

The business has been supported by the stakeholders, including financiers, suppliers and incumbent State Governments. Now Redcape has opportunity to re-open its business with all necessary COVID-19 precautionary guidelines.

From 1 June 2020, majority of its operations in New South Wales started trading. Management believes that business is well placed to abide by the guidelines floated by policymakers, including the fifty-people limit.

Shutdowns were used as an opportunity to rebuild and reposition the business, which included acceleration in innovative and strategic projects. RDC’s data driven platform has enabled the business to remain digitally connected with the customers.

Earlier last month, the Group reported that negotiations with financiers were completed to waive some terms in the loan agreements. Lender group also gave nod to temporarily amend some covenants. Federal Government’s JobKeeper programme has allowed the business to pay employees that are eligible.

Recently, the Company reported a COVID-19 update. It was noted that NZ operations at Queenstown Drop Zone have recommenced. Several Australian drop zones are expected re-open in June consistently with measures floated by Governments. EXP has been following COVID-19 guidelines to operate safely.

Management has focused on optimising and managing cash flows efficiently, thus experiences would be activated on a break-even basis. Government wage subsidies in NZ and Australia has enabled the business to support its employees during this challenging. Around 438 employees were eligible for the subsidies in ANZ region.

At the end of April 2020, the Company had $10 million in cash and an additional $15 million under the facility with bankers. Facility agreement waivers have been granted by the bankers for upcoming testing, while asset finance lease instalments were also deferred.

Lease expenses of the business were reduced following Government policy initiatives and negotiations with landlords. EXP is also strategically selling assets to simplify the business. Senior executives and Board members have taken 30% reduction in remuneration until 30 June 2020.

Earlier in May, the Company reported that people movement restrictions were easing gradually. It had initiated a campaign for those who want to go on a ‘self-drive holiday’. The campaign was intended to promote awareness on RV holidays.

Apollo further mentioned that it was preparing for domestic travel resumption. The business had started to receive small number of bookings. Domestic retail RV orders were returning to pre-COVID levels by the start of May.

It had negotiated with financiers for the deferrals on debt repayments. Apollo has placed its USA operations into hibernation until summer of 2021. In the US, the Company was able to persuade its dealer partners for the sale of most of the USA fleet. These US fleet sales would reduce the debt substantially

The company has reduced its workforce for a sustainable cost base. It has cancelled bonuses and senior executives along with Board taking salary cuts. Apollo was in discussions with landlords for the rental reliefs. It has also closed its manufacturing operations in NZ, and Australian facility continues to operate at a lower capacity.

ATL has also applied a numerous Government support package that have been announced the countries. And, it was in discussion with the Government for additional reliefs to the industry.

Although economic impact of COVID-19 has been felt by travel and banking space, the resumption of economic activity fuelled by easier restriction will likely have constructive outcomes for the businesses in the space.