A Look At Supermarket Giants - Woolworths and Coles

Supermarkets falls into the category of retail segment and their performance is directly proportionate to the consumer demand. Weak consumption lead to fall in retail and supermarket volumes and vice-versa. During festival season, the demand for consumption of liquor, restaurants, clothing etc. remains higher which drive higher volumes for the owners of supermarkets. We will be discussing two leading names in supermarket segment which have decent presence across Australia.

Woolworths Group Limited operates as a supermarket chain across New Zealand and Australia with 3,292 stores. Recently, the company informed that one of its directors, named Siobhan McKenna acquired 48 ordinary shares under shares allocated under the dividend reinvestment plan at a price consideration of $37.0463 per share. As per a recent market update by the company, the Annual General Meeting will be held in Sydney on Monday 16 December 2019.

Operating Highlights for FY19: During FY19, BWS opened 30 net new stores which brings the total store network to 1,346. During the year, the company witnessed VOC scores and strengthened Rewards program through tailored offers, resulting in record high customer scan rates. The company reported 605 on demand stores during the year which supported double digit online sales growth. The Dan Murphy business recorded VOC at 75% followed by introduction of 35 wine merchants which improved in-store experience. During FY19, the business has done refinement on pricing strategy which has offer the best prices to the customers. Other highlights include efforts to make a real difference for families through activities like free books for kids. 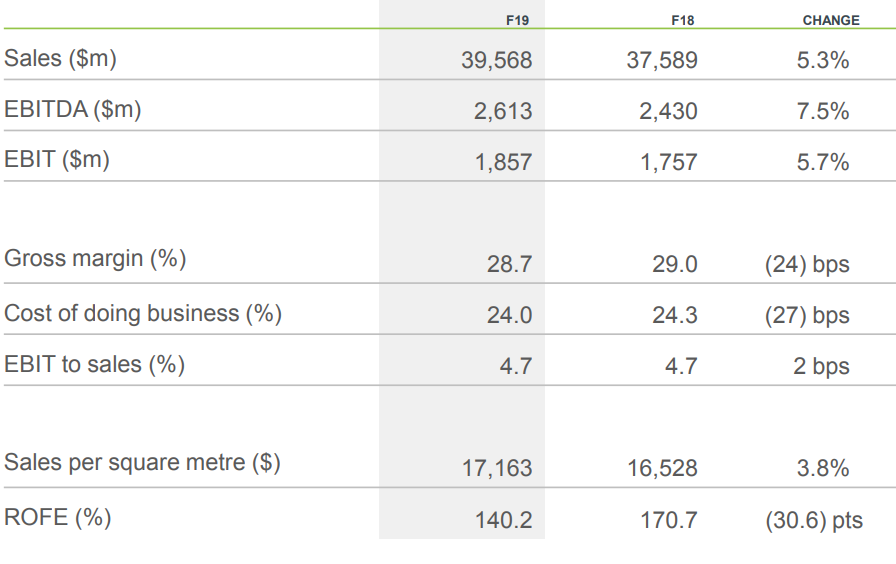 FY20 Guidance: As per the management guidance, the company is likely to open 8 new stores in F20. The management is planning to relaunch ‘My Dan’s’ loyalty program with three times more offers along with availability of personalized services driving member numbers and scan rates. The company will further upgrade its on demand delivery Launch app to provide a better customer experience. The company is targeting to complete full review of the wine products while focusing on delivering a customized range offered by the stores to enhance customer experience. The company will prioritize on the apparel segment through investment across new fixtures and innovative ranges followed by putting the clients by demonstrating real value and real solutions and real care. WOW will continue with updated pricing and promotion approach which will lead to a sustainable business model.

FY19 Financial Highlights for year ended 30 June 2019: COL declared its FY19 financial results wherein the company reported sales at $35 billion, up 3.1% on prior corresponding period basis. The company reported EBIT at $1,467 million as compared to $1,479 million depicting a decline of 0.9% on y-o-y basis. EBIT margin, during the year stood unchanged at 3.8% compared to the year-ago period.

Coles Group Limited has three operating segments namely supermarkets, liquor and express. The operating highlights of these segments are discussed below.

Operating Highlights for the year ending 30 June 2019: The business added 120 stores in online including Click & Collect locations while the company added 22 new stores in supermarkets and 27 Liquor shops.