Although, the iron ore prices are moving down from past five trading sessions, the global market is currently lagging an ample amount of supply. The prices rose earlier amid production loss from various significant miners, which created a supply shortage in the global market. This, coupled with high steel demand in the Chinese domestic market, supported the iron ore prices, which subsequently rose to a multiyear high.

Up-Rally in iron ore prices: The iron ore prices started an up-rally in late 2018, and the Brumadinho dam collapse in Brazil ignited the fire of the significant up-rally which began in February 2019. The dam incident in Brazil had put Vale- a behemoth Brazilian supplier in shackles.

The local Brazilian authorities suspended the operations of the company post the dam collapse, which marked the first step in the shortage of global supply chain. Right after Vale’s operations were suspended, another instance in Australia widened the supply gap.

The production loss from Vale and significant Australian miners created a supply crunch in the global market, which in turn, supported the iron ore prices.

Later after the supply crunch, the prices experienced a shock with the re-entry of Vale’s Brucutu mine in the supply chain; however, the mine production was again halted by the local authorities. In the recent summit in Barcelona, Vale mentioned that it would take at least 2-3 years for the company to reach the normalcy in production.

On the demand side, the steel mills in China inched up their production to take advantage of high steel prices, and the demand of the steelmaking raw material surged in the market, which provided an impetus to the iron ore prices.

Later in April 2019, the Chinese mills inched up their production, which further boosted the iron ore prices. The prices remained in an uptrend till the beginning of June 2019.

Downturn in iron ore prices: In the recent event, the iron ore prices took a jab despite the shortage in arrivals across the significant Chinese ports amid the concern over the global economic growth, which took roots in the investors’ mindset over the re-escalated U.S-China trade war, which has now reached Mexico and India as well.

Stock Performance: The share prices of the company are in a continuous uptrend from the level of A$30.310 (Day’s low on 28th November 2018). BHP has marked a rally for four consecutive months (December to March). The prices hit a high of A$40.130 (09th April 2019) and are moving in a corrective phase since after.

Project Updates: Recently, the high Environmental, Social and Governance (ESG) consideration led BHP to stay out of the coal and cobalt business, which certainly gained attraction of ethical investors; however, the potash outlook of the company now seems to be under a dilemma, as growth of the fertiliser component sector is slower than initially projected by the company.

Post making an initial investment of US$2.6 billion on its Jansen (Canada based project), BHP publicly announced to invest further US$5.3 billion in the project, whose strings are controlled by the global growth scenario. As per the company, as the population reaches an upper-deck of the social class, it would include more protein diet in the food, which could potentially boost the demand of potash in the fertiliser, as it could boost the farming yield with high-protein.

The dependency of the project is upon the global growth, which is now keeping BHP in a dilemma over a further US$5.3 billion investment as the project requires a substantial amount of money tranche.

Stock Performance: The share prices of the company moved in a continuous uptrend from the level of A$69.240 (low in December 2018). The shares of the company rose for six consecutive months and recently reached a 52-week high of A$107.990.

Along with the high iron ore prices, the multi-commodity prospective of the company supported the share prices on ASX. The investors take an interest in the company over its strategic investments in copper, potash, energy, and lithium projects.

The United States Forest Service department is reviewing the project and once operational it could meet 25 per cent of copper demand in the United States. With copper inventory expected to deplete over the long-run, which could create a supply shortage, holding and developing such a project looked strategic to the investors and the share prices of the company reflected the market consensus.

Apart from investment in a copper project, Rio’s potash project is also on track and moving towards completion and is estimated to be in production within five years.

Rio is currently conducting a pre-feasibility study (PFS) on its Jadar project in Serbia, which the company discovered in the year 2004. As per the company, the lithium sodium borosilicate mineral (or Jadarite as the company calls it) has high lithium and boron concentrations, which could put the company in the primary play.

Rio is already a significant player in the boric acid market, and further extended resources could help the company to establish dominance in the market. However, considering the lithium component of the Jadarite, the company might want to time the production of it as the lithium market is currently oversupplied and additional supply through Jadar could drag the prices significantly down in the international market.

Despite the decline in production in March 2019 quarter, the share prices of the company took the support of high iron ore prices.

Operational Performance: The company shipped 82.7 million tonnes of iron ore in the first half of the FY19 and commenced the shipment of west Pilbara fines during the same period.

The high realised prices of iron ore supported the share prices of the company, which indemnified the lower production for the quarter.

In its recent presentation, FMG focused on the operating mills' margin in China, which remained significantly high and in turn, pushed the iron ore prices up in the global market. 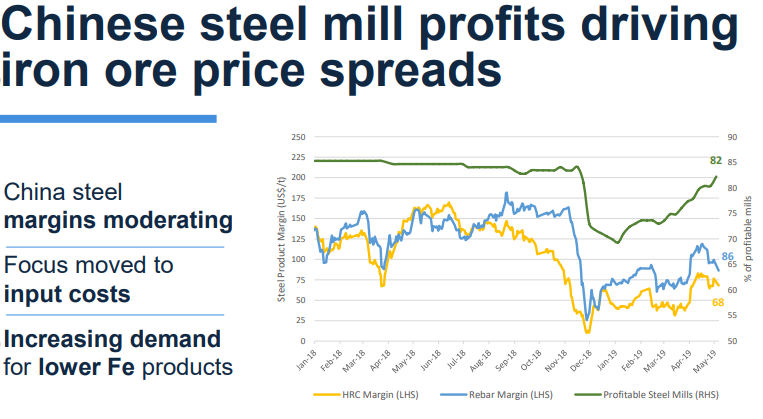 The production of different product and fines for the third quarter of the financial year 2019 is as follows: 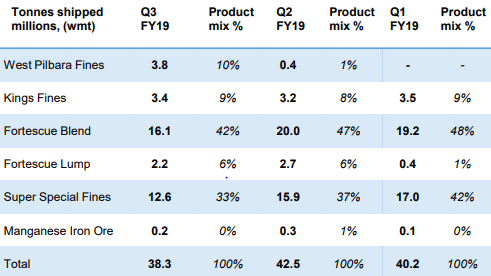