Amidst growing trade-war tiff between the US and China, Chinese government has recently expressed its intention of restricting the exports of rare-earth minerals, a set of 17 metals difficult to mine. China is the leading contributor to worldâs rare earth metals supply, vital to many modern technologies such as electronics, computers, missiles, etc. The supply disruption is expected to cause massive supply chain breaks in the essential metals.

Rare earth permanent magnets create electric motors with greater torque, efficiency and range. While China would be establishing a timeline to phase out combustion engine vehicles, UK and France are expected to ban petrol and diesel vehicles by 2040, according to the market participants. New electric taxis have been launched in London; Volvo would also go electric and every Jaguar Land Rover model line is planned to be electrified from 2020 onwards. In addition, India is also aiming for all?electric car fleet by 2030.

Letâs look at the following five companies from the Australian Rare Earths space that are operating at a time when dynamic changes are transpiring across the world.

Lynas Corporation Limited (ASX: LYC), headquartered in Kuantan, Malaysia, primarily explores for and develops rare earths metals in Australia and Asia. Currently, the company is focussed on developing the Mt Weld Rare Earths Project in Western Australia. With a market capitalisation of AU$ 1.75 billion and around 667.8 million outstanding shares, LYC settled the dayâs (5 June 2019) trading at AU$ 2.730, edging up 4.19% by AU$ 0.110. 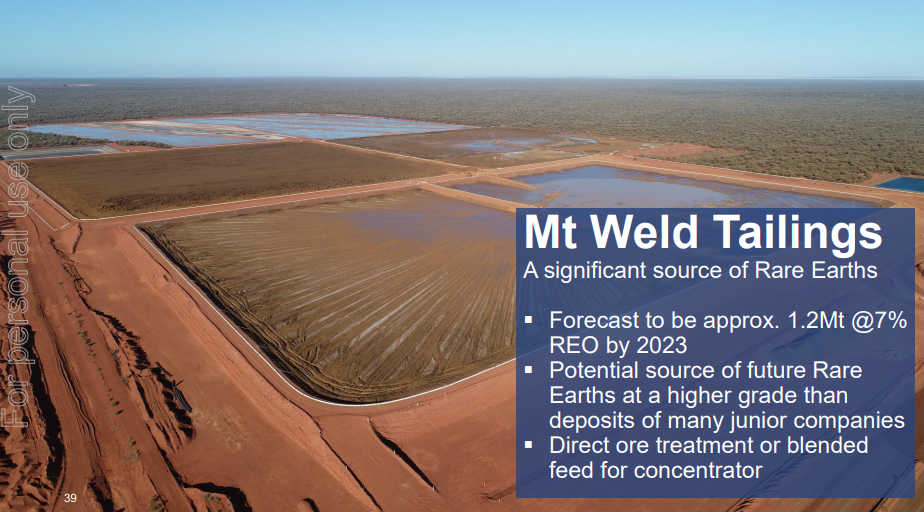 On 31 May 2019, Lynas Corporation announced that its bondholders had converted a further portion of their convertible bonds (issued on 28 February 2012) from debt into equity at a consideration of US$ 1,589,867.86 in total. As a result, the principal amount of Lynasâ debt facilities were reduced to- JARE Facility with US$ 146.90 million and Convertible Bond Facility with US$ 13.65 million.

The reduction of debt is crucial to improving the companyâs balance sheet as Lynas continues to position itself for future growth. Also, as a result of the recent bond conversion, the company issued ~ 2,119,823 new ordinary shares on the day of the announcement.

On the same day, Lynas Corporation informed the market of the comments made by the Malaysian Prime Minister about Lynas at a press conference on 30 May 2019, acknowledging the importance of the continuation of the Lynas operations in Malaysia.

On 21 May 2019, Lynas released its Investor Day Presentation touching upon the companyâs strategy, its track record so far that underpins the future growth, a snapshot of the market for NdPr Oxide, the application of Rare Earth technology in electric vehicles, the roadmap ahead and development and further growth opportunities.

Greenland Minerals Limited (ASX: GGG ),headquartered in Subiaco, Australia, is engaged in exploration and evaluation of rare earth elements, uranium, and zinc in Australia. It is currently advancing works at the Kvanefjeld Multi-Element Project located in southern Greenland. 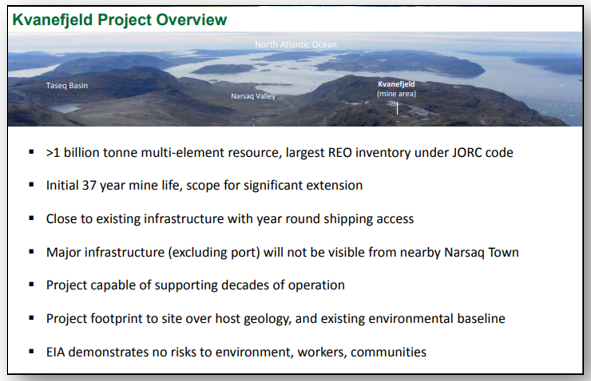 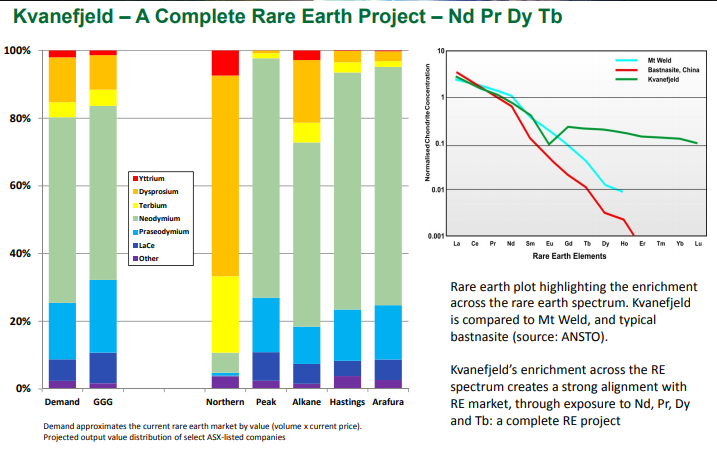 With a market capitalisation of around AU$ 130.25 million with ~ 1.13 billion outstanding shares, the GGG stock settled todayâs trading at AU$ 0.115 with ~1.19 million shares traded.

On 15 May 2019, Greenland Minerals disclosed an update on the performance of the optimised rare earth refinery circuit for the Kvanefjeld Project, which is underpinned by the worldâs largest code-compliant rare earth resource, and the positive economic implications.

The continued development of the refinery circuit in 2018 has confirmed impressive rare earth recoveries of 94%, an 8% increase relative to the 2016 Feasibility Study (FS) inferences and an increase of US$ 31 million per annum in revenue at current rare earth prices. It has also revealed a 40% reduction in annual operating costs, relative to FS, and the unit costs have also been toned down to US$ 4 per kg rare earth oxide (net of by-products credits).

Western Australia-based, Peak Resources Limited (ASX: PEK) is a mineral exploration company focussed on exploring for and development of gold, base metal, and uranium prospects within Western Australia.

Recently, Peak Resources reverted to an ASX query lodged on 29 May 2019 concerning the change in the price and increase in trading volume of the companyâs securities from 27 May 2019 till 29 May 2019. The company stated that although there was no particular reason behind its stock performance, the recent increase in rare earth prices quoted out of China, which have indicated an increase of ~27% in the Chinese Domestic NdPr oxide price in the last 14 days, could be an indirect cause of the same.

Besides, Peakâs 75%-owned Ngualla Rare Earth Project has ~90% of its projected revenue to be attributable to NdPr oxide. Consequently, any increase in NdPr price would have implications for the economics and potential returns of the Project.

In addition, another development impacting the rare earth industry is the intensifying trade war between the USA and China.

According to the companyâs quarterly report for the three months to 31 March 2019, Peak Resourcesâ summary of Mining Tenements and areas of interest is as follows:

The company spent around AU$ 627K into operating activities including development initiatives, staff costs and other corporate costs. The net cash as of 31 March 2019 was around AU$ 3.28 million.

Arafura Resources Limited (ASX: ARU), based in Perth, is a mineral exploration and development company operating solely in the Northern Territory of Australia. Its principal commodities of interest include rare earths, phosphate, gold, nickel, and vanadium. Currently, it is focussed on developing its 100%- owned Nolans Rare Earths (NdPr) Project located in the Northern Territory.

According to the companyâs Quarterly Activities report for the three months to 31 March 2019, the Definitive Feasibility Study (DFS) released for the Nolans Neodymium-Praseodymium (NdPr) Project positions it as globally and strategically significant project from a financial and technical viewpoint. It is 100%-domiciled in Australia with low political risk and expected to support a long-life operation. The PFS also delivered robust project economics.

A snapshot of the key project information set out in the DFS is given in the figure below. 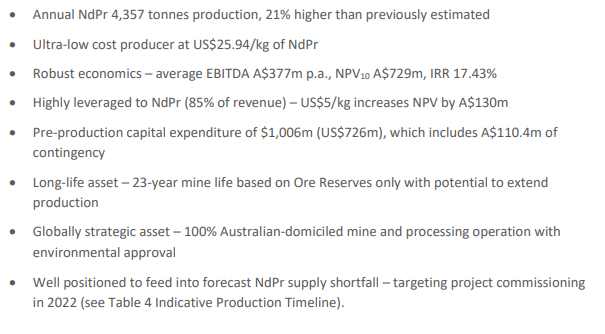 The DFS also incorporated an estimate of Ore Reserves for the Project, tabulated as follows:

The key project is the Dubbo Project, a large in-ground resource hosting hafnium, zirconium, yttrium, niobium, and other rare earth elements. With a potential mine life of over 75 years, Dubbo is well placed for development, subject to financing, with the State and Federal approvals sought and the mineral deposit and surrounding land acquired. 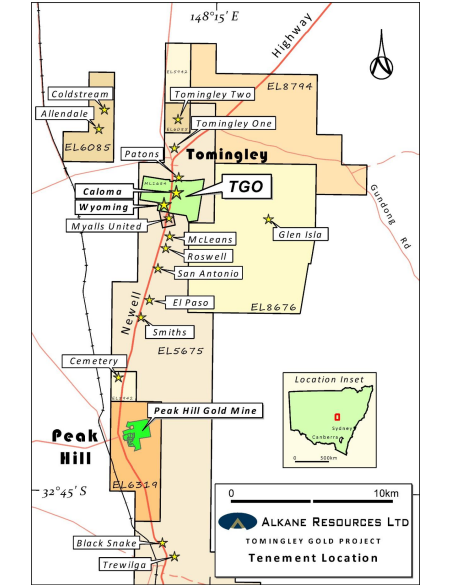 As per another update released on 17 May 2019, the company updated the stakeholders that an extensive regional exploration program at Tomingley Gold Project over the last year, focussed on the Roswell, San Antonio and El Paso prospects. The reverse circulation drilling at the El Paso prospect intersected significant gold mineralisation.