The fashion industry in Australia has unfolded competition from in house retailers as well as online businesses. Multinational retailers and global growth and advancement of online shopping have impacted the business and has resulted in more than 50 stores to shut down. However, global fashion stores have made their way to Australia. H&M, Zara and other famous brands have gained their market share. Also, there are some stores like Orotan group that have managed to survive the competition from cheaper and more fashionable brands.

At present, fashion has evolved in many senses, for instance, lower costs and ready availability, impacted by an environmental and ethical impact on every stage of production. Despite all of the factors mentioned above, Australian fashion is still a big business.

Let us see how fashion stocks are performing!

Significant Growth in the Group’s Operations and Underlying Earnings: The company acquired five brands from Specialty Fashion Group which led to the increase in revenue by 136.8% to $881.9 million from $372.4 million. The company has achieved the anticipated synergies and merger benefits ahead of schedule and have recognized additional efficiencies. During the year, statutory after-tax profit of the company was $8.2 million as compared to $17.3 million in the previous year. This was mainly due to restructuring costs and additional depreciation relating to the Specialty brands.

Growth Opportunities: Over the past 5 years MOZ has grown to be one of the largest fashion retail groups in Australia. The company is expecting to grow new categories and deliver online exclusives. It has also rolled out a new category website with respect to Beauty, Homewares and Luggage. It is also anticipated that FY20 earnings would gain from additional efficiencies and margin improvements due to the Group’s focus on profitable sales.

For the period ended June 2019, EBIT (Earnings before Interest and Taxes) went up by 2.8% to $52.5 million. The company continued its global rollout strategy and opened 64 stores during the year, resulting the total sales to increase by 15.3% to $250.3 million. In the same time span, gross profit of the company increased by 16% to $201.4 million. This was mainly due to the benefit of favorable USD hedge rates through the year.

The increased profitability resulted in the payment of fully franked final dividend of 15.0 cents, representing an increase of 1.0 cent on the prior comparable period.

Strong Balance Sheet with Significant Capacity: During the year, the company reported a strong balance sheet with investment in fitout and inventory for new stores and e-commerce implementation funded from existing cash.

Growth Opportunities: The company is focusing on the expansion of store networks and expect an increase in store numbers. It will also invest in support structures in the US, to support store network growth and the larger business.

Kathmandu Holdings Limited (ASX: KMD) is a retailer of clothing and equipment utilised during travelling and adventure purposes. As on 3 January 2020, the market capitalisation of the company stood at $929.48 million. In the recently held Annual General Meeting, the top management of the company stated that the company delivered four years of consecutive sales and profit growth.

Completion of Rip Curl Acquisition: The company has recently announced the completion of the Rip Curl acquisition at an enterprise value of $350 million on a debt-free, cash-free basis, following which the company has announced some changes in the scope of the Senior Manager roles. It has also completed the retail bookbuild component of its fully underwritten accelerated entitlement offer, 1 for 4 pro-rata. The company expects to raise NZ$145 million from the offer.

Decent Rise in Net Profit after Tax: For the year ended 30 June 2019, NPAT of the company went up by 13.7% to $57.6 million. The rising profit convinced the board to declare a final dividend of 12 cents per share, resulting in a record payout of 16 cents per share. 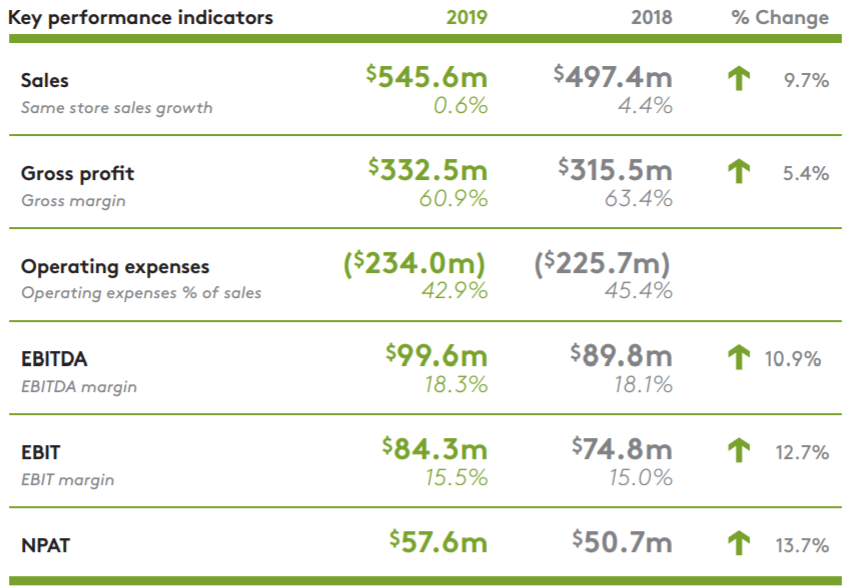 Australia based, Michael Hill International Limited (ASX: MHJ) operates in the retail sale of jewellery and associated services sector in the regions like Australia, New Zealand and Canada. As on 3 January 2020, the market capitalisation of the company stood at $269.5 million.

In the recently held Annual General Meeting of the company, the top management stated that FY19 was a transitional year. Despite a challenging Q1, sales performance recouped throughout the subsequent quarters. The company also delivered a cost out program for annualised cost savings of $5 million.

For the year ended 30 June 2019, statutory NPAT of the company stood at $16.5 million. This was mainly due to one-off employee remediation provision, inventory impairment and other one-off items. This resulted the company to declare a dividend of 4 cents per share.

Stock Performance: The company is focusing on cost of doing business and is implementing a more sophisticated and integrated customer-focused retail operating model. As per ASX, the stock of MHJ gave a return of 2.21% on the YTD basis and a return of 2.96% in the past 30 days. The stock is currently trading at $0.700, up by 0.719% (at AEDT 1:56 PM) and is inclined towards its 52-weeks’ high level of $0.790. In terms of valuation, the stock is trading at a P/E multiple of 16.31x and is earning an annual dividend yield of 5.76%.

Rise in Earnings per share: Accent Group Limited (ASX: AX1) owns and operates a number of footwear and clothing divisions in the performance and active lifestyle segments. As on 3 January 2020, the market capitalisation of the company stood at $1 billion.

Outlook: The company is on track to open at least 40 new stores and continues to perform in line with expectations. The company has also rolled out MyFit 3D, latest foot scanning technology and agreed to purchase remaining New Zealand franchisees in February 2020. AX1 is targeting sales of $15 million in FY20.