If youâve ever been online, youâve heard the rumours about Millennials. The name is used as a catch-all term liberally applied to 20-something âsnowflakesâ who have more smashed-avocados than sense. Millennials take a lot of heat for many of the disappointments of modern society, from creaking institutions to their own financial anxiety.

But, speaking as an avo-loving Millennial myself, I feel inclined to point out that theories that demonise the young are often just that: theories. So, letâs unpack a few of the personal finance myths within the stereotype and figure out how Millennials are really managing their money differently to the generations that have come before.

While weâre myth-busting, first thingâs first: âMillennialâ does not apply to all young adults. The category is generally defined as reaching from 1981 - 1996, the group otherwise known as Generation Y, and they are Australiaâs largest age group at roughly 4 million. Gen-Z (1996 - ) is generally lumped into this category, except when being derided with their new internet nickname âZoomers.â

But letâs focus on Millennials: mid-20s to late-30s adults who are coming into their financial prime, and who will soon be the biggest money makers and spenders in the economy. 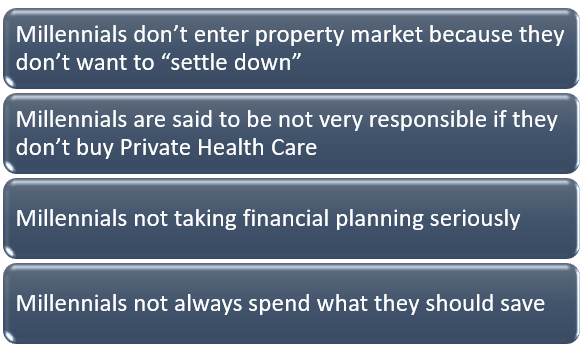 Another nickname lobbed at Generation Y is âGeneration Rent,â and with good reason. According to a recent survey by Finder, during the 20 years between FY 1997-98 to 2017-18, the proportion of Australians renting has grown from 28% to 32%. Within renters in 2019, the most represented population group is woman aged 25-29, with an average income of $50,000.

Some have used the growth of renting among young people to label the group as flaky and unwilling to settle down, but a realestate.com survey suggests that 79.9% would own a home if they could. The more likely culprit for this trend is the soaring house prices, flat wage growth and big increases to student loans Australia has been through, compared with when Gen X hit the first home-buyersâ market.

A whopping 40% of young renters have reported they live in a state of ârental stress,â which is defined as spending more than 30% of the household income on rent. The significant proportion of money spent on immediate housing needs leaves the average renter little to stash away for a home-loan deposit. Preferences aside, renting has become so expensive that a huge number of Millennials cannot afford to save for home ownership.

Millennials might be dropping out of the Private Health sector. As reported in the 2018 ACCC report on Private Health Insurance, less and less Australians are opting for private health coverage. That said, it is insulting to suggest this is simply down to irresponsibility.

Insurance premiums have been growing disproportionately faster than wages and inflation, and young people are being priced out of the market. Between 2016-2018, the proportion of Australians in their 20s whose insurance covered hospital visits (the costliest coverage) fell by 8%, according to a research published this year, and there is no sign that this trend is turning around.

It is not just falling disposable income that has created such a big decline in health cover, but the fact that by nature of their youth, Millennials donât really need cover just yet. In Australia, health insurers are not allowed to differentiate insurance premiums based on aged, so everyone is charged the same. This means that young, healthy people are the most important customers for an insurance company, because on an average they need a lot less treatment than everyone else, so their premiums subsidise the expensive needs of aged participants in the market. As pointed out by Stephen Duckett, director of the health program at Grattan Institute in the AFR update, this is not a good deal for young people.

The decline in private health plans is a serious problem for the entire healthcare sector. Thereâs the obvious problem of greater stresses on our publicly funded healthcare system, which will divert government resources from other areas and stretch limited resources even thinner. But perhaps more significantly, if Millennials cannot be incentivised back into the paying for healthcare, the system will become too expensive for all. Itâs a sticky situation that will probably take complex policy approaches and reform, not sweeping generalisations about how the young should spend their money.

Get ready for a surprise; though characterised as not very responsible with the money and a little frivolous with purchases, Millennials are more likely to have a written financial plan (34%) compared with both Gen X (21%) and Baby Boomers (18%). They are also more likely to pay a professional financial planner to write this plan, and more likely to review it annually. Further, they usually to look at their accounts and get an idea of the fees they pay.

Whatâs this about? Well, for one thing, Millennials have less disposable income than their predecessors, meaning the interest in financial planning could be more about necessity than anything else. But there is also technology available now that makes this planning easier than it was for previous generations. Internet banking, budgeting apps, electronic financial tracking â these digital tools provide tech-savvy Millennials more immediate access to their finances than ever before. Perhaps, it is time that older generations took advantage of such tools as well.

Okay, so this is a complicated one. Factors such as climbing tuition prices and falling real income exacerbate the lack of savings and rising debt levels for this age group, but most studies suggest that Millennials still spend more than previous generations.

Driven by the conspicuous consumption of friends and celebrities on social media, Millennials feel driven to spend on clothes, fancy restaurants and other outings â all of which can be shared online. So yeah, this myth has got some truth behind it.